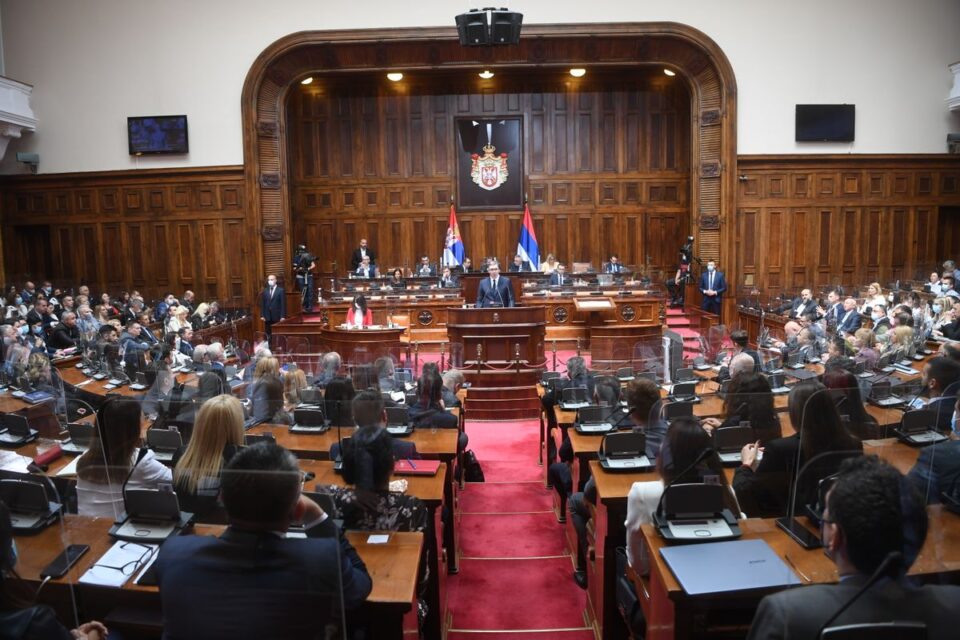 For the second time of his presidency, Aleksandar Vučić publicly addressed the National Assembly of Serbia on the state of the Belgrade-Pristina Dialogue. His Tuesday speech was more or less the same as the one delivered in May 2019, which did not have a visible political impact, and it is hard to assess whether this one would have it either.

The 2019 and 2021 speeches essentially bore the same message – compromise is necessary because a frozen conflict would lead to renewed fighting between Serbs and Albanians.

“What I think is important for the people to know is that a frozen conflict cannot be our solution, the Albanians reject it. Albanians do not want it and that is why they are showing increasing nervousness day by day. And that is why it is a matter of time when they will attack the Serbs”, Vučić said in May 2019.

“It is our job… to look for a compromise solution every day, because without it someone will unfreeze that conflict one day, and then, whatever we do and no matter how it all ends, I would have to tell someone’s mother – I’m sorry you don’t have a son anymore, but, at least we’ve achieved a great victory”, Vučić said.

While he maintained that the compromise is the only solution, Vučić was explicit this time about the fact that he did not know what it would entail.

“I want to repeat – a compromise solution is the only possible solution, but if you ask me what a compromise is, I will tell you – I don’t know. However, we all have to reach a compromise together. If we fail to do that, we will leave this problem to future generations”, he stated.

The only thing that seems to be off the table is the official recognition of Kosovo by Serbia. According to Vučić, he told Prime Minister Albin Kurti during their first and, so far, only official meeting in Brussels, that he would never recognise Kosovo, which triggered applause from the MPs.

These key moments, however, took up only several minutes of an otherwise 75 minutes speech, which also included a detailed review of financial assistance provided to Kosovo Serbs, Serbia’s own economic projections, as well as demographic projections which, according to Vučić, speak in favour of reaching a compromise solution.

Marko Savković, Executive Director of the Belgrade Fund for Political Excellence, says for European Western Balkans that this speech has a double purpose.

“The message about the “frozen conflict” is for both internal and external use and comes down to “whatever it is, the Dialogue must continue”, i.e. “in order not to escalate as happened in the Caucasus, you – the foreigners – are still needed”. There is one part of that narrative that seems meaningful to the local population – the time for dying is over, now is the time for work, which is also highlighted by the message of the need to overtake the “others” in market competition”, Savković says.

In the context of the still highly emotional topic of Kosovo in Serbia, it remains hard to entangle who received what message from the speech.

Is the public being persuaded?

The day following this week’s speech, Politika and Blic were the only daily newspapers to mention the need for a compromise in its headline, with Politika quoting the President that this was the “only solution”.

On the other hand, other pro-government newspapers included headlines such as “If Kosovo was a country, Kurti would not be coming to the negotiations” by Informer, “I am not a deserter: I won’t sign the recognition of Kosovo” by Večernje Novosti.

“For years, President Vučić has managed to send the message that it is necessary to work on reaching an agreement, but also to calm those radical elements in society who are against reaching any agreement with the Kosovo Albanians. His political and social engineering is often reflected in the fact that members of his party and coalition partners often speak contrary to what he advocates in public presentations, which further confuses the public and calms the opponents of the agreement. In the coming period, we will probably witness the continued use of this model of communication”, assesses Dragiša Mijačić, Chair of the Working group for Chapter 35 of the National Convention on the EU, a coalition of CSOs.

He believes that the messages sent by the President are important and that it is always good to hear them again, regardless of the results achieved in the Dialogue, or the attitudes of citizens on this issue.

“They (the attitudes) are often contrary to what the President is saying. However, the latest public opinion polls show that more and more citizens believe that a solution needs to be found to normalize relations between Serbia and Kosovo”, says Mijačić for EWB.

According to the compilation of polls analysed by Belgrade Centre for Security Policy in March 2021, the public support for the Belgrade-Pristina Dialogue in Serbia has remained at the level of between 50 and 60 percent since 2012, but the opposition to the Dialogue has decreased from around 40 to less than 30 percent during that time. A large percent of the population, 83, believes that the Dialogue should continue regardless of the pressures of the international community, which is a noticeable increase in the past ten years.

That is, however, one of the only few clear messages for the policy-makers. When it comes to the content of the Dialogue, more than 50% of the citizens, in various recent polls, claim not to know what the policy aims of the Government and the President are. Not one potential option for a resolution of Kosovo’s status has a decisive public support. The only unambiguous finding is that the vast majority of the public is against the recognition of Kosovo by Serbia, with less than 15% of the citizens being open to it in nine recent polls analysed by BCSP. The situation does not change even if the citizens are guaranteed EU membership in return.

The communication strategy used by the President and his party obviously keeps the support for the Dialogue itself at a high level, but whether there will be enough support for any proposed solution remains to be seen. The idea of border change, promoted by President Vučić a couple of years ago and revived recently by a series of non-papers, never managed to get the support of the majority, according to BCSP research.

Hard to expect a political consensus

There were no signs that Vučić’s 2019 report to the parliament had caused significant political consequences for the Serbia-Kosovo normalisation process.

At the time, EU was preparing for the European Parliament elections and the subsequent formation of the new institutions. Meanwhile, Belgrade-Pristina Dialogue was put on hold by the introduction of the 100% tariffs by the Kosovo Government the previous fall. Two months after the speech, Ramush Haradinaj resigned as Prime Minister of Kosovo following his indictment by the Hague Specialist Chambers, and Kosovo went into a long period of political uncertainty, emerging from it only in spring of 2021, with the election victory of Albin Kurti and Vjosa Osmani.

“The 2019 speech essentially did not have any political consequences. The Dialogue depends, of course, on the internal dynamics, but also on the movements in international relations”, says Marko Savković.

Vučić’s decision to address the parliament was a political one since there are no official acts regulating his responsibilities within the Dialogue. The only two times he addressed the parliament on this issue since becoming the President was at the time when there was virtually no opposition present – in 2019, this was due to the decision of the elected opposition to boycott the parliament, while in 2021, following last year’s partially boycotted elections, there are only six opposition MPs anyway.

Asked why the President chose this moment to deliver his report to the parliament, Savković says that, following the series of new non-papers and proposals that have emerged in the meantime, and the ever-present criticism that the parliament does not follow and participate enough in the dialogue, it made a lot of sense to appear in the National Assembly.

“However, the answer to one of the key questions – what does Belgrade really want from the dialogue – is still missing”, he concludes.

Dragiša Mijačić underlines that the broad public discussion on the normalisation of relations with Kosovo, a complex and emotional issue, is very important. He sees the discussion in the parliament as a part of these efforts.

“We, as a society, do not have the right to close our eyes to this problem, but everyone in their area of action must find a way to get involved in a public debate that would lead to the search for a socially acceptable solution to the Kosovo issue”, he stresses.

The ruling party has been sending mixed signals on its intention to have a broad debate on this issue for years. In the summer of 2017, newly elected President Vučić called for an “internal dialogue” on Kosovo, which included representatives of the civil society. Ultimately, no official conclusions from the dialogue were published nor have there been any signals that this consultation process has significantly impacted the government’s and President’s Kosovo policy.

Then, just before his speech this week, Vučić held a closed discussion on Kosovo with the opposition parties who participate in the inter-party dialogue on electoral conditions without the mediation of the European Parliament, the first such event since becoming President. This confusing criterion of choosing the interlocutors might be explained by the still very tense relations between the ruling party and the opposition parties that accept only EP mediation, which translates to all areas and not just the disputes over electoral conditions.

In any case, in addition to the public opinion, the consensus between the political parties on the goals of the Belgrade-Pristina Dialogue, provided that Vučić and his associates know what the exact goals are, seems extremely far-fetched at the moment.