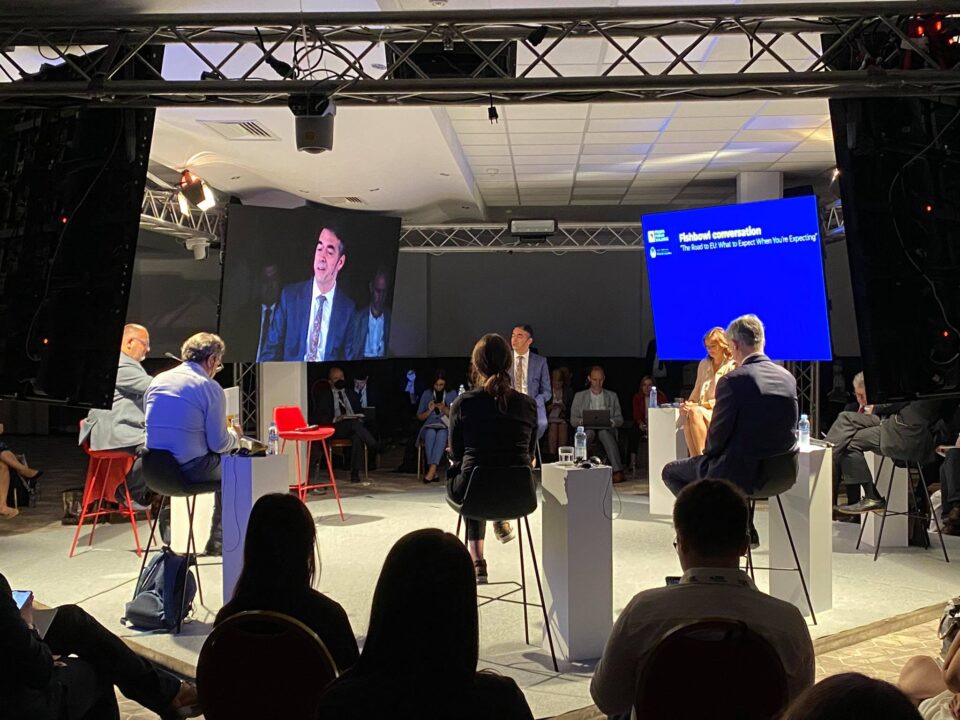 Nikola Dimitrov and Tanja Fajon with other participants of the conversation; Photo: EWB

OHRID – The current state of enlargement to the Western Balkans is negative, assessed the participants of today’s conversation “The Road to EU: What to Expect When You’re Expecting” organised within the Prespa Forum Dialogue. Another Bulgarian veto to North Macedonia was harshly criticised, while the EU was invited to restore the credibility of the process.

The event, held in a “fishbowl” format in which the members of the audience were able to take the centre stage, was opened by the Deputy Prime Minister in charge of European Integration Nikola Dimitrov.

“This is great timing for this topic and our gathering. However, we have to be honest and open – it is the worst time possible. For the second time, Bulgaria vetoed the accession talks with North Macedonia and Albania. It has been two decades since we started the talks with the EU. We do not know whether to expect it anymore”, Dimitrov said.

“If the EU cannot make a difference in the region, which is not even its backyard, but its courtyard, it is telling about the problem the EU faces. The long-term consequence will be the weakening of those who believe in the transformative process of the enlargement and in European values”, Dimitrov said.

He stressed that the Government of North Macedonia did not have the right to give up in making our country more European. However, it would be good if there was some help from the EU.

Member of the European Parliament Tanja Fajon reminded that her country, Slovenia took over the Presidency of the Council of the EU today, adding that she was not very optimistic about it, but at least the Western Balkans was among the Presidency’s priorities.

She added that it was a shame that after 15 years, the region is still talking about whether only to open the negotiations with North Macedonia.

“A lot of selfishness, a lot of egoism in the past years, as well as dangerous nationalism. For a country – Bulgaria – to jeopardize another country – this is selfish and dangerous”, Fajon said.

Journalist Tim Judah agreed that after 15 years since North Macedonia received the candidate status, there is not much new to say.

“It is true that malign actors will interfere when there is no EU integration, that the process is necessary for internal reforms, but we are not moving”, Judah said, adding that, increasingly, the problem is not in North Macedonia, but in the EU.

We don’t know what the future of Europe is, and that is why the membership of the WB is a moving target. In ten years, it will be a different EU, Judah said.

Professor at the Johns Hopkins Institute Edward P. Joseph said that the US never wanted to be ahead of the EU in the Balkans.

“The EU cannot be the world leader without taking the Balkans seriously. And the EU is not being taken seriously. I am saying this with sadness as an American, because the EU is our ally”, he said.

According to him, to fail to honor what North Macedonia has done is a historic mistake. When it does it for a second time, he said, that is a betrayal.

“If the EU aspires for strategic autonomy from the US, it needs to solve the issue of Balkans first”, Joseph underlined.

Senior Policy Analyst with the European Policy Centre and a member of BiEPAG Corina Stratulat, who joined the discussion via video link, said the fact that the enlargement was in the hands of the Member States created unpredictability.

“Unfortunately, I am tempted to say that we are about to see more of the same. Change would also require the better toolkit when it comes to offering solutions to the detected problems”, Stratulat added.

Jacques Maire, member of the French National Assembly, said that, for him, it is not a question of whether, it is the question of when the next step will be taken with North Macedonia.

“We will do everything we can to help the Slovenian Presidency to achieve this goal”, he said, reminding that the French Presidency comes next.

Student representative Eva Cvetkovska said that most young people, including herself, firmly believe in European values.

“By saying I believe in the European idea, I do not follow it blindly. The most European thing to do is criticising inconsistencies in the EU. Dispute with Bulgaria can be solved through dialogue, but right to self determination, identity cannot be a topic of the discussion”, she stressed, warning that, due to the current situation, nationalist sentiments and Euroskepticism is on the rise in North Macedonia.