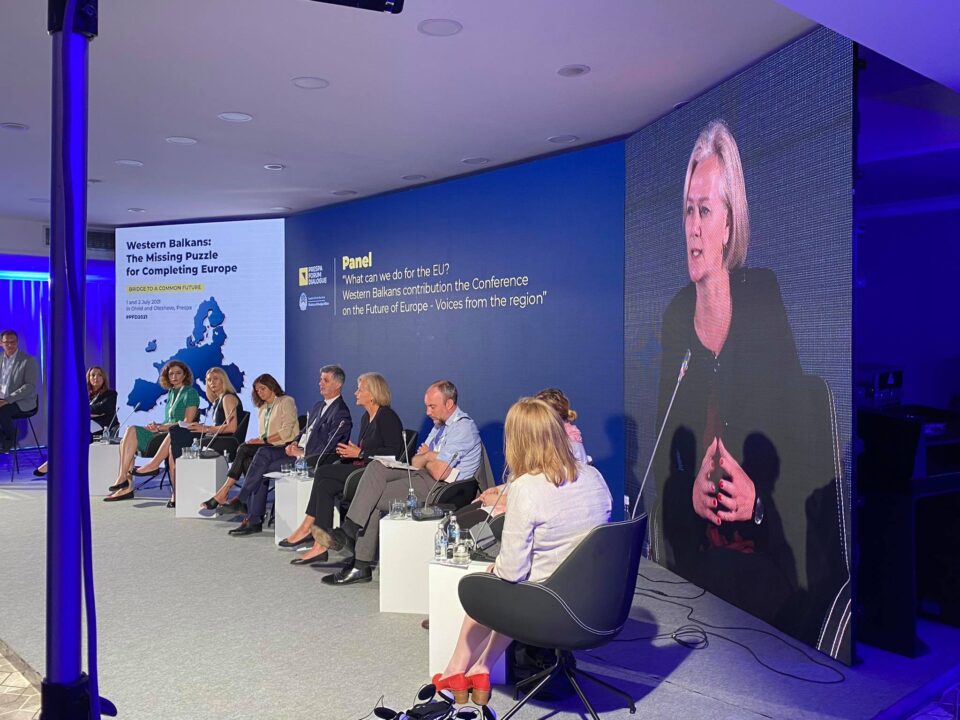 The article is also available in Albanian, Macedonian and BCMS languages.

OHRID – Security issues, global policy of the European Union, as well as the enlargement, are some of the areas in which the Western Balkans can contribute to the Conference on the Future of Europe, stressed the participants of today’s panel at the inaugural Prespa Forum Dialogue in North Macedonia. The involvement of the citizens in the Conference as a whole was described as insufficient by some participants, while others reminded that the process was new and could be built upon in the future.

Member of the French National Assembly Jacques Maire described the launch of the Conference as a risk that was worth taking.

“Of course, in this regard, there is also expectations from the Western Balkans. We understand the request for visibility and participation, we expect from them to contribute and come with the solutions to problems regarding the enlargement”, he said.

“There is a lot of knowledge and expertise in the region, but also a lot of creative people who have experience with topics of the Conference, such as migration”, said Aleksandra Tomanić, Executive Director of the European Fund for the Balkans. She pointed out that the citizens of Bosnia and Hercegovina have been experiencing migration flows going through their country in recent years and that their insights would be valuable.

Tomanić also posed a question of how the Conference can have the topic “EU as a global player” without involving a part of the continent. She added that, due to the high level of air pollution in the Balkans which is also felt by the neighbouring EU countries, any discussion on environment in the EU will be incomplete without involving the region as well.

Donika Emini, Executive Director of the CiviKos Platform from Kosovo and a member of BiEPAG, focused on security as a potential contribution of the Western Balkans.

“Western Balkans can contribute to the discussion on security issues, because the region has, in a very short time, from security consumer become a security provider”, Emini said, adding that a lot of countries learn from Kosovo how to fight against terrorism.

Another perspective where the Western Balkans can naturally contribute is enlargement. According to Emini, the region should be an “easy win” for the EU, showing that the Union can be successful, with the help of the inputs from the region.

Jovana Marović, Executive Director of the Politikon Network and a BiEPAG member, agreed that enlargement is an area where the WB can contribute to the debate, for example by proposing reforms to the process such as the introduction of the quality majority voting at the interim steps of the process, as well as ways in which the region can gradually integrate with the EU.

“Involvement of the citizens and politicians of the WB in the Conference on the Future of Europe should be understood as a gradual integration, which should help contribute to the rule of law and democracy in the region”, she said.

Roderick Parkes, Head of Alfred von Oppenheim Centre at the German Council on Foreign Relations focused on EU’s role in the world, saying that the process like the Conference is a good opportunity to push back against a negative perspective on EU’s geopolitical role.

“I think the argument should be that the EU is actually good at geopolitics, and this is why it should be involved in the region, not because of the competition with Russia or China”, Parkes said.

Involvement of the citizens still a challenge, focus on the young people

Multiple participants, including Aleksandara Tomanić and Alba Çela, Executive Director at the Albanian Institute for International Studies, stressed that the involvement and awareness of the citizens of the Western Balkans was still at a low level. Member of the European Parliament Tanja Fajon stated that this was the case even in the EU countries.

“It’s become unattractive to talk about European issues, because political elites often blame Brussels for the things that go wrong. Our young generations do not have the historical perspective of the reasons the EU exist – we need a new narrative for them”, Fajon said.

She added that the Conference on the Future of Europe should be a reason for optimism.

“But if we don’t bring the discussion to the citizens, we will fail”, Fajon said.

Professor at the Faculty of Political Sciences in Sarajevo Nedžma Džananović also stressed the importance of young people who, in her view, will be interested to contribute to the discussion, with the youth from the Western Balkans being even more focused on the EU values than the rest of the continent, because their counterparts had the privilege to take them for granted.

Angelina Eichhorst, Managing Director for the Western Balkans at the European External Action Service, touched upon the potential shortcomings of the process, saying that this was something new, a sort of experiment, involving the European Commission, the European Parliament and the Council.

“We don’t know what will happen, but the courageous politicians make such decisions”, Eichhorst concluded.
previous post

[EWB Interview] Abazović: The change of government in Montenegro is an example for the entire region, the government is committed to EU membership