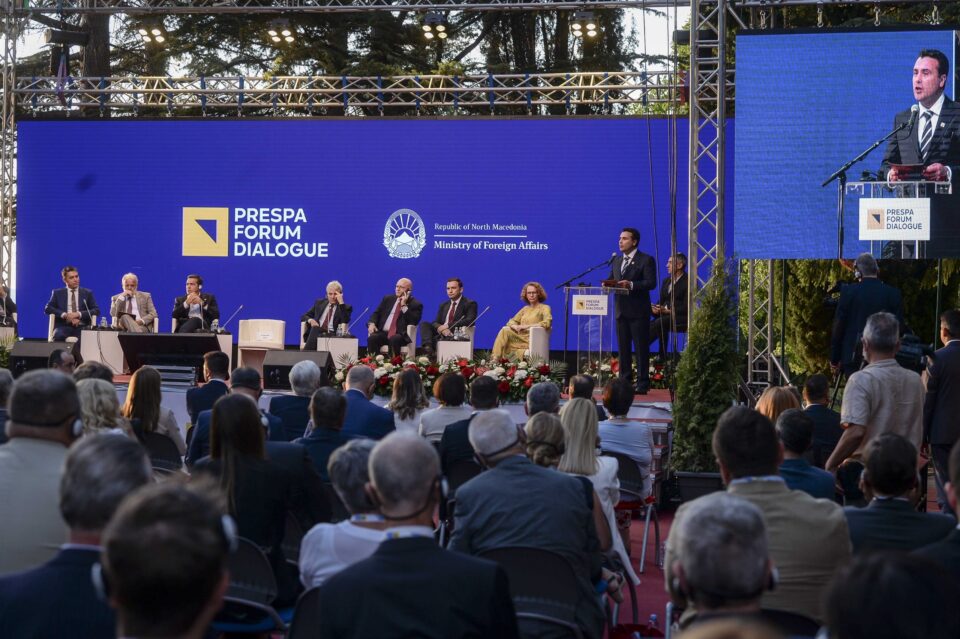 The inaugural Prespa Forum Dialogue, held on 1 and 2 July 2021 in North Macedonia, marked the three years since one of the most significant breakthroughs in the Western Balkans during the last decade, the Skopje-Athens agreement on resolving the name dispute. Most of the participants of the process leading to the agreement, including former Enlargement Commissioner Johannes Hahn and former Greek Prime Minister Alexis Tsipras were present, alongside the Western Balkan Presidents, Prime Ministers and Foreign Ministers.

If one had told the leaders back then that three years later North Macedonia would enter NATO but it would only manage to get a formal opening of the accession talks with the EU, without even a Negotiating Framework being approved, it would have probably been hard to believe. This is, however, exactly what happened, and the disappointment was palpable.

On the first day of the Forum,  Deputy Prime Minister of North Macedonia Nikola Dimitrov said that this was a great timing for this topic and the gathering, referring to the anniversary of the Prespa Agreement.

“However, we have to be honest and open – it is the worst time possible. For the second time, Bulgaria vetoed the accession talks with North Macedonia and Albania. It has been two decades since we started the talks with the EU. We do not know whether to expect it anymore”, Dimitrov said.

During the second half of June it became obvious that Bulgaria will again withhold its support for the adoption of Negotiating Framework for North Macedonia because of the dispute over the common history and language. The position of Sofia went against the EU institutions and all other Member States, even the enlargement-skeptical France and the Netherlands, who this time supported taking Albania and North Macedonia one step further.

“If the EU cannot make a difference in the region, which is not even its backyard, but its courtyard, it is telling about the problem the EU faces. The long-term consequence will be the weakening of those who believe in the transformative process of the enlargement and in European values”, Dimitrov said.

Prime Minister Zoran Zaev was equally direct in his remarks on the second day of the Forum.

“EU’s decision not to schedule the first IGC was a great disappointment both for North Macedonia and Albania as well. It was a huge failure of the EU enlargement policy and a very bad message for the whole region. EU failed to keep its promise”, Zaev said.

Simonida Kacarska, Director of the European Policy Institute from Skopje, assessed for European Western Balkans ahead of the Prespa Forum that the most serious consequences of the EU’s inability to start the negotiations with North Macedonia and Albania are the weakened credibility of the Union in the region as well as globally as a foreign policy actor.

“In effect, the inability to start the accession negotiations and to overall adopt any conclusions on enlargement go against the declared vision of the current (not so new anymore) European Commission to act in a geopolitical manner”, Kacarska said.

One of the factors that contributed to this delay was the fact that Bulgaria itself is in a political vacuum, with the inconclusive elections on 4 April and a caretaker government appointed ahead of the new vote on 11 July. Kacarska believes that this situation made it even more difficult to achieve a breakthrough despite the fact that even the United States voiced its support for the opening of accession talks.

“In June, it was rather difficult for EU and US partners to put pressure on a ‘technical/caretaker government’, but the partners should also not wait for the new government to be formed in order to facilitate discussions on this issue. If their support is sincere, the work with all Bulgarian stakeholders needs to start immediately so as to de-escalate the issue politically as much as possible to create fertile conditions for solution in the short term, by the end of the year”, Kacarska concludes.

Albania remains a “hostage” to the bilateral dispute

Even though North Macedonia has been deemed ready to start the accession talks for more than a decade, Albania caught up several years ago, at least according to the assessments of the European Commission, which has recommended opening accession talks with both countries since 2018. However, due to the decision of the EU not to decouple them, Tirana will have to wait for Sofia and Skopje to solve their dispute.

Taking the stage after Zaev during the second day’s panel discussion, Prime Minister of Albania Edi Rama expressed his view on the subject in a more unofficial tone.

“To be very frank with you, I’m not feeling it (the frustration) anymore at all. And I’m serious about it. I am not at all waiting for it and I don’t feel what I used to feel before when it come. You can organize a beautiful wedding once, and the bride at the end does not show up. You then do it the second time by engaging in setting wonderful scenery with greatest music, food, decoration, guests, and the bride does not show again. And then you just say the f-word and you do not organize a wedding anymore. And if the bride comes, let it be casual”, Rama said, sparking the laughter of some of the guests.

He said that the region should continue with its own economic integration, highlighting the mini-Schengen initiative he launched with Zaev and Serbia’s President Aleksandar Vučić, as well as internal reforms.

“Of course we need to keep going, by making the improvements, by fulfilling the standards every year, but it doesn’t depend on us”, Rama said.

Blerjana Bino, Co-Founder of Center Science and Innovation for Development, commented before the Forum that, for some time now, Prime Minister Rama’s discourse around the European integration process focuses on blaming the EU for its inability to deliver on its promise.

“In early April 2021 before the general elections, he stated that the veto of Bulgaria for North Macedonia will have repercussions for Albania as well in the enlargement process. In a sense, this narrative reinforced by the media as well, prepared the ground for the expected failure to decide on the IGC. So, the general narrative is that the EU failed to deliver and not that Albania failed to comply”, Bino told EWB.

She reminded that Albania had undergone very complex reforms such as the justice reform among others and North Macedonia have made fundamental compromises with Greece regarding its name, constitution, and identity

“It seems like there is no vindication for such actions now that the EU seems to shut the door, yet another time. This is leading to disappointment, frustration with the process and the EU itself which can fuel further populist discourses and scepticism of European integration. In long term, this impasse of the EU towards the integration of WB countries might risk the political stability of the entire region as it hangs, to a large degree, on the prospects of EU membership”, she said.

She also pointed out at the potential for further increase of influence of third actors – China, Russia, Turkey and Arab States – grows with this act.

“The investments by these actors are in a sense even more attractive for Governments at this moment as they do not come with strings attached such as requirements for rule of law, transparency, accountability, human rights and fight against corruption and organized crime (as do the EU investments and funding). This in turn might risk strengthening tendencies of autocratic governments with broad concentration of power”, Bino warned.

Prime Minister of Serbia Ana Brnabić, who spoke after Rama, agreed with his main points

“We are not frustrated and depressed, we are beyond that. For a time, you are depressed and frustrated, and then you do not expect anything anymore, and you are liberalized. And that is, I think, how we all feel and that is a great feeling which we wouldn’t have without the EU, and that is a great feeling so thank you very much for that… It’s no longer about the European values, it’s no longer about progress in the key area, and that’s the rule of law. It’s now about bilateral issues”, Brnabić said.

Unlike Albania and North Macedonia, Serbia held an Inter-Governmental Conference on 22 June, but it did not open any new negotiating chapters. While the assessments of the experts disputed the Government’s narrative that the situation in the rule of law had changed significantly in the past months, the EU was still not clear about what is expected of Serbia, and the failure to deliver to Skopje and Tirana could only make the message murkier.

Criticism of EU from United States as well

The panel discussion that gathered Prime Ministers of the region was marked by the assessments of disappointment and growing indifference with the EU, but its offial title was“Resetting the EU-US Synergy towards the Western Balkans”.

“I would like to finish by using President Joe Biden’s words – America is back. I would add to that – Western Balkans is back and European Union should be back, so that we can all move forward”, Prime Minister Zaev concluded in his speech.

Since the election of Biden administration, the United States has shown more activity in the region, including on the accession talks with Albania and North Macedonia. Following the open support to the start of the accession talks in June, Americans shared their disappointment with the regional leaders during the Prespa Forum.

“The blockade on accession talks with North Macedonia undermines Europe’s credibility and highlights the impression that the EU is leaving the region behind,” Acting Assistant Secretary of State Philip Reeker stated in a press conference with Zoran Zaev on 2 July, saying that Skopje has a “friend like no other” in the US.

During the first day’s panel with Deputy PM Dimitrov, Professor at the Johns Hopkins Institute Edward P. Joseph said that the US never wanted to be ahead of the EU in the Balkans.

“The EU cannot be the world leader without taking the Balkans seriously. And the EU is not being taken seriously. I am saying this with sadness as an American, because the EU is our ally”, he said.

According to him, to fail to honor what North Macedonia has done is a historic mistake. When it does it for a second time, he said, that is a betrayal.

“If the EU aspires for strategic autonomy from the US, it needs to solve the issue of Balkans first”, Joseph underlined.

It remains to be seen will the EU will be able to solve the issue or the United States will have to step in. The efforts of both actors have proved to be insufficient thus far.

Schütz: The Berlin Process will continue to play an important role for the Western Balkan