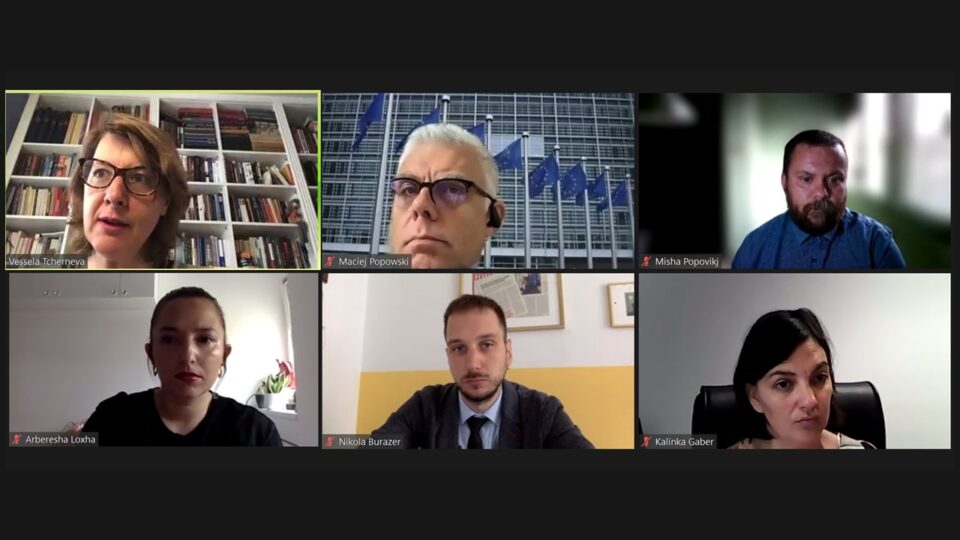 BERLIN – Inconsistent EU conditionality in the Western Balkans, where the achievements are not rewarded and problems not tackled, is creating problems for the Union, and this needs to change, highlighted the opening event of the Civil Society and Think Tank Forum II.

The Forum, taking place online on the same day as the Berlin Process Summit, is organised by Aspen Institute Germany and Southeast Europe Association. The opening of the Forum featured a video message by German Chancellor Angela Merkel who said that she saw the future of the Western Balkans in the EU, and that both sides should work on this goal.

The first panel discussion, moderated by Vessela Tcherneva, Head of Sofia Office of the European Council on Foreign Relations, dealed with the topics of conditionality, reform Agenda, and the future of the EU in the Western Balkans.

Kalinka Gaber, State Secretary for European Affairs at the Government of North Macedonia, warned about the negative effects of the inability of the country to move forward despite fulfilling all conditions.

“Never before has the support for the EU in North Macedonia declined below 75%. It is now at a record-low 59%. This is a result of unclear strategy of the EU to the country and the region as a whole”, Gaber said.

Reacting to the comment by Maciej Popowski, Acting Director-General for Neighbourhood and Enlargement Negotiations at the European Commission , that the EU needs good stories from the Western Balkans, Gaber said that North Macedonia is a positive story from the region, managing to turn around the trend of a democratic decline.

“In this case, not letting it move forward is disappointing”, adding that the Western Balkans is the most obvious place for the eu to start exercising its role of a strategically important actor.

Acting Director Popowski touched upon the Bulgaria-North Macedonia dispute, saying that it shows the downsides of making an enlargement process more political, which was one of the aims of the new methodology.

He said that the discussion between the EU Ministers on North Macedonia and Albania last month was an emotional one, which is not necessarily the bad thing, because it shows that they are engaged in the process. As for the European Commission, it will continue to cooperate with the civil society and use its inputs in drafting Reports on the Western Balkans.

Arberesha Loxha, Executive Director of the Group for Legal and Political Studies and a representative of the Think for Europe Network (TEN) also stressed that the EU should work on changing the strategy, which should become reliable, transparent and based on a visible set of rules.

Loxha stressed that the visa liberalisation of Kosovo has become almost a cliché by this point, due to the long inability of EU to agree on this issue.

She said that her Network proposed a very strong conditionality policy which would ban cooperation with the leaders which are clearly autocrats and promote illiberal values in the Western Balkans.

She added that the EU needed to focus more on economic prospects as a matter of priority, since an important incentive for democratisation is economic development and Western Balkan Six lack growth strategies.

Misha Popovikj, Good Governance Program Coordinator at the Institute for Democracy Societas Civilis from Skopje, pointed out that the EU needed to trust the civil society in the Western Balkans more, with more institutional financing needed, rather than the current model of project financing.

He also said that the enabling environment for the CSOs depends on values.

“EU usually lags a bit when they engage with their peers in the WB after civil society faces hostility”, Popovikj said.

He focused on the role of civil society in fostering trust in the institutions in the Western Balkans, which is at a low level and creates space for populism and corruption.

Nikola Burazer, Programme Director of the Belgrade-based Center for Contemporary Politics, presented the recommendations for tackling the problems of media freedom in the region by the EU.

“There are media outlets across the region that serve to share propaganda, that is a big issue. Transparency of funding and ownership is important”, he said, highlighting this problem in Serbia, where, he said, there are serious allegations of misuse of public money to concentrate the ownership of the media in the hands of the people close to the ruling party.

According to him, the EU should further develop instruments, such as specialised reports, that would tackle the root causes of the problems of the media in the region. It should also continue to support the independent media, especially investigative outlets, as well as media literacy programs.