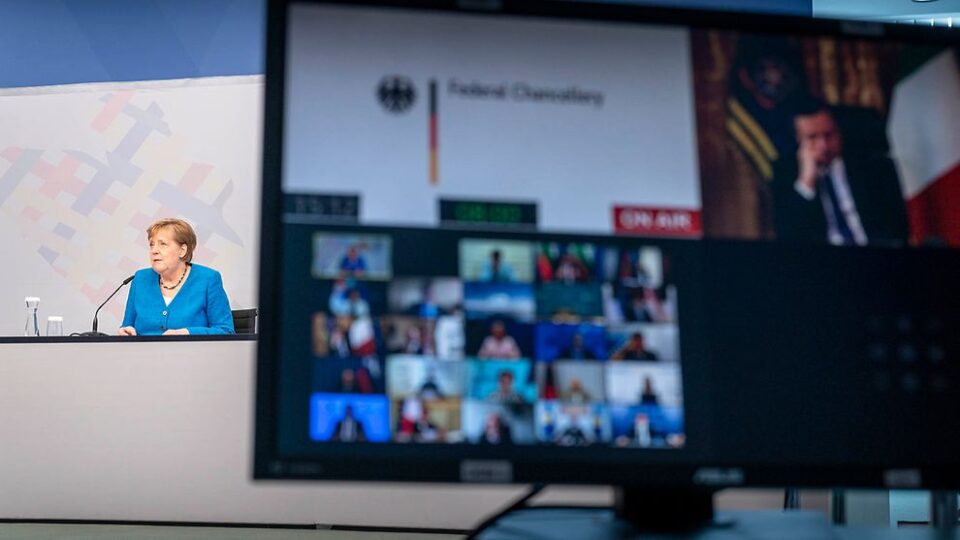 BERLIN – Online Summit of Western Balkan Prime Ministers and the EU leaders, hosted by German Chancellor Angela Merkel, took place on Monday, with the participants taking stock of the results of regional cooperation and outlining the future steps.

The Berlin Process is an initiative aimed at stepping up regional cooperation in the Western Balkans and aiding the integration of these countries into the EU, launched in 2014, by the German Chancellor Angela Merkel. Alongside the annual meetings of the highest governmental officials, the Berlin Process encompasses the meetings of the representatives of regional civil society organisations (Civil Society Forum of the Western Balkan Summit Series), youth organisations (Youth Forum) and business associations (Business Forum). Civil Society Forum took place eralier during the day.

Merkel puts emphasis on the “practical successes” of the Process

German Chancellor Angela Merkel, in her final appearance at a Berlin Process Summit in her role as a head of government , assessed that, beyond all the difficulties that still exist, also in connection with overcoming the war past, there have been a number of practical successes in recent years, but also in the last twelve months.

She mentioned the Regional Roaming Agreement, which entered into force on 1 July, Green Lanes established last year, as well as the Regional Youth Cooperation Office and steps towards the Common Regional Market.

“This process makes it clear that in addition to the process of rapprochement with the European Union with the aim of membership in the European Union, it is above all important that the region works together in a phase in which each individual country is still working on its path to accession”, Merkel said in a press conference following the meeting.

She acknowledged that there are still a number of difficulties to overcome, such as the dialogue between Serbia and Kosovo and the situation in Bosnia and Herzegovina. Merkel said that Christian Schmidt, as the future High Representative for Bosnia and Herzegovina, had already taken part in the Conference.

“Unfortunately, we still have a number of discussions between Bulgaria and North Macedonia in order to hold the accession conference. We need a lot of patience and a lot of commitment. That was presented today by all those involved”, Merkel said.

She confirmed that the Slovenian Council Presidency will organise an EU-Western Balkans Summit, which will then with the accession processes.

“We hope that by 6 October we may still be able to reach some outstanding practical arrangements with a view to the common market of the Western Balkans”, Merkel said.

According to Conclusions of the Summit released yesterday evening, the participants stressed the need for the continuation of the Berlin Process in order to harness the full potential of improved regional cooperation, also with a view to overcoming the socio-economic consequences of the COVID-19 pandemic.

Participants emphasised that EU enlargement for the countries of the Western Balkans constitutes a strategic investment in peace, democracy, prosperity, security and stability in Europe, reconfirming the longstanding view that the future of the entire region lies within the EU.

It is now the task of the Western Balkan countries to conclude without delay the work undertaken and facilitated by the Regional Cooperation Council (RCC) and under the Central European Free Trade Agreement (CEFTA) and to swiftly sign or adopt the relevant agreements and decisions for the benefit of citizens and companies in the region, the document reads.

Participants welcomed the announcement by Montenegro that the next Western Balkans Digital Summit, a flagship event of the regional economic integration agenda, will be held on 11-13 October 2021.

Participants commended EU solidarity with the Western Balkans in fighting the pandemic, demonstrated by, as the Conclusions stresses, the unmatched EU support for the region, including vaccine deliveries through the EU Vaccine Sharing Mechanism.

Regarding the Civil Society and Think Tank Forum 202, participants welcomed the recommendations elaborated by the Forum’s ten working groups, with specific regard to the stronger inclusion of citizens in EU enlargement processes, the importance of reconciliation and free and independent media, the focus on the environment and energy transition, and the full integration of Roma and minorities.

European Commission: Economic integration of the region important for the planned investments

President of the Commission, Ursula von der Leyen, and Commissioner for Neighbourhood and Enlargement, Olivér Várhelyi, participated in the Summit as well.

According to the press release, the Commission reconfirmed its commitment to cooperation with and support for the region in its post-pandemic recovery through the Economic and Investment Plan, focusing on green and digital transition investments, smart mobility links, sustainable energy, digital infrastructure, and business sector development and human capital, including youth. The Commission also called for further progress in the region’s economic integration to reap the full benefits of the planned investments.

President von der Leyen, said in her opening address that the first priority of the Commission is to accelerate the enlargement agenda across the region and support Western Balkan partners in their work to deliver on the necessary reforms to advance on their European path.

Reflecting on the common future of the EU and the Western Balkans at the #BerlinProcess Summit.

We need to speed up the enlargement process.

And in parallel, bring the Western Balkans on our path to becoming more sustainable, digital and resilient. pic.twitter.com/Jo2zk8f4cX

“But our engagement with the Western Balkans goes beyond that, and the Berlin Process has served as an incubator for many initiatives that have now become an integral part of the EU’s policy vis-à-vis the region. Together we have set the course for a more sustainable, more digital and more resilient Europe”, von der Leyen said.

Commissioner Várhelyi emphasised that closing the socio-economic gap between the Western Balkans and the EU is crucial for the Enlargement process.

“We are bringing significant investment opportunities to the region through the Economic and Investment Plan. Now it is for the region to use them well by harnessing its full economic potential and establishing a Common Regional Market based on EU rules. Creating ‘Green Lanes’ on the border crossings within the entire region first, and now piloting this with an EU Member State is a perfect illustration of how this can work”,Várhelyi said.

Kurti reiterates call for re-organising free trade in the region

Speaking at the Summit, Prime Minister of Kosovo Albin Kurti said that his country is “fully committed to regional cooperation…,” but nonetheless, Kurti didn’t support the idea of the mini Schengen that Albania’s PM, Edi Rama has been promoting for quite some time now, Euronews Albania reports.

According to Kurti, the solution would be an Agreement of Free Trade for Southeastern Europe, based on the EFTA-EEA model, that would “elevate the whole region and overcome current obstacles.”

“We certainly hope that the European Commission can seriously consider this proposal and start a dialogue that would lead to concrete results,” said PM Kurti.

Thanks to the support of Germany and Chancellor Merkel, but also to the internal initiatives of the representatives of Serbia, Albania and Northern Macedonia, the Prime Minister explained, the implementation of the Action Plan will enable further expansion of economic and trade cooperation in the region, which will make it more attractive for foreign investors, Serbian Government’s press release reads.

She concluded that support in the region was particularly visible through solidarity with neighbors during the pandemic and assistance with vaccines and medical equipment.On the other hand, we, the leaders of the countries in the region, stressed that EU enlargement is a strategic goal for the countries of the Western Balkans.

Prime Minister of North Macedonia Zoran Zaev stated that, undoubtedly, the full integration of the Western Balkans into the European family should be a natural outcome of the region’s reform path and a pillar of long-term peace and stability.

“I can say that the Berlin Process really managed to move the Western Balkans in the right direction. Especially in relation to regional economic cooperation. In this context, looking back, when two years ago we decided to reduce roaming prices in the region, no one thought we would have a region with zero roaming fees. This historic success came as a result of lengthy negotiations facilitated by the Regional Cooperation Council and the European Union. Now that’s done”, Zaev said.