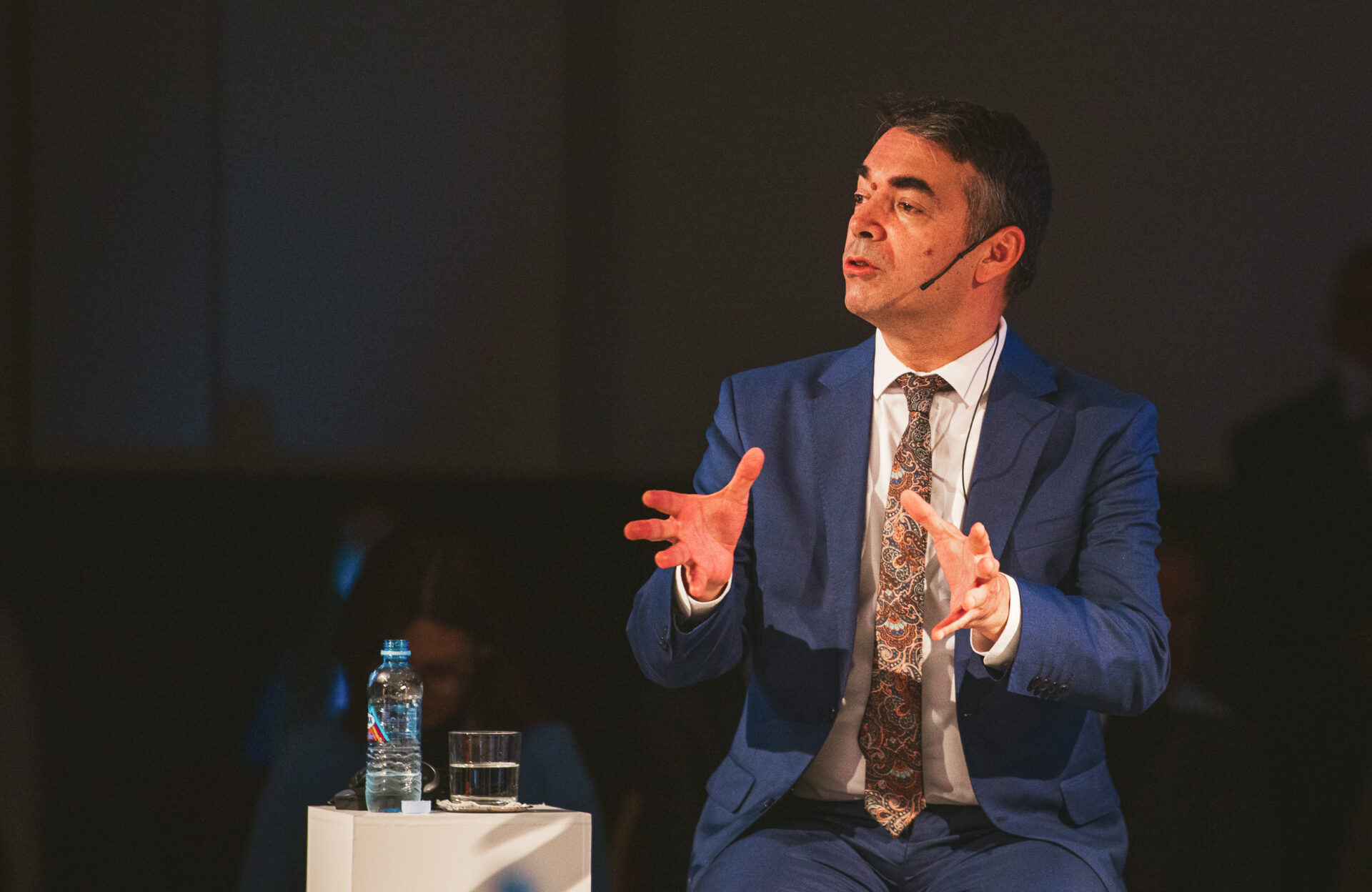 One of the most important questions for North Macedonia, following the repeated delays of its EU accession process, is how it will proceed – both with the internal reforms and with trying to find a solution of the dispute with Bulgaria. Disappointment of Macedonian officials at this year’s inaugural Prespa Forum Dialogue (1-2 July) was palpable – what comes next? We asked Deputy Prime Minister for European Integration Nikola Dimitrov on the sidelines of the Forum.

European Western Balkans: During the panel discussion on the first day of the Forum, you were very frank, you said that there is a huge risk that the citizens of North Macedonia will lose trust in the EU accession process. How is this loss of trust affecting the implementation of necessary reforms? Is it possible to implement reforms when people lose trust in the accession process?

Nikola Dimitrov: This is a very important question. In many ways, as we all know, we do the reforms for the people. The way to enable a European way of life at home is through reforms. And this is the only sustainable alternative to the brain drain and young people leaving the region. We either make this region European – in terms of education, health, equal opportunities, more merit in terms of finding a job, getting a promotion, more justice, more accountability, more freedom, or people think leaving their home country and moving to an EU Member State is more attractive. So, this is the hope.

At the same time, the big incentive of course is full membership. So, in many ways, I do not think that the region has many alternatives but to become a European region in terms of standards at home. On the other hand, the accession process, if used properly, supported by political will to change and transform is the best reform tool available.

So, it will be a challenge to keep the motivation of leaders, of experts, of state administration. But, I think, while that the Member States like Bulgaria in our case, can veto accession, it cannot veto reforms. I think we have to persist on that.

Our Government, this week, on Tuesday, adopted a big revision of the National Program for the Adoption of the Acquis, which is the biggest strategic document we have when it comes to the Europeanisation, it is 800-900 pages, it sets the goal, the dynamic, the resources, in terms of bringing more European acquis and standards in our legal system. So, we have to pursue that, I think. We have responsibility to make sure that, when the European Union is mentioned, it is not only the problems that come to people’s minds, it is also positive changes.

EWB: When you mention the Government’s adoption of the reform programs, let’s be optimistic and say that the dispute with Bulgaria is resolved soon, how long do you think it will take for North Macedonia to actually fulfill all the formal criteria for becoming an EU Member State?

ND: It is always risky to give precise estimates when it comes to this process. I think that, with a high level of ambition, big political focus and capable administration, this is doable in few years. The other part of that equation is whether the European Union is ready. As we all know, some countries think that internal reforms of the Union should take place in parallel. And in part, this whole Conference on the Future of Europe has to do with that ambition – for the EU to change from within. But these two processes should meet at some point – the process of Europeanisation of the Balkans and the process of internal reforms of the Union. If we both assume our responsibility, the region, the Member States and the institutions in Brussels, I think this is doable.

ND: I hope it will. It is a democratic exercise. The inclusion of as many Europeans as possible in these discussions is definitely a good thing. I don’t think it would be easy to politically translate this big platform into concrete steps. We will see how will that go.

I think that the region should be more included in this Conference because it is not about EU only, it is about Europe. We are definitely Europe. And if Europe is serious about the European perspective that is repeatedly said in so many documents since the big promise in Thessaloniki in 2003 then our region should definitely be a part of this debate. Because we are approaching a moving target – the EU that is changing itself.

EWB: President of Slovenia Borut Pahor said today (2 July) that Slovenian Presidency, the Government, and him personally as President would make efforts to convince Bulgaria to lift the veto on North Macedonia and Albania. Do you think that this Presidency will be successful in this effort? Can they built upon what the Portuguese Presidency did in their mediation efforts?

ND: We’ve had now two presidencies in a row trying to resolve this problem and essentially to deliver to the region – the German Presidency and the Portuguese Presidency. I don’t think that Slovenian Presidency will start from scratch, I think we have good ideas in the form of the Portuguese proposal. We also had intensive discussions bilaterally with Sofia to come up with a roadmap that is an element in this whole package.

I think if there is good will, if there is recognition that the status quo, the impasse is damaging – the latest polls show that it has a very negative impact on the views of Macedonian citizens towards Bulgaria. Over 40% see it as a big problem, there will be animosity, and I think that this is a lose-lose dynamic. So, with political will and leadership, I think we can find an European solution that would be good for Macedonian-Bulgarian friendship, so it will be good for the European promise for the region, for North Macedonia and Albania definitely.

But there is an “if”, because we did a lot, we’ve worked hard, we can’t really negotiate on who we are and what language do we speak.

One of the core values of the EU is cultural and linguistic diversity of the continent. It’s about the dignity of our people. It’s about the right to self-determination. So, questioning the language is definitely not an investment in good neighbourly relations.

EWB: We saw that even the United States voiced its support for starting the accession talks with North Macedonia and Albania, and even that was not enough for them to start last month. Do you think that the United States has done enough to convince Bulgaria to lift the veto? Do you expect more help of the United States on this front in the future?

ND: I think the stakes are high. We welcome the engagement of the United States in the region, also on this particular issue, to help us with our European future. In that vision, Europe whole and free, stable and prosperous, I think we share the geopolitical interest. Rationally looking, Bulgaria is also a part of this. Under normal circumstances, our neighbours should be our biggest champions. And this sense of togetherness that is gradually spreading in the region, we need to maintain and build upon.

Prespa Agreement was praised by the whole democratic world. From being “a model for the region” to “a big European success” to “a triumph of diplomacy”, I am using the quotes from European leaders. In order to make sense, these big words should be supported with action, where European promises will also be met. Because going through this cycle of hope and disappointment is risky and not helpful.

I think we all have a stake – we have a stake, region, Bulgaria, Europe, we have this keen interest of the United States, we either have a “win-win-win” or we are going to have a “lose-lose-lose”. So, let us see what the next Bulgarian Government deicides to do in this context.