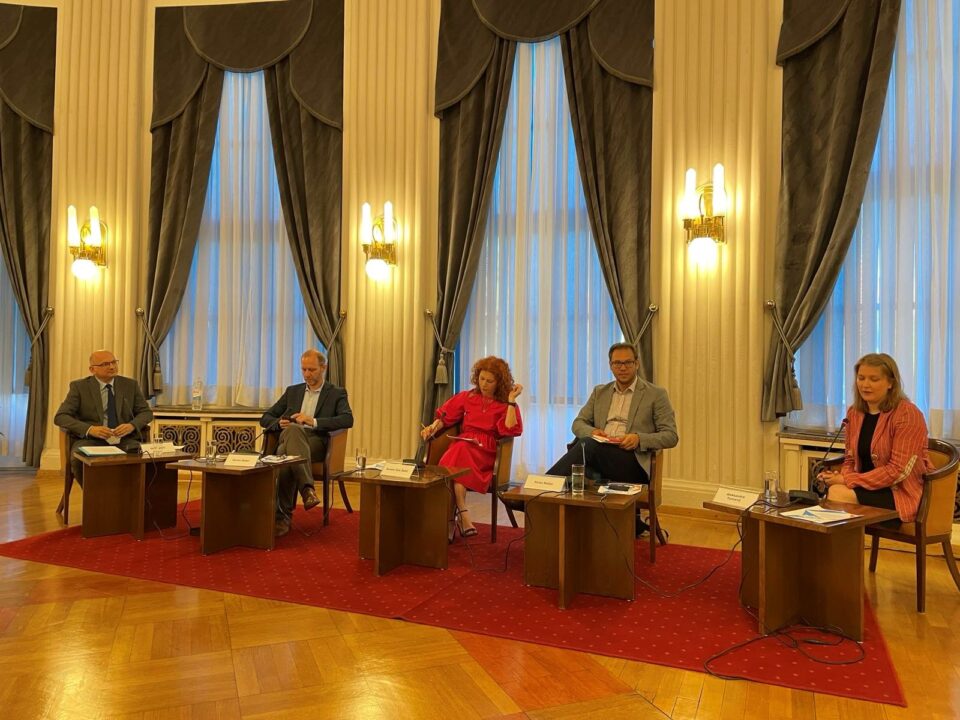 ZAGREB – To bring the enlargement policy back on track, it is necessary to ensure the trust of the Western Balkan citizens in the accession process, it is concluded at the presentation of the latest policy brief “Bouncing back: Completing the EU unification process” of Balkans in Europe Policy Advisory Group (BiEPAG).

Since the lack of concrete progress and clear recognition of progress made is beginning to have an effect not only on political elites but also on the WB citizens the main topic of the event was to discuss what is the way forward and what needs to be done when it comes to the EU integration process of the region.

Aleksandra Tomanić, Executive Director of the European Fund for the Balkans during the opening remarks explained the current situation of enlargement policy, which was the reason for drafting the policy brief.

“The enlargement policy is currently in a deep crisis. After the European Union’s attempt to turn the process into more technical one, while the political situation on the ground was deteriorating and the entire non-governmental sector has demanded a more realistic picture, progress has not been made. Actually, the progress has even been dropped from the titles of progress reports, since now we have country reports”, she said.

Tomanić added that still, the enlargement policy did not die, that no one wants that to happen and that that is the reason why the policy brief has been made – to enable Western Balkan countries and EU to gently move forward with the European integration process.

Zoran Nechev, Member of BiEPAG and Senior Researcher and Head of the Center for EU Integration of the Institute for Democracy ‘Societas Civilis’ presented the main idea of a policy brief.

As he explained their aim was to bring back transformation power to the accession process by showing a real situation in each of the 6 Western Balkan in the conditions of falling enthusiasm among the people of the region.

“This is not just about political elites who are not interested in the process, but also about the rest of the citizens. The public opinion research shows that more and more citizens do not believe in their European future – that is why we are proposing ways to change that, to get the process back on track”, he said.

Nechev further presented recommendations for that to happen such as including candidate countries in the instruments that the EU already has developed for member states to see where they really stand, strengthening the capacity of both EU and WB countries so that their absorption into EU is possible, as well as establishing clear deadlines.

“The accession process is a story that must have a beginning and an end. The process cannot last 20 years, in that case no one believes in it. We need to know when it starts and when it ends, and we are not talking about “We need a date”, but about what the previous candidate countries had – clear deadlines for reforms. When that exists, the whole story becomes more alive”, he said.

Florian Bieber, BiEPAG Coordinator, Professor of Southeast European History and Politics and Director of the Centre for Southeast European Studies at the University of Graz, explained that the Enlargement policy needs new approach since the existing are not adequate and can destroy the process.

He presented four current approaches – a bureaucratic one that highlights existing accession mechanisms that are sufficient, an approach of support to the enlargement by member states which destroy Union values ​​from within, an approach that proposes economic integration that he believes is not good because it does not emphasize democracy as a condition and the one which blames the governments of candidate countries for the stagnation.

“Our study is an attempt to create the fifth approach to continue the process that is currently not working. For that It is necessary to establish political will – the fact that the number of people in the region who believe that their country will become a member is declining is dangerous because if their trust is lost, governments have no reason to make progress”, he said adding that it is crucial to bring back the trust of the citizens because they would then put pressure on government officials to continue the process.

Senada Šelo Šabić, Co-founder of the Foreign Policy Forum and Senior Research Fellow at Institute for Development and International Relations, pointed out that the crisis in EU enlargement policy happened because neither the EU nor WB countries have taken realistic steps of progress in the process.

According to her, initiation should still come from candidate countries where the main problem is the lack of a substantive membership debate.

“Neither the citizens nor the leaders of these countries ask the essential question – “Where do we want to belong and if we want to belong there, why?”, she pointed out adding that such a debate did not happen in Croatia as well and because of that membership expectations have not been met.

Šelo Šabic explained that the EU is making a mistake because of cooperation with government officials while its reports showing that they are the ones who do not respect EU values ​​and do not want reforms to be implemented because they want societies where the judiciary does not function and they are untouchable.