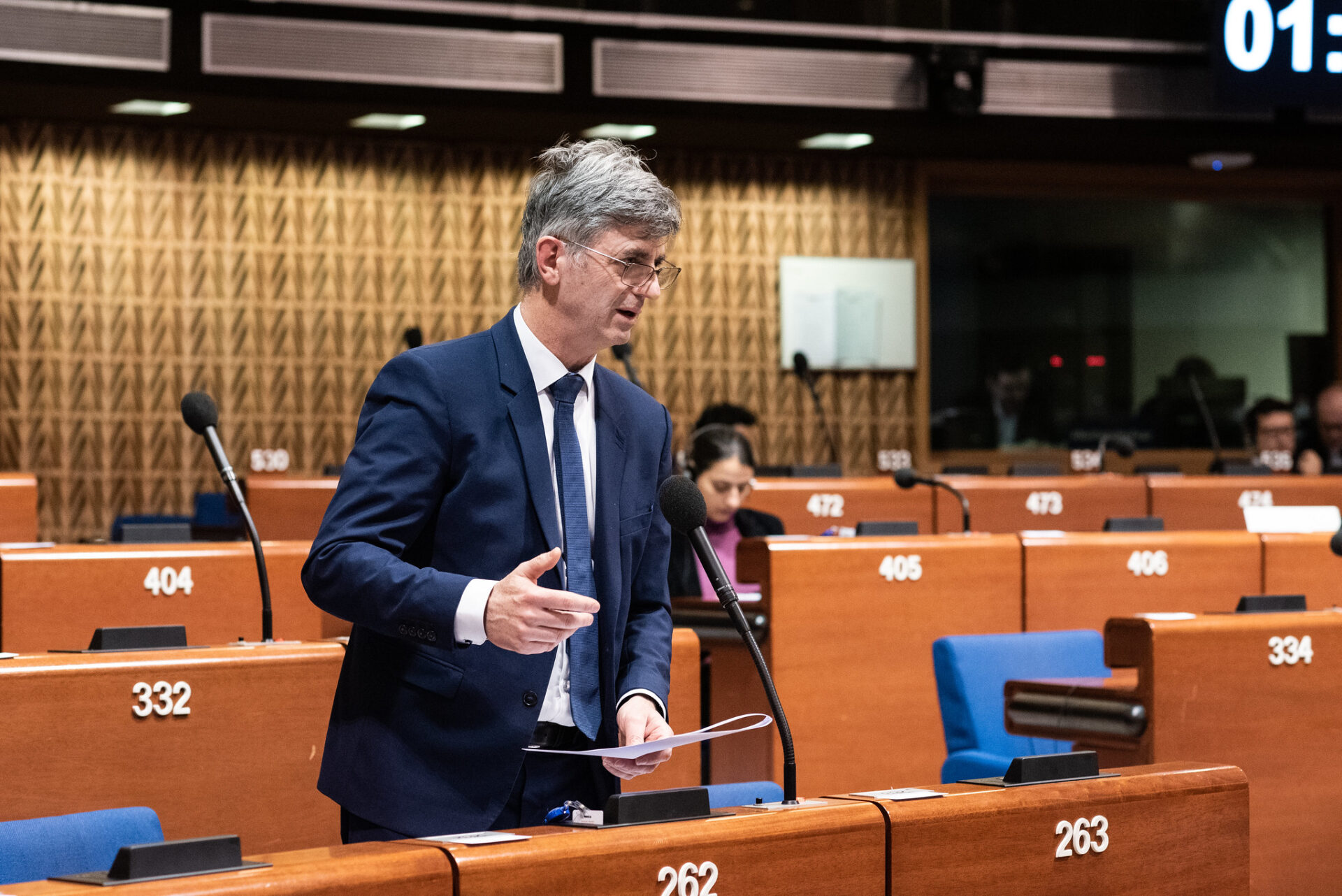 Being a member of the National Assembly of France for the ruling La République En Marche and a vice-president of the Foreign Affairs Committee, Jacques Maire is the right person for the questions on the current French position on enlargement, relations with the Western Balkan countries, and the reforms France believes EU needs to undertake before it accepts new members.

We discussed these and other topics with Mr Maire, who is also the Chairperson of the Alliance of Liberals and Democrats for Europe at the Parliamentary Assembly of the Council of Europe, on the sidelines of the inaugural Prespa Forum Dialogue, held in North Macedonia on 1 and 2 July.

European Western Balkans: During the panel on the Conference on the Future of Europe, you said that the Conference was a risk, but a risk worth taking. Can you elaborate on this statement a bit?

Jacques Maire: Yes, of course. It is a risk because we had some failures in the past related to this kind of initiative. I remind you of the Convention on Europe in 2005, where there was a failure at the level of the referendum. And the reason for this risk was that there was a discrepancy between the expectation of people and also the engagement of some of the opponents in some of the countries compared to what was the delivery of the Conference. So, the idea now is really to focus on people, on the expectations of the Europeans, in order to be sure that what we address can be understandable and achievable.

EWB: And are you optimistic that the Conference, which is scheduled to conclude next year, will actually have a significant impact on European politics?

JM: We cannot be sure because it is really just starting. What is sure is that there are already, I would say, different camps which are in conflict with each other. We don’t want it to be a confrontation between states. We want it to be supported by citizens. And as an example, there are some countries that say that they do not want to change the Treaties because it would be too complex. There is a lot of speech coming from the Prime Minister of Hungary, that he wants to bring down the European Court, suppress the European Parliament, but what we want to achieve in France is to have better capacities to act on topics which are important for the people, such as management of health pandemics, climate change, rule of law, there are many topics where Europe is expected and has to deliver more.

EWB: The position of President Macron is that the EU should reform itself first and then accept new members, this is a well-known position from a few years ago. But, since then, we haven’t heard anything specific about these reforms, when are they going to take place, what are they going to entail, and so on. So, do you think that the Conference on the Future of Europe will help formulate what kind of reforms are we going to expect and when, or are these separate issues?

JM: First, what is important is that President Macron is very much supporting the start of negotiations with North Macedonia and Albania as soon as we can, and it is something that we would like to see starting before the start of the Presidency (January 2022).

Secondly, of course, the idea of this Conference is to help Europe tackle those challenges. And it is true that for the moment, there is the risk of Balkanisation, and you see people wanting to benefit from Europe in terms of access to markets, subsidies, etc, but they do not want to share the discipline and the values, and this has to be solved.

So, when it comes to relations with the candidate countries in the Western Balkans, it is true that what is important for them is to position themselves on what they expect and how would they want to be in Europe. An example is a regional integration, which is starting and which is good, with the Green corridors during the pandemic, with roaming, with more security and border controls, which is good. But one of the lessons of the past twenty years is that Europe is not going in the same direction as everybody. For example, we’ve got the European currency, the Euro, which is not used in all countries, we’ve got the Schengen agreement which does not include all Europeans, the reinforced cooperation in international policy, and in this case, the expectation from the Western Balkans is what it wants to propose as solutions, how it wants the stability of the region to be integrated in Europe’s vision. It is something quite substantial to achieve.

EWB: Do you think that any of these proposals will be implemented in the near future? Is there political will in the European Union for the reforms proposed either by the Western Balkans or, for example, France?

JM: First, as I mentioned earlier, there are already some disagreements about the ways to achieve it and when some countries say “we don’t want to change the Treaties”, it makes things difficult, but it does not mean that they do not want the EU to converge. They want to converge, they want a more efficient Europe, but they do not want to change the Treaties. We can understand that.

When some others say “we do not share the same project, we want to make the Union weaker and the nations stronger”, this is a completely different set of positions. We think that we can have strong countries with a strong Europe and that this is not at all incompatible. So, at the end of the day, it is true that is very likely that the process will take some time.

EWB: You were also mentioning opposition in French public opinion to the further enlargement of the European Union, this is of course not only the case in France but also in other Member States. So, do you think that this public opinion is the crucial reason why the enlargement has stalled in recent years?

JM: I would say it is a side-effect. People think that EU has been advantageous, nobody wants to renounce it, even Marine Le Pen in our country gave up the idea of “Frexit”, she wants to remain in the Eurozone, so people think that there is a lot to lose. What is true is that enlargement is a difficult topic at the moment, it causes fragmentation in Europe and, in particular when it is attached to the rule of law.

People think that the way enlargement has been managed is not successful as such.

It is true that there is a request not to repeat the same flaws of the process and to ensure that there is convergence. The burden is heavy to manage Europe, to make it lively, crisis management is on the agenda every day, and enlargement – I prefer the word “unification” – is something which comes on top of it.

And so, what is very important for us, is that if we propose to go for enlargement, we are able to challenge those who are more on the “nationalist way”. And in France, it is true that enlargement has been utilized since Sarkazy in fact, to make people afraid. What the difference is that Emmanuel Macron has raised the blue flag with stars very high, he said “I want Europe to be active, I am a European” and he was also very demanding about the new process of negotiations. So he assumes, the majority of France assumes now clearly, that there is a way, there is a path, there is a process to converge. And that was not the case five years ago.

EWB: Do you think that the new enlargement methodology, which was actually initiated by President Macron, will help this convergence?

JM: It’s a bet, it also depends on the governments and the public opinion in the Western Balkans. What is most important to me, just to put it clearly, what the new methodology is about – it is about de-bureaucratization, it is about more politics, more impact. And what we feel is that when you negotiate about the acquis, which is about putting the legislation of the EU in your own laws, with no concrete results, you lack momentum.

So what we want to achieve is that if some country wants to speed up in the negotiation process, then we can close some policies and we can implement these policies.

For example, agriculture – if we close that file, that means that the citizens of, for example, North Macedonia, will benefit from a Common Agricultural Policy, and that will change their lives – they will have access to the market, they will have support and then we build the strong political support coming from the population. Because, what is true is that, when we negotiate about EU enlargement, you destabilize clans, corruption gangs, you put people in a weak position, even among the judiciary and the politicians, and if there is no strong support from the population, the Government will be put in a fragile position. So, we want the process to reward those who play the game.

EWB: If I’m not mistaken, you met with President Vučić in 2019 before President Macron’s visit to Belgrade. How do you assess the current level of French-Serbian relations and how does enlargement factor in those relations?

JM: What is true is that we do not see strong will coming from Serbia about enlargement. The impression is that the process is quite frozen. That is a bit disappointing side. The very positive side is that President Vučić is kind of pragmatic and is very open to discuss even the most difficult topics, such as Kosovo, and that is something which has value. This kind of openness is considered an important factor. Certainly, on a bilateral level, relations with Serbia and France are traditionally good, and it is true that there is a commitment of both Presidents to make them even better. So, my wish is that there are no ambiguities on the Serbian side – they should say “we are serious about regional negotiations, we are serious about bilateral relations with France, then we commit also to really make a change in the negotiation process”.