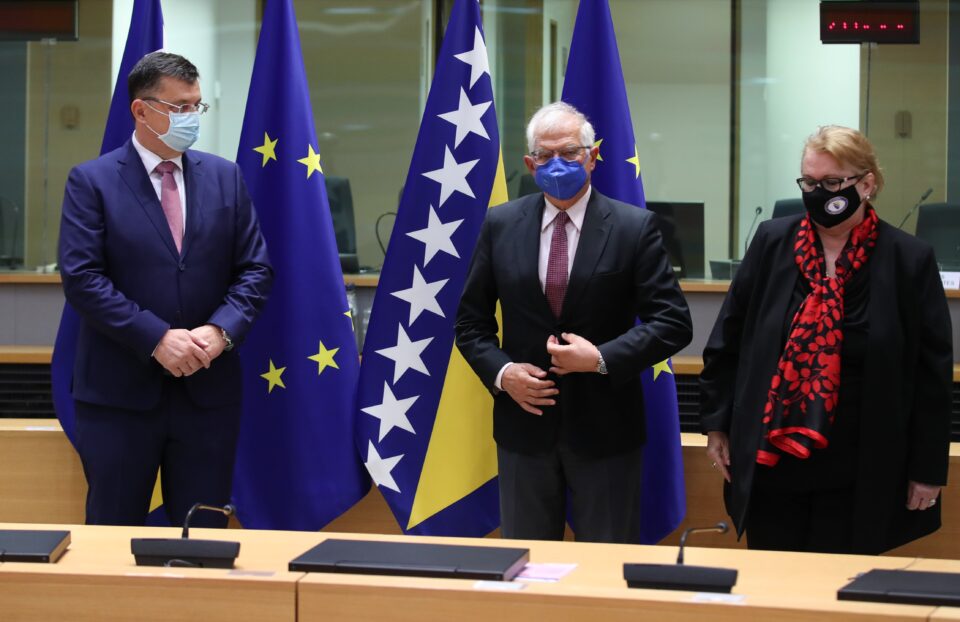 BRUSSELS – The Stabilisation and Association Council (SA Council) between the European Union (EU) and Bosnia and Herzegovina held its fourth meeting on 13 July 2021 in Brussels.

The SA Council took note of the limited progress in reforms, but also of the new momentum and steps taken since last year, despite the challenges arisen from the COVID-19 pandemic crisis, including holding local elections in Mostar, the adoption of the revised national war crimes strategy and of the strategic framework on public administration reform and of strategies on public finance management by all levels of government, as well as the holding of the Stabilisation and Association Parliamentary Committee.

It called for an inclusive process of electoral reform that would eliminate all forms of inequality and discrimination, including at constitutional level where necessary. To this aim, the SA Council welcomed the establishment of an inter-agency working group.

Chaired the EU – #BiH Stabilisation and Association Council today. I expect Bosnia and Herzegovina to make the most of the months ahead to demonstrate that it takes its EU integration seriously. https://t.co/t9LrOH4yIS pic.twitter.com/BzlmDbIZcj


The SA Council recalled the need to swiftly adopt amendments to the Law on the HJPC to strengthen the integrity and accountability of the judiciary. The SA Council also welcomed the adoption of the revised national war crimes strategy and called to establish its supervisory body without further delay.

The SA Council noted that corruption continues to be a serious hindrance to socio-economic development and underlined the importance to address this issue with determination, notably on political party financing and anti-money laundering. The SA Council agreed on the need for Bosnia and Herzegovina to swiftly align its legislation on public procurement and on conflict of interest with European standards and to ensure effective and independent judicial process, including in pandemic-related corruption cases.

It agreed on the need for Bosnia and Herzegovina to establish a functional migration and asylum system, across the country, and to provide suitable shelter to all persons in need and reiterated the importance of enhanced cooperation with the EU and neighbouring countries on border management issues. The SA Council looked forward to swift signature and ratification by Bosnia and Herzegovina of the European Border and Coast Guard (EBCG) status agreement, initialled in January 2019, to allow the deployment of a Frontex joint operation.

Following the recent commemoration of the Srebrenica genocide and 25 years after the Dayton/Paris Peace Agreements, the SA Council urged all political actors in Bosnia and Herzegovina to take concrete steps to promote an environment conducive to reconciliation in order to overcome the legacies of the war.

In terms of the Common Foreign and Security Policy, the SA Council called for an increased alignment with EU declarations and decisions and welcomed Bosnia and Herzegovina’s continued active participation in missions and operations under the Common Security and Defence Policy. The SA Council reiterated its strong support to the executive mandate of the EU military Operation EUFOR Althea.

Vučić and Kurti in Brussels on 19 July, Stano: Focus on the progress achieved to date

Pejović in Brussels: 2018 is key for accelerating EU accession process