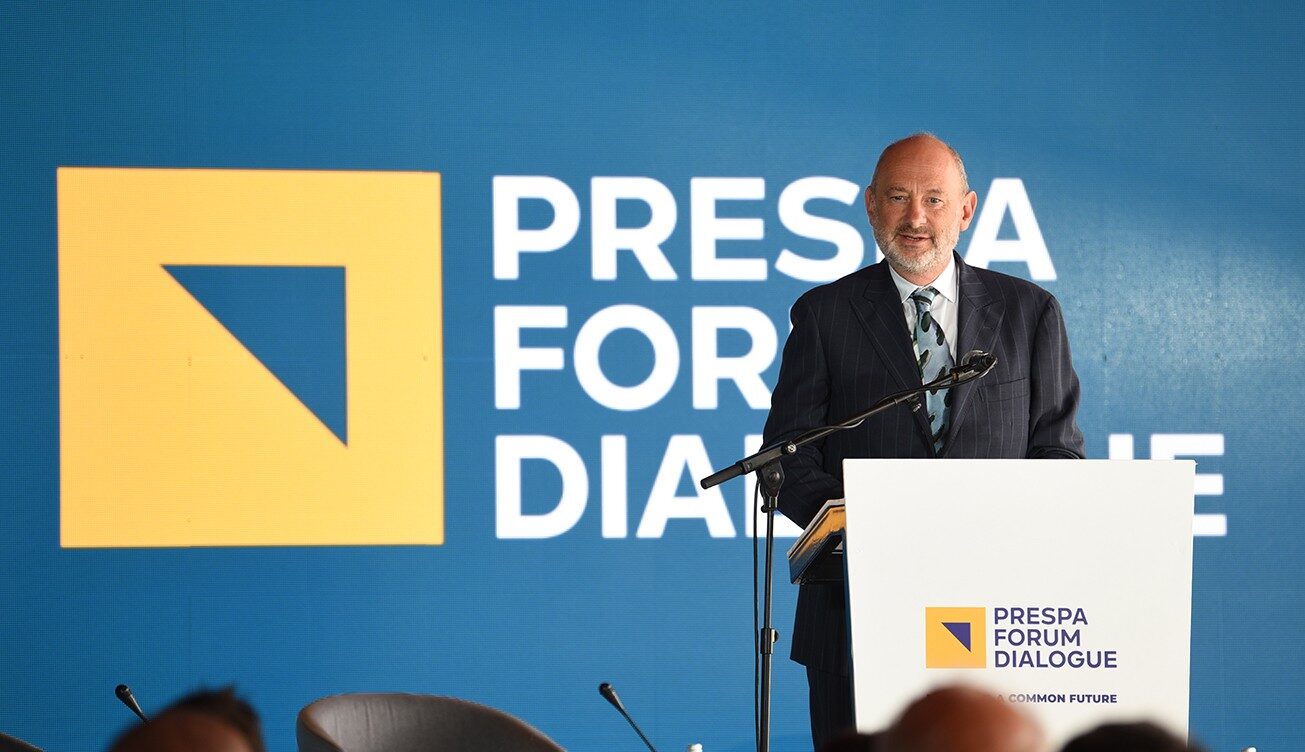 EU Ambassador David Geer arrived in North Macedonia last year in the midst of dispute with Bulgaria that has so far prevented the holding of the first Inter-Governmental conference with the country. This impasse has continued to dominate EU-North Macedonia relations since. The Ambassador stresses that the previous presidencies of the EU have made progress on this issue and that the focus remains on resolving it.

We discussed the dispute, and also looked backed on the Government’s record in the past year, the inaugural Prespa Forum Dialogue held at the beginning of July and the Prespa Agreement which inspired it.

European Western Balkans: In the past weeks, officials of North Macedonia have been expressing significant disappointment over yet another failure of the EU to agree on holding the first Inter-Governmental Conference with the country. Do you think that this is justified?

Ambassador David Geer: I understand the disappointment in the country at this latest delay in the start of the accession talks. People understand that the European Union offers the best prospects for prosperity and stability based on democratic values and the rule of law. Consequently, they want to see negotiations start in earnest as soon as possible.

At the same time, we should not lose sight of the big picture. Firstly, the EU perspective of North Macedonia is not questioned. Quite the opposite. Just in recent weeks we have heard overwhelming and unequivocal support for the EU integration of the country from European leaders both in Brussels and in EU Member States. The place of North Macedonia is in the EU.

Secondly, when it comes to the resolution of the bilateral dispute between Bulgaria and North Macedonia, we are not starting the process from scratch.

The efforts of the previous presidencies of the EU have made progress. The current Slovenian EU Presidency has vowed to continue these efforts to unblock the process. So, this is exactly the time to remain focused and supportive of all efforts to bridge differences and push this across the line. In parallel engagement between Skopje and Sofia should continue in order to find a mutually acceptable agreement to outstanding bilateral issues.

EWB: How do you think the current situation impacts on the EU-related reform efforts in the country?

DG: It shouldn’t impact them. The country needs to continue with reforms for its own sake. Implementation of reforms isn’t just in the interest of the EU, it’s first and foremost in the interest of citizens. Undertaking reforms is the only way to create a safer, more prosperous and democratic country and prevent a youth brain drain. No country in the world can afford not to implement reforms, amid a green and digital revolution and efforts to create jobs that match current needs.

Moreover, it’s important to remember that the path towards the EU is one of reform. Each step forward in implementing EU-related reforms, is a step closer to membership of the EU itself. Whether accession negotiations are launched today, tomorrow or the next day the country will still have to implement an extensive programme of reform. So it’s important to maintain momentum now even as we all continue efforts in parallel to resolve issues standing in the way of the launch of negotiations themselves.

EWB: How would you assess the reform efforts, especially in key areas, since you became the Ambassador to North Macedonia?

DG: North Macedonia has maintained a steady pace of progress on reforms including in the key areas of rule of law such as the judiciary, the fight against corruption and organised crime. I am encouraged by the commitment to further advance the EU reform agenda, in particular in the key areas of the fundamentals.

But, as I have just said, it is important to maintain momentum and further the efforts in many key areas now. These include strengthening the independence of the judiciary, tackling organised crime even more vigorously, proceeding with prosecuting officials where there is abuse of power and corruption and continue with public administration reform on the basis of the principles of transparency, accountability, merit and equitable representation. Efforts are also needed to preserve the public space for debate and discussion by promoting an environment conducive to a free and informed media, in an age of disinformation and fake news. And North Macedonia needs to be able to effectively address the challenges and seize the opportunities arising from the green and digital revolutions and the connectivity agenda. All of these efforts need to be pursued as part of a national project, cutting across political divides and engaging all sections of society.

EWB: Deputy Prime Minister Dimitrov said at the Prespa Forum Dialogue that, following another delay, citizens of North Macedonia do not know whether to expect the EU perspective, which is consistently promised, anymore. Do you think that the narrative on European perspective at the time when things are moving so slowly is actually hurting the EU’s image in the Western Balkans?

DG: Indeed, recent surveys in North Macedonia suggest that the number of those who think that the country is close to EU membership has declined. The growth in uncertainty after delays in the start of EU accession talks is understandable. Nevertheless, I would like to emphasize the positive: recent surveys also show that an overwhelming majority of citizens remain in favour of EU accession. The messages, coming from the Prespa Dialogue Forum from all sides – the EU and North Macedonia – were ones of commitment to the European perspective for the country.

So we are now looking to build on the efforts of successive EU presidencies and achieve the unblocking of the accession talks as a matter of priority. Once negotiations begin, people will be much more confident regarding North Macedonia’s progress towards membership of the EU.

EWB: The inaugural Prepa Forum Dialogue was inspired by the 2018 Prepa Agreement. How do you assess the legacy of the Prespa Agreement? Has it lived up to the praises it received at the time?

DG: The Prespa agreement with Greece was a major breakthrough. It shows that bilateral issues and legacies of the past – complex and painful as they are – can be overcome, through leadership, courage and political will. This agreement is a source of inspiration for the region and beyond. And it has resulted in a significant deepening of ties between North Macedonia and Greece, which is very welcome.

Existing agreements need to continue to be implemented and nurtured as they have a positive impact, not only for the citizens of the countries concerned, but for the region as a whole.

EWB: Another issue discussed at the Prespa Forum was the Conference on the Future of Europe. Can the Conference, in your view, solve any of the internal problems of the EU that are, by some interpretations, contributing to the stalling of the enlargement?

DG: The Conference is a citizens-driven initiative. It is ongoing and touches on a broad range of issues in view of the common challenges and opportunities that Europe will face in the coming decades. So it’s a bit early now to speculate about possible outcomes. But I certainly welcome the discussions that were launched on this issue during the Prespa Forum.