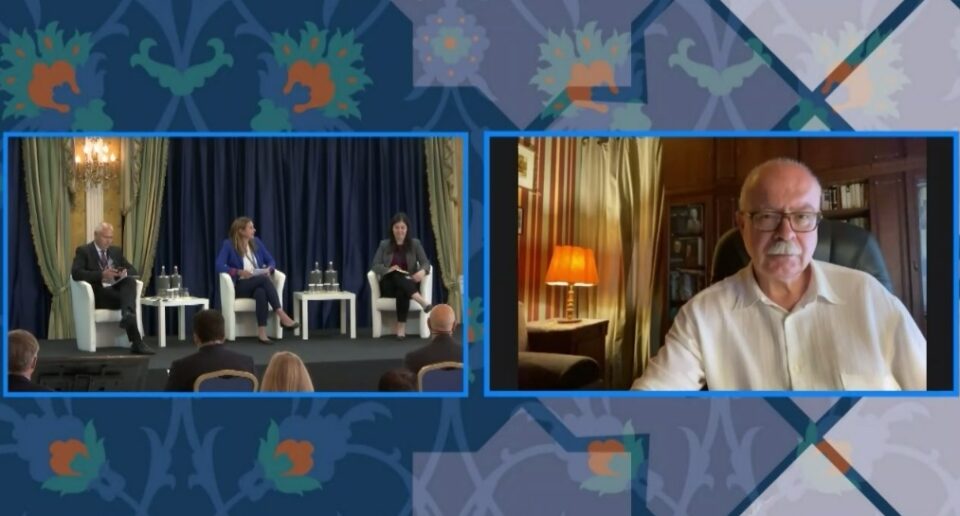 ROME – EU has not yet fully lost the battle for the Balkans, but it has to make a strategic shift sooner rather than later. China is an important challenger in the region, though the alternative it offers might not be as substantive as it seems, while Russia does not have that much to gain from this region, concluded the participants of the first session of the Conference “Black Sea and Balkan Perspectives: A Strategic Region”, organised by the NATO Defense College Foundation.

The session on competition for influence among great powers in the Black Sea and the Balkans, moderated by the Chief of the Deutsche Welle Brussels Bureau Alexandra von Nahmen, was preceded by the welcoming remarks by the President of the Foundation, Alessandro Minuto-Rizzo.

Our Pres. @minutorizzo opens the event with his Welcome Remarks.

“The vast region of the Balkans & the Black Sea comes out as a priority. South-Estern Europe has been for centuries at the crossroads of our history, rich in challenges & opportunities.” pic.twitter.com/ZkFlu2MHa2

Helena Legarda, Senior Analyst at the Mercator Institute for China Studies in Berlin, said that Beijing did not have a strategy for the entire Black Sea and Balkans. It mostly engages with the countries bilaterally, or through 16+1 initiative, she explained.

“China is the newcomer in the region. Its footprint is quite shallow – but it is rapidly expanding”, she said.

“For Chinese leadership, the Western hegemony is an anomaly. It wants to dominate the 21st century in the same way as West did in 20th. It needs to reduce and replace the influence of US and the EU – with this in mind, the Black Sea and Balkans region is an attractive region for China, a fertile ground. A lot of countries are dissatisfied with the EU, they feel abandoned and patronized by the EU, China can fill this void”, she said

According to Legarda, presence of China is still economic, but Beijing does not separate economic and political and strategic considerations. With investments come closer ties with political class

“As the region tries to balance between West and China economically and stay in the Western sphere of influence, there will have to be political concessions. This situation is not sustainable”, Legarda concluded, pointing out that this is therefore the right moment to talk about a potential change of EU strategy towards the region.

Helena Legarda: #China sees the #Balkans as a political and economic opportunity, as a bridge towards #Europe. Especially now that some countries in the region feel like left behind by the Euro-Atlantic institutions.” pic.twitter.com/t3IRWWVXb0

Dmitri Trenin, Director of the Carnegie Moscow Center, spoke about Russian influence in the region. He made a distinction between Black Sea and the Balkans from the perspective of Moscow.

“Black Sea is essentially a region Russia itself is a part of. It cannot overreach itself in that environment. For Kremlin, the most serious potential threat from Black Sea region is Ukraine joining NATO or hosting a Western army. Currently this seems remote, but Ukraine is a country that has become most hostile towards Russia than any other country in the world”, Trenin said.

On the other hand, the Western Balkans is on the lower level of importance to Russia

“It does not pose a threat to Russia and does not offer many opportunities. It is in the Western sphere of influence, including Serbia and Republika Srpska. Russia is using WB, particularly Serbia, for public relations – to show that there are leaders in Europe that are rejecting that narrative of Russia as an aggressor”, Trenin stated.

“For #Russia, the #BlackSea is an area of great strategic importance, where the country aims at preventing security threats over the horizon. The #WesternBalkans, on their hand, belong to the Western sphere of influence.” pic.twitter.com/ePSfwOmuDn

Amer Kapetanović, Political Director of the Regional Cooperation Council in Sarajevo, focused on the reasons why the Balkans is so susceptible to the great power influence.

“There are several factors: the EU enlargement malaise, socio-economic challenges, challenges to the liberal democracy, this has created a geopolitical crack. Either the EU values will come and fill it, or it will be done by other values”, Kapetanović said.

He pointed out that the RCC research shows that more than 60% of people still want to be a part of the EU and want those values to prevail. But the economic gap between the Balkans and the EU is still huge, he said, adding that the infrastructure is in a bad shape and that the region is hungry for investments in that area. He also pointed out that people are losing trust in the liberal democracy.

“They have stopped believing that it can bring about change. People see judiciary as corrupt, parliaments as corrupt, political parties as criminal organisations. This is alarming”, Kapetanović said.

He stressed that the EU has not yet fully lost the battle for the Balkans, but it has to make a strategic shift sooner rather than later. It needs to take steps with enlargement countries.

“According to the @rccint Balkan Barometer, more than 60% of the #Balkan people want the #EU values to prevail over other actors’ ones. They are willing to join the #EuropeanUnion.” pic.twitter.com/pwSuyaysX1

Helena Legarda agreed that the lacking EU integration prospects is playing into the hands of China.

“It is high time for the EU to step in and create clear alternatives”, Legarda said.

She pointed out that the issue with the Chinese alternative is that it is not always as substantial as it seems, with the investment coming from that country sometimes being economically unsustainable, polluting for the environment and causing domestic corruption. She also touched upon the Chinese loans, which have raised the attention in the region recently.

“Some people call it debt-trap diplomacy. I don’t think it is Chinas goal, but the loans are taken in such a way that small countries end up with a very large loan that they cannot repay. Asset seizures are quite rare, in lot of cases there has been a re-negotiation of the debt, and there are certain political concessions that will be expected in return. If EU does not step in, we are probably going to end up in a situation in which China has a lot of political leverage over candidate countries”, Legarda said.

Asked about the relations between the Russia and NATO, Dmitri Trenin said that the current situation consists of learning to live in an environment of confrontation.

“Meeting between Presidents Putin and Biden in Geneva was a good opportunity to exchange red lines. I think that we are seeing elements of better management of the situation – the dialogue on strategic stability between deputy foreign ministers of USA and Russia in Geneva as we speak”, he said.