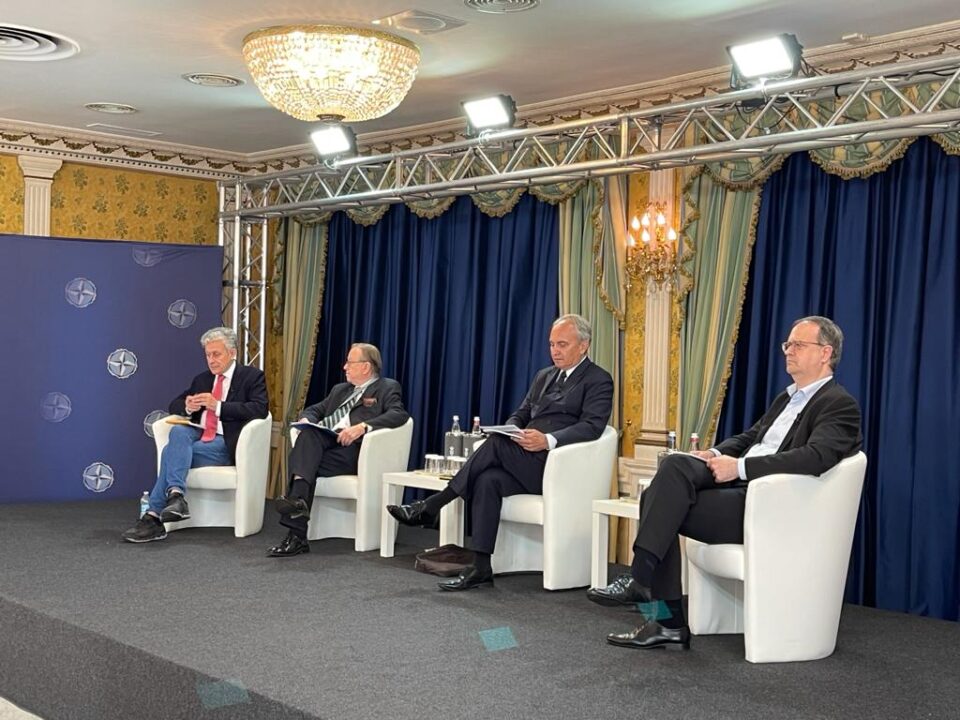 Speakers at the second session of the Conference; Photo: Twitter / NATOFoundation

ROME – Disinformation campaigns, some activities of the third actors, but also mistaken policies adopted by the EU and the US are all endangering security of the Balkans.

The participants of the second session of yesterday’s Conference on the Black Sea and the Balkans region organised by the NATO Defence College Foundation tackled the issue of regional security and inclusion.

Read the report from the first session: “Geopolitical crack” in the Balkans calls for a strategic shift of the EU

The main threat to security, democracy and stability in the Western Balkans emanates not from the third actors, but from the West, assessed Bodo Weber, Senior Associate at the Democratization Policy Council in Berlin.

“Since 2015-2016, there has been a U-turn in the politics towards the Balkans”, Weber said, describing how the West went from being too weak to positively influence the region to outright exporting disability.

He pointed at the proposal for a border change between Kosovo and Serbia which, he said, had the support from both the EU Foreign Policy team, led at the time by Federica Mogherini, and Donald Trump’s White House.

“Had that deal come through, it would have undone the stabilisation efforts and returned the region to 1990s”, Weber said.

He assessed that effort of the West to bring about reforms in the region, such as electoral reform in Bosnia and Herzegovina, is following the transactional quick-deal approach accommodating to regional leaders. He also assessed that the enlargement policy has moved beyond the enlargement fatigue and to fundamental threat to enlargement.

According to Weber, President of France Emmanuel Macron is wrong to assume that the internal reform of the EU can take place separately from enlargement. His policy towards the region, which does not accept enlargement, is a mistaken one, and while Germany has maintained the support for enlargement, it has been unwilling to “pick up a fight” with France on this issue. Weber expects it to be taken up after the French presidential election next year. This discussion, he says, will determine the future of the region, not only in the EU but in general.

Alina Bârgăoanu, Member of the European Commission’s High-Level Expert Group on Fake News and Online Disinformation, analysed the “infodemic” that closely followed the COVID-19 pandemic in the Black Sea and Balkan region.

“Coordination disinformation campaign and information warfare combined to create distrust”, Bârgăoanu said, giving the examples of the conspiracies on virus being spread by the 5G technology, or NATO military, and the rejection of the conventional medicine.

“Western Balkans and Black Sea became the battle ground during the pandemic for geopolitical gains. Some older myths were recycled – that nobody cares about EU enlargement, that NATO will not protect member countries”, Bârgăoanu stressed.

She said that one of the goals of the campaign was to overemphasise ethnical and religious identities and that the campaigns in the region shared three types of similarities: in terms of strategic narratives, in terms of objectives – spread panic, distrust towards authorities – and in terms of exploiting pre-existing structural weakness. This creates solidarity, awareness in the region.

Ahmet Evin, Founding Dean of the Faculty of Arts and Social Sciences of the Sabanci University in Istanbul, assessed that several external actors continue to extend their influence in the Black Sea and the Balkans, creating cleavages in the process.

“Turkey’s involvement in the Balkans is directed exclusively at extending Muslim identity in the region has had the same dividing effect as other external actors. It is a soft-power diplomacy since AKP came to power”, Evin said.

He stressed the difference between the foreign policy goals of Russia and Turkey.

“Ankara’s intervention in different regions may point in the different directions. It is an investment into internal politics, expecting a return at the ballot box”, Evin said. This is different from Moscow’s approach, which usually has singular goals.

Solomon Passy, President of the Atlantic Club in Bulgaria, proposed a way to to materialise the potential of the Balkans – USB – United States of the Balkans. This would create a market of 55 million people, which would be particularly attractive for the businesses in the areas of telecommunication and energy.

“We have some challenges – dispute between North Macedonia and Bulgaria is manageable, Russia and China and solvable – but the main challenge is lack of leadership and distrust”, Passy said.

However, he reminded that Italy was also partially a Balkan country and that its leadership can “do miracles” for the Balkan peninsula.

Oleksiy Melnyk, Co-Director, Foreign Relations and International Security Programme,
Razumkov Centre in Kyiv, said that citizens of Ukraine are “a bit jealous” of the NATO membership of the countries in the Balkans, because in some areas they believe they are more prepared.

“But they understand the geopolitics of the criteria”, Melnyk said.

He added that, according to research, Ukrainians have a positive and a realistic view of NATO in terms of security. However, they do not see a clear link between NATO membership and the level of democracy, rule of law and economic development in the country.