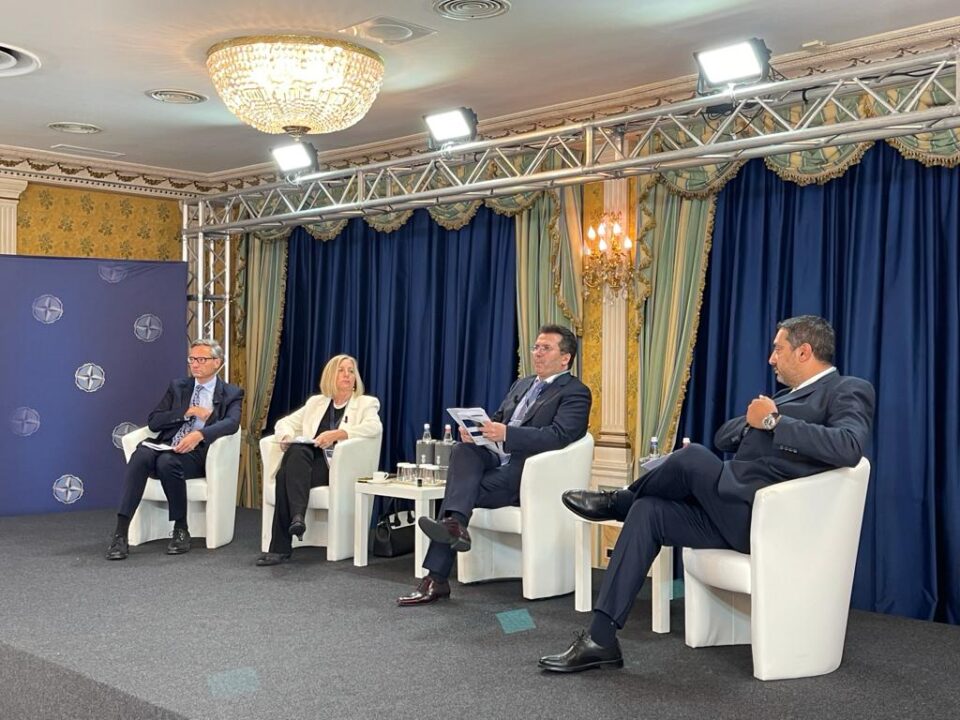 The third session of the Conference “Black Sea and Balkan Perspectives: A Strategic Region”; Photo: Twitter

ROME – Organized crime and terrorist groups pose a threat to the Western Balkans and the Black Sea region, as well as to the values of NATO and the European Union, so a common approach is needed in the fight against these non-state actors, stressed the participants of the third session of the Conference “Black Sea and Balkan Perspectives: A Strategic Region”, organised by the NATO Defense College Foundation.

He stressed that the Balkans is also affected by drug trafficking and producing synthetic drugs.

Walter Kemp, Director of  South-East Europe Observatory at Global Initiative against Transnational Organized Crime, highlighted rising trends in the area of organised crime both in the Balkans and Black Sea region.

“One is the growing impact of cocaine trafficking through the Balkans and the Black Sea region, the second is the fact that the transnational tentacles of groups from the WB are now stretching all around the world”, he said adding that the growing sophistication of the criminal groups complicates things even more.

Kemp explained that not only organised crime is a danger in itself, but that it also represents a threat linked to other threats – it strengthens corruption, undermines democracy and the rule of law, it helps in creation of everything opposite of what NATO and EU stand for.

As he noticed, the existence of several grey zones in the Balkans and Black Sea region, with weak governments represent the suitable ground for organised crime.

According to him yet, things can get better and for that to happen, the stakeholders must among other things, stop coddling stabilitocracies and call out the danger of corruption and the influence of organised crime on governance and work with NATO countries and partners to address it.

Rabiè W. Sédrak, Head CT Program at Center for Security Research from Skopje, pointed out that the Western Balkans region is very specific, due to its geographical position.

“The region of the Western Balkans is very specific because of its position between Europe and the Middle East and Africa, where wars are happening now, where there are instabilities”, says Sedrak.

According to Sedrak, nowadays, the connection between terrorist organizations and criminal groups is very pronounced, and mutual cooperation is a win-win option for both sides.

He assessed that they have similar structures, but also and doctrines.

„Terrorist groups in the Balkans have very similar structures to other organised crime groups, with similar doctrines and use of forces. Organised crime also helps terrorists through logistic, economic, and physical means“, says Sebrak.

He stressed that various forms of prevention are needed to combat extremism.

This organization is law enforcement, a treaty-based international organization that bring together the resources and expertise of Police and Customs authorities that join synergies in combating more effectively trans-border crime in the region.

SELEC, as a successor of SECI Center founded in 1999, is established to provide support to its 11 Member States (Republic of Albania, Bosnia and Herzegovina, Republic of Bulgaria, Republic of North Macedonia, Hellenic Republic, Hungary, Republic of Moldova, Montenegro, Romania, Republic of Serbia and Republic of Turkey), to enhance the coordination in preventing and combating crime, including transnational serious and organized crime.

“We represent a synergy of the states and their capacities in order to have better results in the fight against organized crime. We have countries that are EU member states and those that are not, and after 20 years I can say that we have managed to build trust between countries with different economic and political contexts”, says Maleeva.

According to her, trust is a very important part of success fight against transnational crime.

She pointed out that SELEC cooperates with over 25 other countries and organizations for this purpose. citing the example of excellent cooperation with Japan, a country that is far from the region.

Maleeva added that there is extremely good cooperation between the police and the prosecutor’s offices of the SELEC member states in order to suppress organized crime.