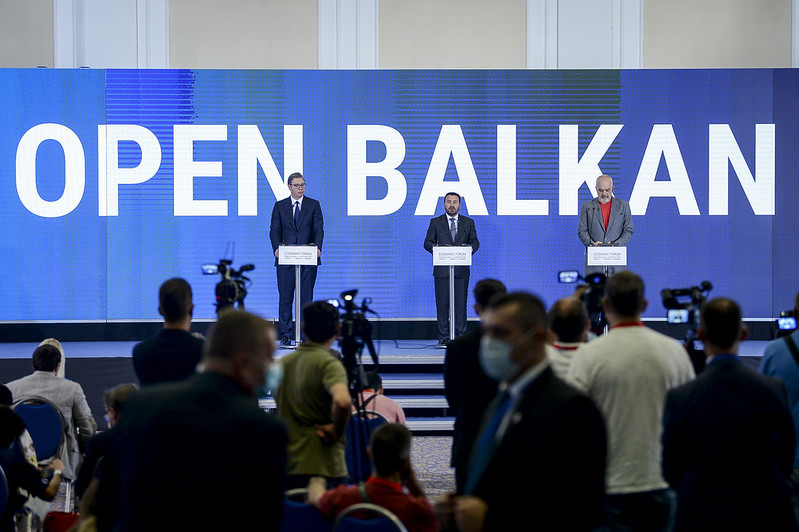 PRISTINA / TIRANA / SKOPJE – Following yesterday’s conference in Skopje where the leaders of Albania, North Macedonia and Serbia renamed the “Mini Schengen” to “Open Balkan” initiative and committed to further regional integration, Government of Kosovo remains opposed to it. Governments of Montenegro and Bosnia and Herzegovina, which are also not part of the initiative, have not had any comments so far.

Even before the yesterday’s conference, which saw the change of the name of the initiative, Prime Minister of Kosovo Albin Kurti has dismissed the “Mini Schengen” free economic area initiative by Albania, Serbia and North Macedonia as “visionless,” and called for the region to enter a trade agreement with the European Union instead.

“The initiative… does not have our approval, hence we received no official invitation to join this meeting. We consider the so-called ‘Mini Schengen’ as a visionless initiative for the region. We have proposed to advance regional cooperation by moving from CEFTA to SEFTA, according to the EFTA-EEA model, from which all Western Balkan countries would benefit simultaneously,” a press release by the Kosovo government stated on Thursday, Exit reports.

Another reaction came today from Minister of Foreign Affairs of Kosovo Donika Gërvalla. In a joint press conference with her counterpart from Skopje, Gërvalla ruled out the necessity of the region for these initiatives.

“It creates the idea of conveying a message that there is another alternative apart from the region’s joint path to the EU. Conveying this message is as dangerous as the delays in the European integration”, said Gërvalla, Euronews Albania reports.

Not everybody in the participating countries see the need for the initiative either.

All the benefits that can be achieved from this initiative  can also be achieved within the Common Regional Market, Genc Pollo, former Albanian Minister of Innovation and Information Technology and one of the founders of the Democratic Party of Albania, told Serbian Danas.

Pollo notes that the Common Regional Market is a “child of the Berlin Process” and refers to “trade, the labor market, border crossing and other issues”, and that it “has the support of the European Union”.

Opposition VMRO-DPMNE party in North Macedonia also harshly criticised Zoran Zaev for the initiative, describing it as an alternative to the EU membership.

“Macedonia belongs to the wider European family of countries and such attempts of Zaev to show a multilateral cooperation of the Balkan countries as a huge diplomatic success is in fact a diplomatic failure to achieve the goal – EU membership. It is obvious that apart from the failures at home, Zaev’s government is also facing defeat at the international level. For four years, he shamelessly lied to the citizens about Macedonia’s European integration, looking for an alibi and culprits in others, only to end up in “Mini Schengen”, VMRO-DPMNE’s statement, released ahead of the Conference, reads.