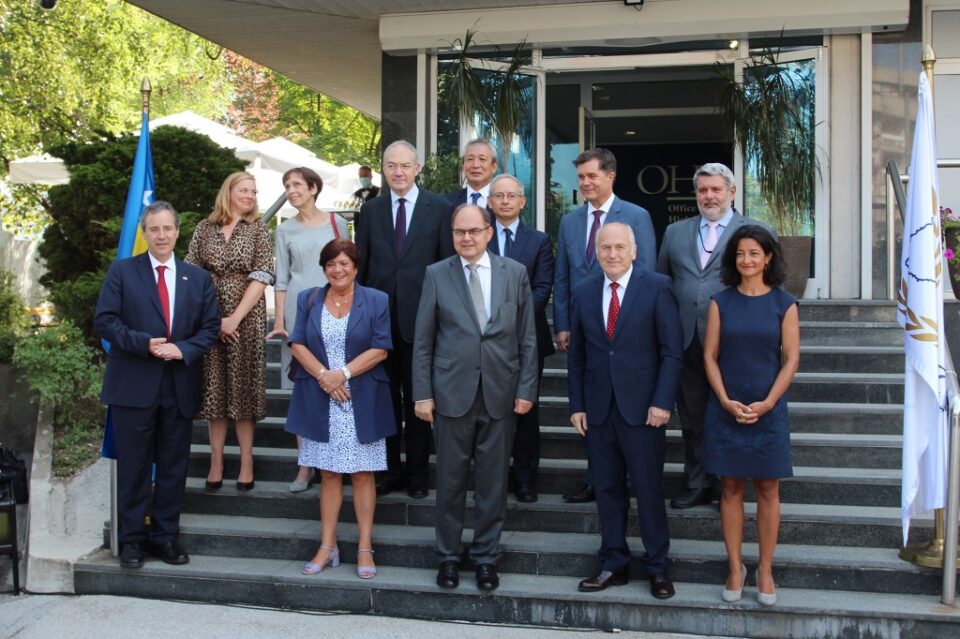 SARAJEVO – The official handover of the position of High Representative from Valentin Inzko to Christian Schmidt took place on Monday, in the presence of the Peace Implementation Council Steering Board ambassadors and state secretary of the Federal Ministry of Foreign Affairs of Germany, Miguel Berger.

“I am honored and pleased to serve your country and its people in the years to come. I take office firmly determined to help people. I do not want to promise anything impossible for the time to come, but I assure you that I will use all my strength… to ensure that this country… has hope for a better future”, Christian Schmidt said, Radio Free Europe reports.

Following his arrival in Bosnia and Herzegovina on 30 July, High Representative Schmidt visited the city of Mostar on Sunday. Later that day he arrived in Sarajevo, where he was welcomed by Principle Deputy High Representative Michael Scanlan. He also paid a courtesy visit to Sarajevo Mayor Benjamina Karić.

Schmidt is set to meet Members of Presidency of Bosnia and Herzegovina Šefik Džaferović and Željko Komšić on Tuesday, with Milorad Dodik refusing to meet with Schmidt, calling him “false and unelected” High Representative, RFE reports.

On 1 August, Dodik stated that the great powers had set out to blindly violate international law and the Dayton Agreement, and that “we cannot believe in the good intentions of Christian Schmidt.”

“Mr Schmidt, you are not welcome here. You are not an elected High Representative and Republika Srpska will not respect your decisions,” Dodik said, Nezavisne report.

He said that Annex 10 of the Dayton Agreement, which prescribes that all signatories of the Annex and the UN Security Council need to consent to the new High Representative, was violated in the case of Schmidt’s appointment.

PIC Steering Board condemns the reactions to amendments on genocide denial, Russia does not support the statement

In a statement on Saturday, 31 July, The Ambassadors of the Peace Implementation Council Steering Board (PIC SBA) strongly condemned the escalation of tensions by some political leaders in response to the recent amendment of the criminal code, and steps taken by the Republika Srpska National Assembly that would undermine stability and impede effective government. On 30 July, RS parliament adopted a law on non-implementation of the decision of the High Representative outlawing genocide denial. It also amended the Criminal Code of Republika Srpska which banned the labelling of the entity as a genocidal creation.

Russian Federation did not agree with the statement.

“Rhetoric and actions which undermine the functioning of the state of Bosnia and Herzegovina, including the boycotting of state-level institutions and the blocking of vital decision making, are destabilising and contrary to the Dayton Peace Agreement. Such activity does not serve the interests of the citizens of Bosnia and Herzegovina and impedes European integration and progress on the 14 Key Priorities”, the statement reads.

The PIC SBA called upon authorities to refrain from destabilising behaviour and urged all political leaders in Bosnia and Herzegovina to focus on supporting peace, stability and prosperity for the citizens of this country and advance reconciliation, built on mutual recognition, empathy and respect for all victims.

Schmidt meets with Džaferović and Komšić, Dodik refuses to come