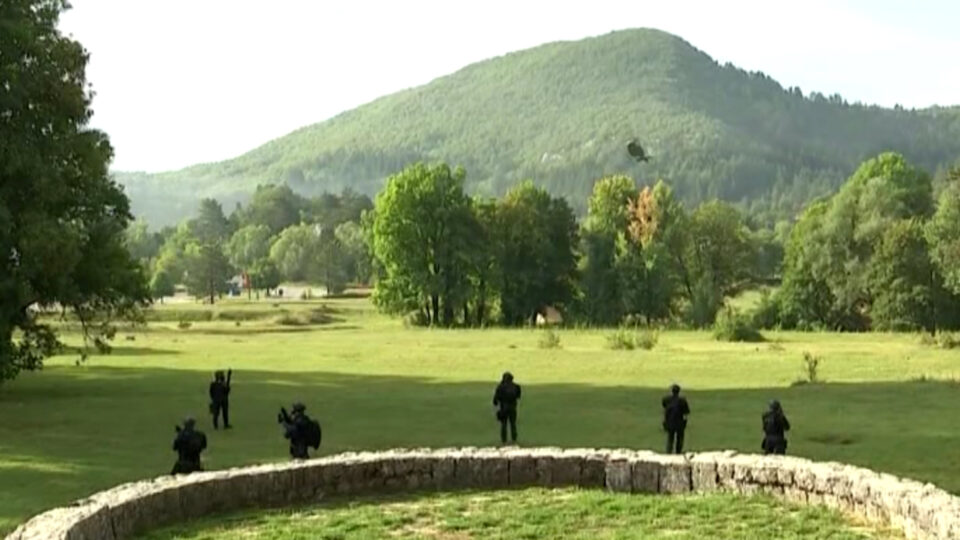 Police at the Cetinje Monastery on 5 September; Photo: FoNet

BRUSSELS / PODGORICA – European Commission Spokesperson Ana Pisonero called for the restraint in Montenegro following the developments in the country over the weekend, Radio Free Europe reports.

“Every use of force must be measured and proportionate at all times. We call for restraint and we expect all competent authorities to properly investigate and ensure effective judicial monitoring of all cases of violence, both against the protesters and against police officers”, said Pisonero.

She pointed out that freedom of assembly is a fundamental right of the EU, but underlined that it should, at the same time, be applied without harm to public health and with full respect for the rule of law, public order and security of all Montenegrin citizens

Violence erupted in the Cetinje, old capital of Montenegro, on Sunday, after opposition supporters and self-declared patriotic groups clashed with police, trying to stop the new local head of the Serbian Orthodox Church in the country from being enthroned, Balkan Insight reported.

The decision to hold the ceremony in Cetinje, which was once the royal seat of the country and the center of its independence efforts, was at the centre of the controversy. The opponents of the enthronement saw it as symbolism of the threat to Montenegrin independence by Serbia.

Police used tear gas to break up the protests. Former head of the police, Veselin Veljović was among those arrested.

Police reported that two officers were injured while eight protesters were arrested during the clashes in Cetinje.

As the roads to Cetinje were blocked by barricades and protesters, Serbian Orthodox Church Patriarch Porfirije and the new Metropolitan of Montenegro Joanikije had to be transported to Cetinje by army helicopters. They were escorted to the monastery protected by bulletproof shields, while police used tear gas to disperse protests nearbyWe strongly condemn all forms of violence.

On Sunday, Embassies of France, Germany, Italy, United Kingdom and the United States, as well as EU Delegation to Montenegro, released a joint statement urging for the preservation of peace and public order.

“We  appeal to all citizens to responsibly contribute to preserve peace, upholding  public order, and to police to strictly use only necessary and legal means. Individuals will need to be held to account for their actions”, the statement reads.

The Embassies stated that the priority in the coming period should be to establish a democratic, inclusive and constructive political dialogue, including all sides who are sincerely committed to a bright European future for this NATO country, upholding respect for fundamental freedoms, in particular freedom of expression, freedom to peaceful assembly and freedom of religion.

“All who stand on these principles to work on reconciling the society will have our continued support”, the Embassies underlined.

On Saturday evening, the day before the enthronement took place, Member of European Parliament and Chair of the EP Delegation Stablisation and Association Parliamentary Committee with Montenegro Vladimir Bilčik urged the leaders to calm tensions.

“I am very concerned about the news coming in from Podgorica and Cetinje. I would urge political and religious leaders to calm tensions across the country and to protect fully Montenegro’s tradition of a diverse, respectful and modern European society”, Bilčik tweeted.

MEP Tonino Picula, EP Rapporteur for Montenegro, condemned the violence that took place over the weekend.

“I strongly condemn violence on the inauguration of Metropolitan Joanikije in Montenegro. Freedom of religion and feelings of believers should be respected, but religious manifestations should not be abused for political purposes. Freedom of expression, but also of protest, is inviolable”, Picula tweeted.

Prime Minister of Montenegro Zdravko Krivokapić, following the enthronement ceremony, tweeted that “the state is defended”.

“I thank all the brave policemen, but also the people of Montenegro who helped us all celebrate this magnificent moment here today,” Krivokapic wrote.

Krivokapić also stressed that the delay of the ceremony, which some media reported on Saturday evening, was not an option.

On the other hand, in an address to the public on Sunday, President of Montenegro Milo Djukanović said that the country had witnessed a great shame of the Serbian Orthodox Church and the Government of Montenegro in Cetinje.

“By brutally abusing state resources, primarily the army and police, and completely inappropriate use of force against peaceful crowd in the Montenegrin Old Royal Capital, the Montenegrin government secured the violent enthronement of Metropolitan Joanikije against the will of the vast majority of Cetinje residents and a significant number of Montenegro’s citizens… Cetinje was up to the task once again as many times in the history of Montenegro,” the President stated, CDM reports.

Picula: I call for a constructive dialogue in Montenegro