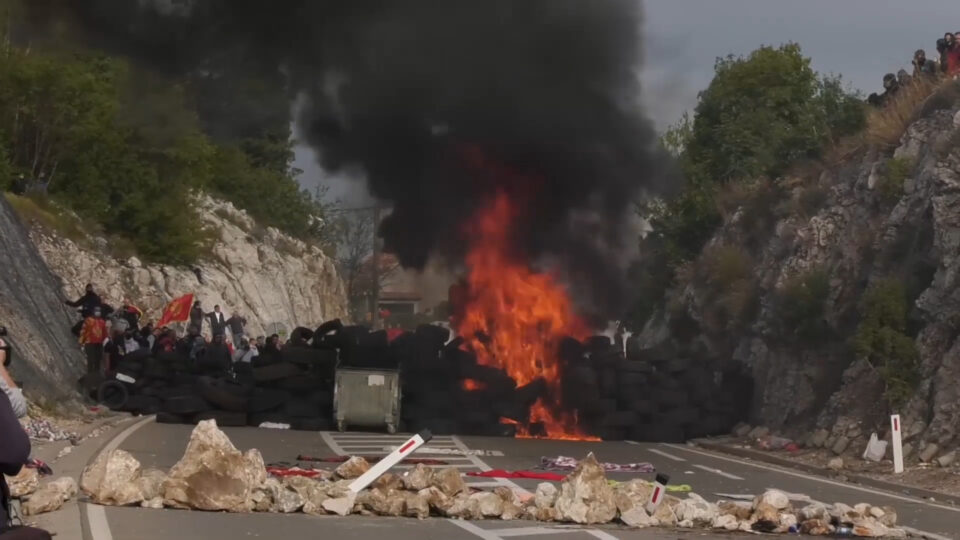 Blockade on the road to Cetinje; Photo: FoNet

While there is little dispute over interpreting the weekend events in Montenegro as a political defeat for President Milo Đukanović, the question of whether they mark the rise of influence of the official Belgrade in the country has been subjected to differing views.

On the one hand, the enthronement of Metropolitan Joanikije in Cetinje monastery, which ultimately went through despite the protests, has since been described as a success of the “Serbian World” policy promoted by the members of Serbian government and the ruling SNS party. The Serbian Government managed to achieve this goal, according to this view, through its influence over the Government of Montenegro, which enabled the ceremony to take place and dispersed the protests.

Other interpretations stress that the rise of tensions in the first place was a result of possibly coordinated attempts of Presidents Milo Đukanović and Aleksandar Vučić to destabilise the Government of Montenegro led by Zdravko Krivokapić and Dritan Abazović, which was forced to manoeuvre between the two sides.

Srđan Cvijić, Senior Policy Analyst with the Open Society European Policy Institute in Brussels and a member of Balkans in Europe Policy Advisory Group (BiEPAG), does not think the events show a growing influence of official Belgrade over Montenegro.

“On the contrary. Days before the enthronement, President Vučić, via his tabloid propaganda machine, started a poisonous campaign fueling tensions in Montenegro and falsely accusing the Montenegrin Government and its Prime Minister of permitting supposed “lynching of the Serbs” and other falsehoods that resembled the nationalistic rhetoric of Milošević’s regime in the 1990s. Together with Đukanović’s raising of tensions on the one side, Serbian regime tried to raise the tensions on the other, amongst the worshipers of the Serbian Orthodox Church”, Cvijić says for our portal.

He assesses that the Montenegrin government showed its ability to govern by preventing the conflict between thousands of supporters of the Serbian Orthodox Church in Podgorica and other cities and those protesting against the enthronement and limiting the troubles to skirmishes between the police and protesters in Cetinje.

“It is difficult to dismantle 30 years of the authoritarian regime. Despite the regime change, Đukanović’s supporters remained present in the institutions, most importantly amongst the country’s security structures. For this reason, it was difficult to judge to what extent is the new government able to control the situation in the face of serious troubles. With last weekends’ violent protests, the former regime has paradoxically given the new government an opportunity to show its strength, and they managed to pass the test”, Cvijić adds.

One of the major conclusions of the observers of the events was that the political influence of President Milo Đukanović, whose party lost its first parliamentary election in 30 years on 30 August 2020, is in decline. An event that raised significant attention on Sunday was the arrest of Veselin Veljović, former director of the Police Department and current advisor to Đukanović, for an alleged attack on policemen during the protests. Veljović has subsequently been released and is awaiting trial.

“A defeat of Milo Đukanović – maybe even more serious than the one on 30 August 2020. He has lost international support, his security advisor has been arrested, he failed to do what he intended and announced. Is he finished?”, tweeted Professor at the University of Zagreb and Balkan expert Dejan Jović on Sunday.

Srđan Cvijić also sees the events over the weekend as a significant defeat of Đukanović.

“Creating tensions around the enthronement of the Serbian Orthodox Church metropolitan was the former regime’s way to drive a wedge between different parties in the Montenegrin government, create instability, protect Đukanović’s informal power base and ultimately try to seize back the power. By trying to politically instrumentalize the protests, provoke conflict, including the participation of some of his closest collaborators in violent attacks against the police, Đukanović has discredited his party DPS in the eyes of the vast majority of the population of the country”, he says.

In his opinion, last weekend’s violence showed that the representatives of the ex-regime in Montenegro represent a liability not only for the stability of Montenegro but also that of a wider region.

“With such irresponsible political behavior towards the religious ceremony of the enthronement of the metropolitan of the SOC in Montenegro, Đukanović has practically dethroned himself from the position of the president, seriously risking to end his term in office before the scheduled elections in 2023”, Cvijić concludes.

“Deteriorating relations that used to be close”

Multiple commentators have also assessed that the events mark an end of what they saw as discrete cooperation between President Vučić and Đukanović, which both men denied in the past. Opposition politician in Serbia Vuk Jeremić stressed that Vučić was helped by Đukanović in coming to power in 2012, but has no need of his cooperation any more due to Montenegrin President’s weakened position.

In a rare instance of direct attack, Vučić accused Đukanović on Sunday, following the enthronement ceremony, of “ruling over Serbia” through criminals, policemen and other holders of public office, claiming that he will not be able to do so in the future.

Florian Bieber, Professor at the University of Graz and BiEPAG coordinator, also assesses that the relations between Vučić and Đukanović used to be close before deteriorating, and believes that the escalation over the enthronement has been an easy way to play on identity politics, benefiting both presidents.

“Previous Metropolitans have had ceremonies in Cetinje and considering that the Serbian Orthodox Church is the larger religious community in Montenegro, there should have been little controversial about this event. However, the politicisation of this normally religious ceremony was promoted by both nationalists or rather their political promoters. Since Đukanović broke with the Church and engaged in an open conflict, this was another opportunity to escalate matters”, Bieber says for European Western Balkans.

He reminds that the controversial law on religion that was passed in late 2019 was already source of contention that played an important role in defeat of the DPS in August 2020 elections.

“Since, Đukanović has been seeking to present his party as the only defense against a Serbian takeover of the country and sought to closely tie all supporters of Montenegrin statehood to his fate. He thus sought to politicise the event by mobilising against it”, Bieber assesses.

On the other hand, he notes, Serb nationalists and Serbia has seen an opportunity to extend their influence in the country since the fall of the DPS government and deteriorating relations between Đukanović and Vučić that used to be close.

“The idea of a Serbian world, i.e. a Serbian sphere of influence has increased Serbian engagement. Of course, the enthronment itself is not an increase of Serbian influence, but it could be argued that the previous Metropolitain Amfilohije kept a distance to Serbia, not for the lack of Serb nationalist positions, he supported war criminals such as Radovan Karadžić during the 1990s, but because he sought to maintain his own independence. Now, the church is under greater influence of the Serbian president. As a result of the escalation and clashes, both radicals have won and space for moderates and reforms who don’t want to play identity politics has shrunk”, Bieber concludes.

Grk: Brdo Summit brought back the interest of the EU towards Western Balkans