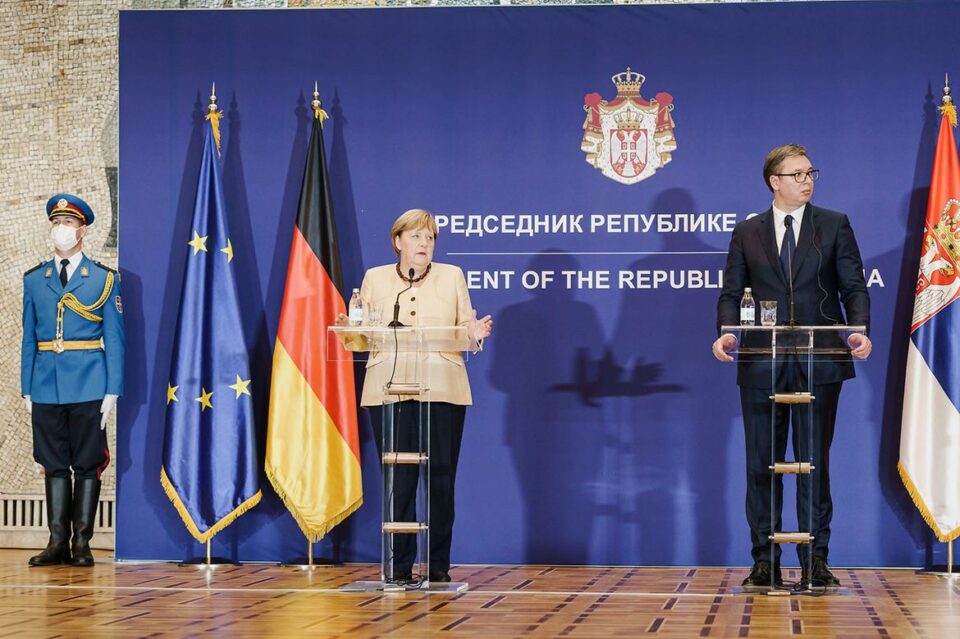 BELGRADE – German Chancellor Angela Merkel told reporters in Belgrade on Monday evening that she had discussed domestic policy with Serbia’s President Aleksandar Vučić, adding the country needed reforms for the opening of new chapters in negotiations with the European Union, and stressed the importance of progress in the legal system in Serbia, N1 reports.

„I am glad to hear that Serbia is intensively dealing with judicial reforms, and the EU is here and must assess that,“ Merkel said.

She added she would have the meeting in Tirana on Tuesday with the prime ministers of other Western Balkans countries.

Speaking about the Berlin Process, Merkel pointed out that every elected chancellor of Germany will advocate for the processes in the Western Balkans, he will be interested in that, because that initiative could not be implemented without the EU.

“I am optimistic that we will continue”, said Merkel, adding that the “Open Balkans” initiative launched by Serbia, Albania and Northern Macedonia is the “second best” for the future of the region, but that the process must be open to the other three countries if they want. to join, and the goal is to have all six countries in it.

She added the two „talked about Kosovo and Bosnia and Herzegovina, many topics. I believe in sincerity in talks and the ability to listen to the other side and develop benefits. That is what characterises our relationships.

„Vučić does not make false promises, but tries to implement them, and that is why I thank him for his cooperation and encourage further steps in the rule of law and pluralistic society. Economic successes should be an incentive that EU membership is a worthwhile goal,“ she said.

Answering the question of whether the condition for Serbia’s membership in the European Union is the recognition of Kosovo’s independence, German Chancellor said that some issues will be resolved at the end of a process, but that not all EU member states have recognized Kosovo.

The issue must be resolved in order for the current member states to answer in the affirmative, but there is no sense in discussing the end of a process, Merkel said.

Referring to her visit to Belgrade 10 years ago, she stated that she was pragmatic, that the issue “will not disappear”, but that it is important for the roadmap that all other issues be resolved in the meantime.

Merkel mentioned some concerns about the functioning of the EU, adding that was why the French president Emmanuel Macron initiated reforms by introducing a new cluster methodology.

„Sometimes the perception is that the process is slow and that the European side is making new demands, but we see results and progress. The Berlin Process has increased connectivity in the region, which helps the accession process. The geostrategic interest is for all countries to join the EU,“ the Chancellor said.

Merkel also answered a question about the Rio Tinto lithium mine in Serbia, which caused great concern among the country’s environmentalists, saying the EU would undoubtedly deal with the issue.

„Serbia has something really valuable, but there are concerns whether the exploitation will be in line with environmental standards,“ she said.

Merkel added she thought „the EU has good standards, the member states will certainly deal with that issue because climate neutrality in Europe is a significant issue.“

Speaking at the conference, Vučić specified they talked about Serbia’s European integration and the harmonisation of Belgrade’s foreign policy with the Union’s, adding that in the last four months, it had increased from 46 percent to 62.5 percent.

„Serbia still has a lot of work to do in the field of the rule of law,“ Vučić said. „We are committed to constitutional reform, judicial reform, reform of the media and the entire political sector,“ he added.

He added that „we know very well“ that resolving the Kosovo issue, i.e., the relations between Belgrade and Pristina, as a condition for Serbia’s accession to the EU, and that a frozen conflict was not the solution.

He also announced the arrival of the President of the European Commission, Ursula von der Layen, in order to sign the contract on the Nis-Merdare highway. Vučić announced that he would hold a Merkel toast in German at a joint working dinner, because her visit to Belgrade was a great honor for him personally, since he had been begging to do so for two years.