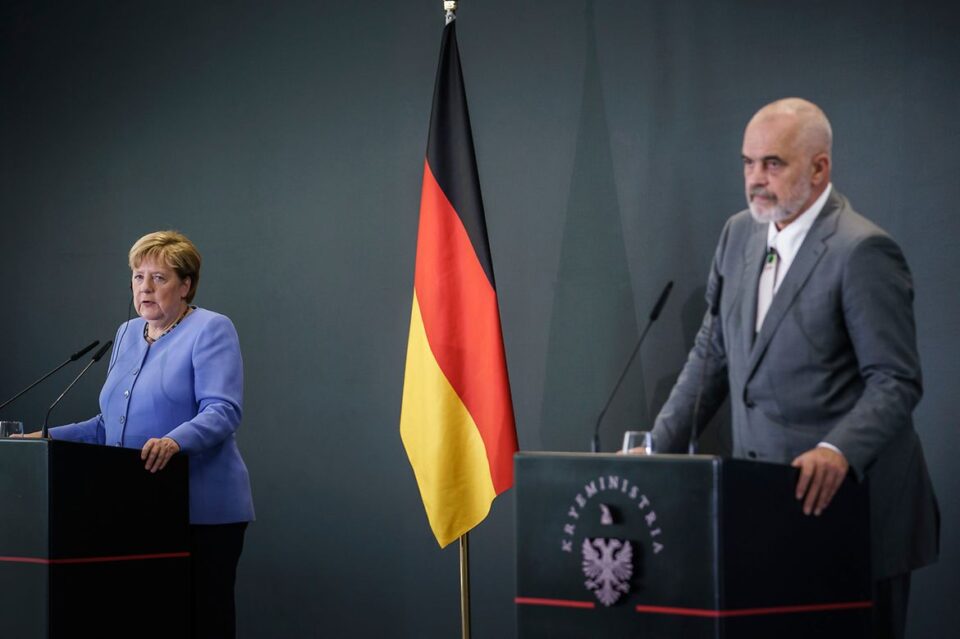 TIRANA – German Chancellor Angela Merkel stressed during yesterday’s press conference with Prime Minister of Albania Edi Rama that the Berlin Process should be the centerpiece of the regional cooperation.

The conference took place in the Albanian capital, during Merkel’s final visit to the Western Balkans as German Chancellor. On Monday, Merkel visited Belgrade, where she met with President Aleksandar Vučić.

Following the introductory remarks, one of the journalists’ question directed to Rama was whether Open Balkan or the Berlin Process should prevail on the agenda. Chancellor Merkel responded to the question as well.

Rama proceeded to describe the Open Balkan as a “child of the Berlin process”.

Earlier during the press conference, Merkel welcomed the project of the common regional market with the four arrangements.

“Not everyone participates immediately. We talked about that in great detail today. Some are already in the process of implementing that; others are still thinking. But I think that we all agreed today that the more we work together in this context, the better and stronger the Berlin Process is”, Merkel said.

She also congratulated Albania on the efforts that have been made in the legal system in recent years.

“Both Albania and North Macedonia have reached a state where we can start accession negotiations and hold the accession conference. Unfortunately, we did not succeed in doing this during the German Council Presidency because there was an objection from a member state, namely Bulgaria, with regard to North Macedonia. But we discussed that it is imperative that we hold on in order for the accession process to move forward. Because a lot of effort and effort has been put into this process”, Merkel said.

In his remarks, Rama payed tribute to Merkel.

Prime Ministers of the Western Balkan six met with Chancellor Merkel for a joint working lunch yesterday in Tirana.

The joint meeting is attended by the Prime Ministers of Albania, Montenegro, North Macedonia, Kosovo and Serbia – Edi Rama, Zdravko Krivokapić, Zoran Zaev, Albin Kurti and Ana Brnabić, and the Chairman of the Council of Ministers of BiH Zoran Tegeltija.

Merkel said that important infrastructure projects and climate change were discussed and that the discussion was constructive. She also held bilateral meeting with the Prime Ministers.

According to the press release of the Government of North Macedonia, Prime Minister Zaev also referred to the Open Balkans initiative, which he underlined was based on the principles of functioning of the European Union.

“We need to resolve the political obstacles as soon as possible and integrate North Macedonia into the EU. We have successfully done our homework, but that does not mean that we stop here, on the contrary, we work every day and fight for a better tomorrow for our citizens,” said Prime Minister Zaev at a bilateral meeting with Chancellor Merkel.

Prime Minister of Kosovo Albin Kurti, on the other hand, said that during the meeting he had with Chancellor Merkel, Kosovo was not asked to join the Open Balkan initiative, Gazeta Express reports.

Kosovo PM said that no regional initiative can be successful without European Union’s involvement. Kurti has also commented the statements of Albanian PM Rama who during the joint press conference with Chancellor Merkel said that Kosovo is “spreading conspiracy theories” by refusing to join the Open Balkan.

Exit reported that a controversy arose as Enis Recica, a journalist with Klan Kosovo, claimed that journalists from six different Kosovo media waited for 40 minutes to be given a chance to ask questions at Merkel-Rama press conference, but were never given permission to do so. They noted that the journalists were all accredited and appeared in person. Journalists said they were not allowed to ask any questions to either Rama or Merkel.

The mistreatment of the journalists was condemned by Ricardo Gutierrez, Secretary-General of the European Federation of Journalists. He condemned the “outrageous segregation” imposed by Rama against them. He added that EFJ, Europe’s largest journalistic organization, condemned the act.

Várhelyi: EU to intensify cooperation with the Western Balkans