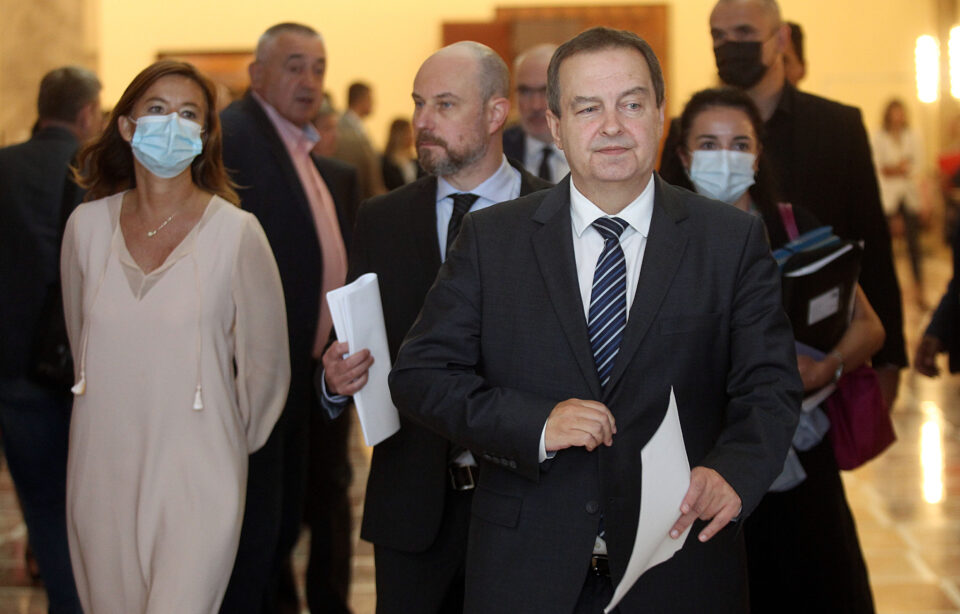 BELGRADE – The second meeting of the Inter-Party Dialogue in Serbia facilitated by the European Parliament took place on 17 and 18 September, resulting in the working document of 16 measures aimed at improving the electoral conditions, which was released to the public on Saturday.

All opposition parties participating in the process, most of which boycotted the 2020 parliamentary elections, took part in the first session of the dialogue on Friday. However, a group of opposition parties left the Dialogue after the session, claiming that the ruling parties were unwilling to accept any measures that would meaningfully improve the media scene or the integrity of the electoral process.

On Saturday, after the working document accepted by the ruling parties was announced, opposition parties that remained in the Dialogue reacted mostly negatively, claiming that the electoral conditions will remain unfair.

The ruling parties announced earlier that the snap parliamentary election will probably be held together with the presidential and Belgrade elections on 3 April 2022. One of the opposition’s requests was for the elections to be held separately.

Inter-Party Dialogue in Serbia began in 2019 and continued after the 2020 election which produced a parliament without a viable opposition.

European Parliament: The document is a step forward

The document was agreed on by the five co-facilitators of the process, Ivica Dačić, Speaker of the Narodna Skupština, Members of the European Parliament Tanja Fajon and Vladimír Bilčík, as well as former Members Eduard Kukan and Knut Fleckenstein.

According to the press release of the European Parliament Democracy Support and Election Coordination Group, the working document contains 16 concrete and implementable measures. Among the various agreed improvements are: the establishment of a temporary supervisory body in the field of media monitoring, which will include representatives of the ruling and opposition parties (three each) and six members nominated by the Regulatory Authority for Electronic Media; the adoption of a binding rulebook for the national public broadcaster; a temporary change of the standing composition of the Republic Electoral Commission, by adding six additional members from the overall opposition in the country.

“These measures constitute concrete steps towards a more level playing field in Serbian politics, and could increase trust and confidence in the electoral process. Also, the agreement reached among the co-facilitators underpins Serbia’s commitment on its path towards EU Membership”, the press release concludes.

In a press conference on Saturday, after the final session, European Parliament Rapporteur for Serbia and one of the co-facilitators of the process Vladimír Bilčík said that the document was a step forward and that he hoped that the participants would be engaged in the implementation of the measures from that document, although he understood that not everyone was completely satisfied with it.

“The document will be available to you, it was proposed by the co-facilitators, and we would like to invite everyone who participated in the Inter-Party dialogue to actively work on the implementation of the content of this document. We believe that this is a very important step forward and that it would be good for everyone to work on it”, he said, N1 reported.

He announced that the EP would continue to monitor the implementation of the measures of this process and that the MEPs are ready to return to Serbia because of that.

President of the Party of Freedom and Justice, Dragan Đilas, stated that the proposal of an agreement, which his party drafted with five other partners, including DS and PSG, and sent before the session, was not accepted.

“We demanded that the agreement signed by the six parties be on the agenda today, so that we don’t waste any more time. This is all a big farce, the Serbian Progressive Party (SNS) says all the time that the election conditions are ideal here, according to them, RTS is a public service, the opposition has the presence it should have, there is no pressure on people”, Đilas said, N1 reports.

A statement issued by the Free Citizens Movement went along similar lines.

“We participated in the dialogue with the best intentions, despite numerous obstructions by the regime, believing that our responsibility dictates that we contribute in every possible way to the normalization of political life in Serbia. Unfortunately, the government has shown that it does not want to participate in that,” the statement reads.

On Saturday, following the agreement on 16 measures, reactions from the opposition were mostly negative.

Nebojša Zelenović, leader of the Together for Serbia Party, stated that the proposal for improving the election conditions does not contain anything that was proposed by the opposition and that the government “does not allow fair elections”.

He said that his party did not agree to “in any way” support the document, because “there is nothing in the conclusions that can improve the election conditions”, N1 reports.

The Vice President of the People’s Party, Miroslav Aleksić, stated that his party could not accept the proposed document.

“Very little or almost nothing of what we proposed was found in the draft document. We could not accept such a document because it is more cosmetics than essence”, said Aleksić.

The president of right-wing Dveri, Boško Obradović, said that the paper was not an agreement with the opposition, but exclusively between the authorities and European MPs.

“The opposition did not get a specific place in the control of the future process, and only in that way can we influence the improvement of the election conditions”, Obradović emphasised.

On the other hand, the president of the Social Democratic Party, Boris Tadić, stated that his party would participate in the work of parliamentary and supervisory bodies.

Tadić said that the platform that was adopted “does not mean that the election conditions are ideal now”, and added that the government can violate even the best platform.

Following the release of the proposed measures, Director of the Centre for Research, Transparency and Accountability (CRTA) Raša Nedeljkov warned that the document presented by the European Parliament offered “even worse conditions than the existing legal norms in Serbia, and that the consequence of that could be an even more non-transparent election process than before the dialogue.

“With the additional blurring of the problem, the institutions will do their job less, because they will not be forced to do their job by additional legal obligations. We are afraid that this will lead to the fact that we will at least have an equally bad election process as 2020, if not worse”, Nedeljkov said.

Bureau for Social Research (BIRODI) Director Zoran Gavrilović assessed in the analysis of the working document that the biggest “profiteers” of the proposed solutions are the President of Serbia and SNS leader Aleksandar Vučić and Regulatory Authority for Electronic Media (REM), while citizens and democracy are on the side of those who did not profit.

The director of BIRODI assessed that the proposed establishment of the temporary supervisory Body is a recognition that REM no longer performs its competence defined by the Law on Electronic Media, which it performed until the parliamentary elections in 2014, N1 reports.

“The authors of the Draft therefore proposed the formation of a copy of REM, which overlaps with the parliamentary Supervisory Board, a body whose competencies and composition are regulated by the Law on the Election of Deputies. Thus, in addition to two (non-functional) bodies, a third was created! What will happen when different decisions or opinions are made about the same thing remains to be seen”, warned Gavrilović in the analysis published on the official website of BIRODI.

He also noted that the attached draft contains no information about the intention to change Article 50 of the Law on Prevention of Corruption, which would deprive the President of the Republic of abusing public resources, i.e. to have the right to use his office for campaigning both during and outside the election period.

“In short, the mechanisms of Aleksandar Vučić’s personal power were not the topic of the Draft,” Gavrilović pointed out.