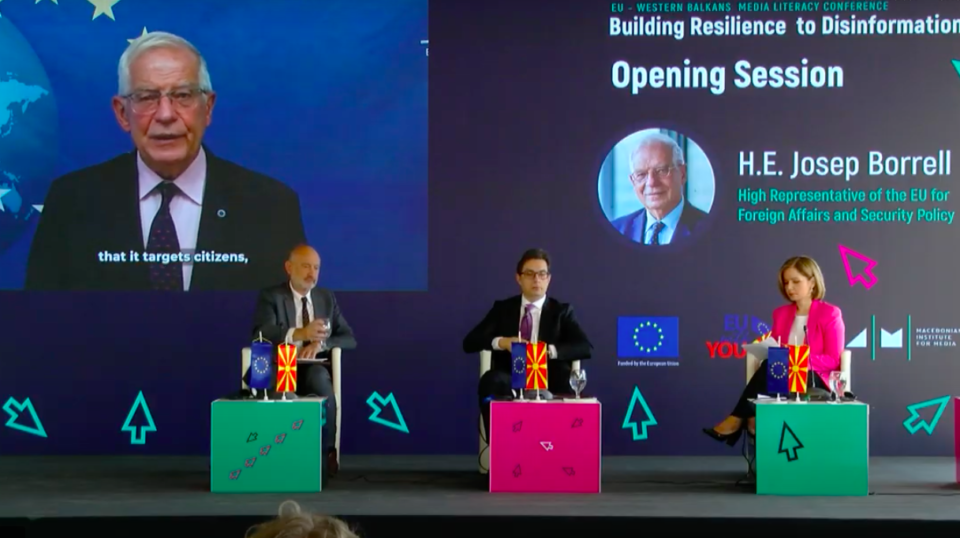 Josep Borrell, David Geer and Stevo Pendarovski at the opening of the Conference; Photo: YouTube Screenshot

SKOPJE – Disinformation campaigns in the Western Balkans are primarily spreading anti-Western narratives and the EU is determined to counter them, but it needs help from the region, stressed the participants of today’s EU-Western Balkans Media Literacy Conference in Skopje. On the other hand, “Building Resilience to Disinformation”, as the Conference is called, is the problem faced by the entire Europe.

This is a second conference of this scope supported by the European Union. The conference in Skopje is building upon the results of the first EU-Western Balkan Media Literacy Conference organised in 2020 in Sarajevo and Banja Luka. It will result with recommendations aimed to encourage effective actions against disinformation and further development of the media literacy.

The event is also registered on the platform of the Conference on the Future of Europe.

President of North Macedonia Stevo Pendarovski opened the Conference by pointing out that the experience so far shows that disinformation on the internet is usually not spontaneous.

“The intention is to manipulate the public in a systemic matter and serve the interests of particular political and business centres of power”, Pendarovski said.

He warned that disinformation campaigns polarise societies and erode trust in the public institutions and that they can destabilise the country as a whole. Among the solutions are education about media literacy, better conditions for professional journalists and better implementation of the current regulations and its improvement in line with the European standards.

Hugh Representative of the Union for Foreign Affairs and Security Policy Josep Borrell stressed in his remarks that this Conference was an annual highlight of EU’s work with the civil society in countering disinformation in the Western Balkans.

“Fact-checkers, independent media and citizens of the Western Balkans are working tirelessly towards this goal”, Borrell said.

He pointed out that the EU was financing studies, education and activities such as workshops, in order to contribute to this goal in the region.

“But it cannot do it alone. Dealing with disinformation requires whole-of-government approach that facilitates whole-of-society approach. There is no doubt on the EU side: Western Balkans are a heart of Europe and we share a responsibility of building a more peaceful, prosperous and united Europe. And we also share the responsibility of communicating about it”, Borrell said.

“Disinformation narratives come in different forms. For example, during the pandemic, we have always seen that the EU has left the region behind. In reality, it has provided unprecedented aid in the form of 3,3bn Euros of health and socio-economic support and Economic and Investment Plan”, Geer said.

He reiterated the message that the EU was determined to countering disinformation, but needs cooperation from the region.

During the first panel disucssion, Rosana Aleksoska from the Citizens Association “MOST” presented the preliminary findings of study on dominant disinformation narratives in North Macedonia in 2020.

The narratives centred around COVID-19, spreading conspiracy theories about the origin of the virus, but also pushed anti-EU, anti-NATO and anti-Prespa Agreement stories.

“A common characteristic of all these narratives is an anti-Western sentiment and undermining of some of the strategic goals of the countries”, Aleksoska said.

The research has shown that the local portals, established as well as anonymous ones, disseminated their content through dozens of Facebook groups with more than a million followers in total. News on assistance from China during the pandemic were especially amplified.

Marjan Zabrcanec, National Coordinator for Strategic Communications and Implementation of the Communication Strategy of the Government of North Macedonia, said that he did not think that the government efforts should focus on removal of the sources, because they are not responsible for them.

“Our efforts should be focused on analysis, deep understanding of the problem and providing counter-narratives”, Zabrcanec said.

He emphasised the importance of an active governance, which is ready to introduce media literacy, in addition to the active transparency.

“That means responding rapidly to the needs of the media, when they request fact verification”, he said.

Zabrcanec said that the government was aware that there are some challenges, that not all institutions are equally transparent and fast, but that it was important that there is a central management regarding the topic of responsiveness.

Klodiana Kapo, Director of the Fact Checking Service “Faktoje” from Albania and Evita Purina, Editor of “Re: Check”, Fact-Checking and Social Media Research Lab of Re:Baltica from Latvia shared their experiences of dealing with disinformation, pointing out that the situation is similar in different countries, whether they are in the Balkans or not.

Deirdre Kevin, Expert of EU-CoE Horizontal Facility II: Freedom of expression and freedom of media in North Macedonia reminded that North Macedonia, as a candidate country for EU membership, must ensure the stability of institutions guaranteeing democracy, which is becoming more and more connected with resilience to disinformation.

Kevin assessed that everybody in Europe was struggling with these issues and that the situation was made worse with the COVID-19 pandemic.

“Western Balkans is not an exception when it comes to disinformation, but as long as people are trying to sort out the problem, we have a chance to win this battle”, moderator of the panel Jasna Jelišić concluded.

Kosovo and Serbia chief negotiators to meet in Brussels this week

“Western Balkans Discuss the Future of Europe!”: Conference in Pristina on Friday