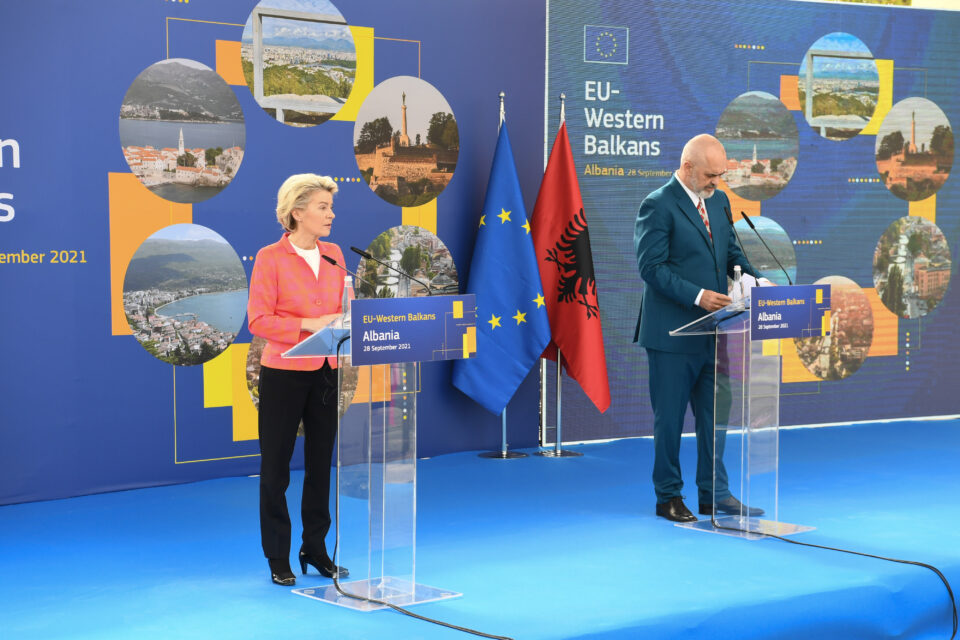 TIRANA – President of the European Commission Ursula von der Leyen and Prime Minister of Albania Edi Rama were asked multiple questions on the Open Balkan initiative and how it relates to the Berlin Process during the joint press conference held today in Tirana.

The conference was held in the context of von der Leyen’s visit to the region, which started today.

The same issue was already discussed during the visit of the outgoing German Chancellor Angela Merkel earlier this month.

EC President was first asked whether she believed that Open Balkan initiative is a way of stabilising the region, or a way for the region to be even more distanced from the EU.

“If we look at the economic progress and building up a Common Regional Market, the Berlin Process is the framework in which we are working and it is the process that is driving this integration forward to the benefit of all six Western Balkan countries “, von der Leyen said.

She said that any initiative, that is within the Berlin Process and that is inclusive and cooperative, is welcomed.

“So, we should not be too much picky on different words, but on content that is proposed. And an open process, an inclusive process that is inviting everyone in to deepen the ties, improving the cooperation between different economies and have a really deep integration of the economies is within the Berlin Process”, von der Leyen said.

President of the European Commission was then asked directly whether the EU supported the Open Balkans or the Berlin Process.

Von der Leyen responded that the Berlin Process had been started so that there was an ownership in the region to integrate the common market.

“And this is absolutely right and you have my commitment also to push this Berlin Process forward. Within the Berlin Process there can be initiatives, as long as they are inclusive, as long as they honour the goal of more regional market integration. They have to be forward-looking, they have to be honouring the goals we have. Then there is my full support”, von der Leyen said.

Edi Rama was asked why was there a need for a second process to speed up a first, when Albania channel all the energy and resources into the Berlin Process.

“I don’t know how many times I have to reiterate it, but I will reiterate it for as long as it takes. There is no second process which is competing against the first or even less so, goes against the first… We do not have to deal with two processes here. The only difference is that the Berlin Process is led by our friends and partners who have thousands and one problems of their own and actually don’t wake up with the question of how the Berlin Process is proceeding… But we are here, and when we are waking up in the morning, we are wondering how our economy is doing today, how our trade is doing today. These are the questions we pose ourselves”, Rama said.

It means, he said, that on all the principles and courses set by the Berlin Process, the region can build upon, move ahead and deliver de facto what is said and declared once a year when there is a Berlin Process summit.

“We go from summit to summit without progress. We have the same high statements when it comes to the principles. But, slowly, we have eight years since the process started, we still have walls with non-tariff barriers, we still do not have in place unified documents for exporters so that they do not wait at the borders for hours or even days at times. We still have in place rather diverse regimes of trades from one country to the other. Open Balkans is open to everyone. Whoever wants, can come in. Who does not want to come in can do that, but cannot hold us hostage. The Berlin Process has got this issue of being a hostage to consensus”, Rama stressed.

Hahn: Brussels has underestimated the influence of China in Balkans