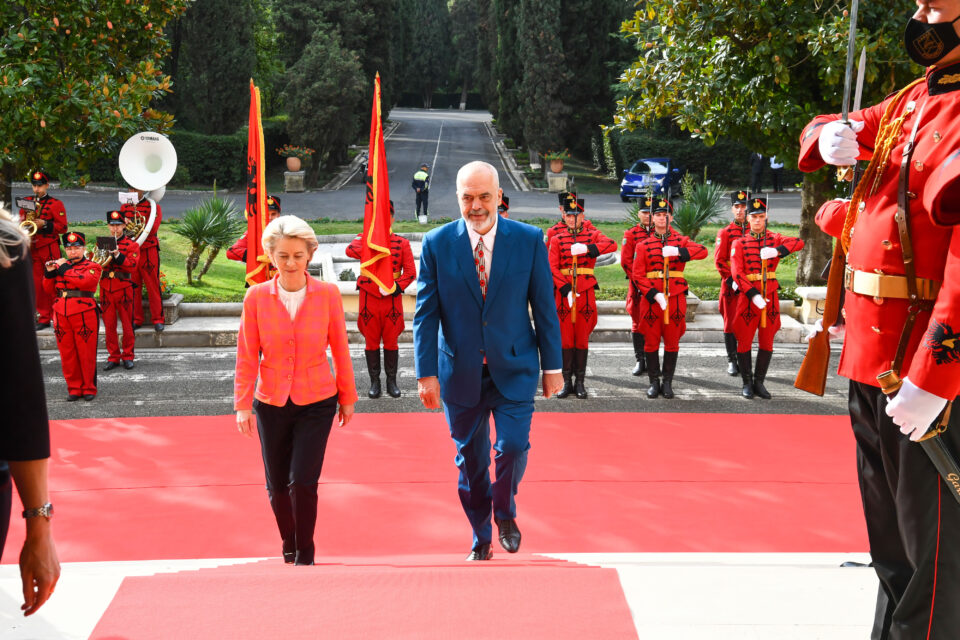 TIRANA – President of the European Commission Ursula von der Leyen has arrived to Albania, kicking off her three-day visit to all six Western Balkan countries.

Von der Leyen is visiting the region ahead of the EU-Western Balkans Summit on 6 October.

The President started her trip in Tirana, on Tuesday morning, where she was received by Prime Minister Edi Rama, and President Ilir Meta.

According to the press release of the European Commission, together with the Prime Minister Edi Rama, von der Leyen will attend the inauguration of the ‘Korb Muça School and Europa Kindergarten’, which was rebuilt with EU funds under the EU4Schools programme after the devastating 2019 earthquake.

On Tuesday afternoon, she will travel to Skopje, where she will meet Prime Minister Zoran Zaev, as well as President Stevo Pendarovski, followed by a visit to a youth cultural centre, together with Prime Minister Zaev.

On Wednesday morning, President von der Leyen will be in Pristina, where she will meet with President Vjosa Osmani and Prime Minister Albin Kurti. She will also visit the Cicërimat Kindergarten, which was built with EU funds, together with the Prime Minister.

The President will then travel to Podgorica, where she will be received by President Milo Đukanović and Prime Minister Zdravko Krivokapić. During her stay, she will visit the Institute of Public Health which received EU support in the fight against the pandemic, accompanied by the Prime Minister.

Then, the President will arrive in Belgrade, Serbia, where she will meet President Aleksandar Vučić on Wednesday and Prime Minister Ana Brnabić on Thursday. On Thursday morning, together with President Vučić, President von der Leyen will take part in the launch event of a project on railway Corridor X. The President will also witness the signing of a contract for the rehabilitation of a section on the Peace Highway which the EU is supporting, Commission announced.