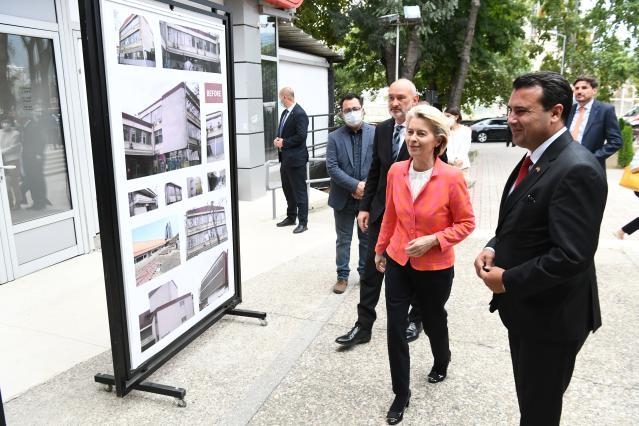 TIRANA / SKOPJE – President of European Commission Ursula von der Leyen started her Western Balkan tour today with visits to Tirana and Skopje, where she stressed that the Commission was working hard on moving the countries’ EU accession process forward.

In Tirana, von der Leyen was received by President Ilir Meta and Prime Miniser Edi Rama. Together with Rama, von der Leyen attended the inauguration of the ‘Korb Muça School and Europa Kindergarten’, which was rebuilt with EU funds after the 2019 earthquake.

I’m so glad to inaugurate the Korb Muça School and Europa Kindergarten.

The EU helped rebuild it after the devastating earthquake of November 2019.

It is a beautiful symbol of the enduring friendship between the EU and Albania, and of our common future. pic.twitter.com/5UlvDwlQWC

In a joint press conference with PM Rama, President of the European Commission said that Albania had delivered and deserved to move forward with the accession process.

“Albania has clearly delivered all that we have been asking for. And I know you have come a long way. That was a difficult process. You put an enormous effort in it. You were successful. You are successful. So I really commend you on that. And now it is us who have to deliver. We are starting the first Intergovernmental Conference, I am aware of that. So we are working hard on our side, and I think we owe it to all these young people who believe in a European future, who see themselves, of course, as Europeans in their lives”. von der Leyen said.

She reminded that the EU donated over 450,000 doses to Albania and that the country had received EUR 230 million in grants and financing to help deal with the consequences of the pandemic.

She also said that she stood fully behind the Berlin Process.

“I say that because the speedier the process, the speedier the EU accession process too. Because, as I said, Albania belongs in the European Union. And there is no question about it. I fully support moving forward on the accession negotiations with Albania and North Macedonia as soon as possible”, she added.

She reflected on the current rising tensions between Kosovo and Serbia, which she described as very concerning and worrying.

“It is essential to lower the tension and to return to the dialogue”, von der Leyen said.

After visiting Albania, the president of the European Commission, arrived in Skopje, where she was welcomed at the airport by Deputy Prime Minister for European Affairs Nikola Dimitrov. She met with Prime Minister Zoran Zaev and President Stevo Pendarovski, and also visited the Youth Cultural Centre.

I was delighted to visit the Youth Cultural Centre.

The EU is proud and happy to provide them with employment and education support.⁰
I say to all those young people: your future will be European. pic.twitter.com/z8z6KH261U

During the press conference with Zoran Zaev, von der Leyen sent the messages along similar lines.

“Indeed, the future of North Macedonia is in the European Union. We want you by our side. And the European Commission and me, myself, we are firmly standing by this commitment. You can rely on us. You have made outstanding progress and taken courageous decisions. And I really want to commend you for that, I want to praise you for that. And I want to be very clear, now it is for the European Union to deliver”, von der Leyen said.

She also reminded that EU donated 275,000 vaccine doses to North Macedonia and 220 million EUR in grants and financing.

Lajčák meets with Bislimi and Petković, discussions to continue throughout the day