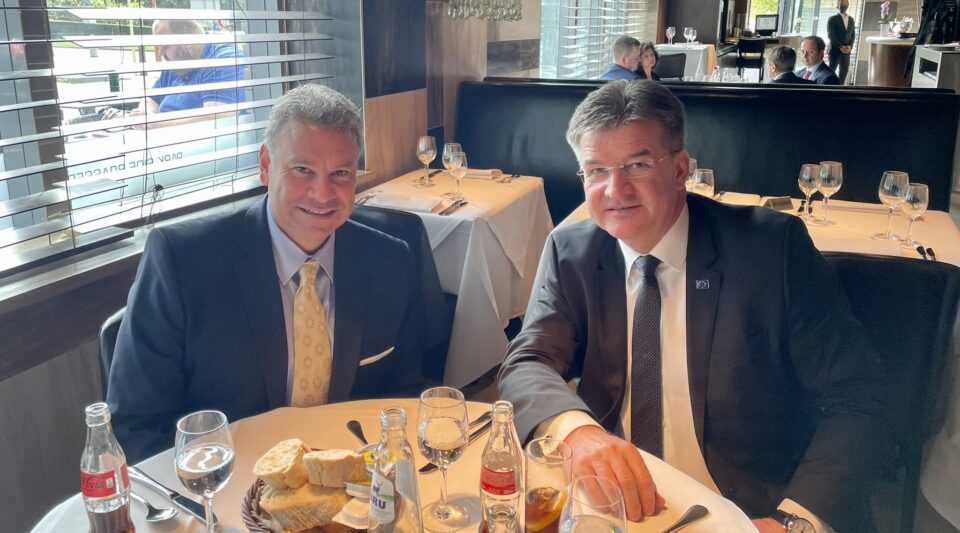 BRUSSELS – Special Representative of the European Union for the Belgrade-Pristina Dialogue Miroslav Lajčák tweeted today that an agreement was reached between Kosovo and Serbia after two days of intensive negotiations on de-escalation.

“I thank Besnik Bislimi and Petar Petković for their readiness to negotiate and agree for the good of the people,” Lajčák wrote, with a photo of the document.

The document states that the special police units, which are now in Jarinje and Brnjak, will withdraw with the removal of the barricades, starting on 2 October at 8 am, and no later than 4 pm on the same day. KFOR units will be deployed in Jarinje and Brnjak before the start of the withdrawal and will remain for about two weeks, in order to maintain a safe and secure environment and freedom of movement, the text adds.

We have a deal! After two days of intense negotiations, an agreement on de-escalation and the way forward has just been reached. I thank Besnik Bislimi and Petar Petkovic for their readiness to negotiate and agree for the good of the people. pic.twitter.com/OuhuUWvuG0

The second point of the agreement states that the sticker regime will start to be applied from 4 October  at 8 am, as agreed in the dialogue with the mediation of the EU, and that will be a temporary measure until a permanent solution is agreed.

The third point of the agreement states that a Working Group will be formed, consisting of representatives of the EU, Belgrade and Pristina, chaired by the EU, in order to find a permanent solution for license plates based on EU standards and practice. The first meeting of that working group will be held on 21 October in Brussels, and within six months, the working group should present its findings for a permanent solution at a high-format meeting in Dialogue.

In a later tweet, Lajčák thanked US Deputy Assistant Secretary of State Gabriel Escobar, who he said had spent his last days in Brussels, supporting the Dialogue.

“EU-US unity is key for success in the Western Balkans”, Lajčák tweeted.

“Western Balkans Discuss the Future of Europe!”: Conference in Pristina on Friday

Conference on Belgrade-Pristina dialogue to be held Oct 20