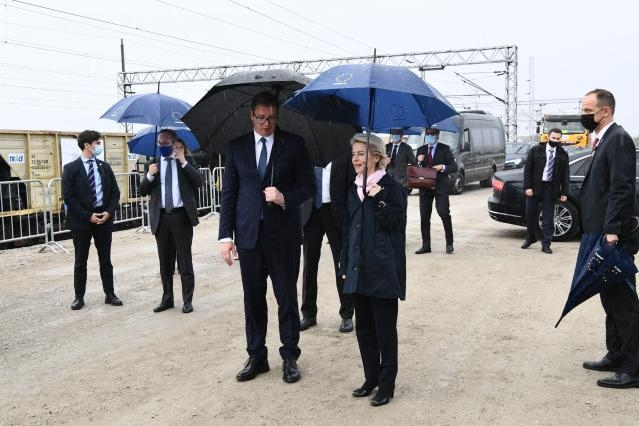 BELGRADE / SARAJEVO  – During the final day of her visit to the Western Balkans, von der Leyen participated in a ceremony of a reconstruction of a railway section in the city of Niš, Serbia, before visiting Bosnia and Herzegovina.

President of the European Commission and President of Serbia Aleksandar Vučić visited Niš for a ceremony marking the start of reconstruction of a railway section on the International Rail Corridor X and the signing of a contract to build a highway section.

At the event, the current situation regarding Kosovo-Serbia relations were discussed. Vučić said that the Belgrade-Pristina dialogue was the foundation for negotiations from the start, adding that Serbia is committed to the dialogue, N1 reports.

“Any kind of destabilization, problems even if they aren’t big, create a huge problem for all of us in terms of attracting investors and the country’s image. It’s in our interest to try to advance our economy and work on rule of law,” he said.

Vučić said that Serbia won’t become a member of the European Union before it resolves its relations with Pristina but warned that a lot remains to be done on other fields as well.

The European Commission President said that Serbia’s better future lies in the EU but warned that a lot of work remains to done on that path, including getting through the pandemic and stimulating economic recovery.

Von der Leyen’s final visit was to Bosnia and Herzegovina, where she met with the country’s Presidency members.

Earlier, von der Leyen opened a bridge Svilaj on river Sava, a new border crossing between Bosnia and Herzegovina and Croatia. The ceremony was also attended by the Prime Minister of Croatia Andrej Plenković.

An honour to inaugurate the Svilaj Bridge today.

It symbolises the very essence of the European project.

Building bridges between people, countries and cultures, for our common future.

Because Bosnia and Herzegovina, and all of the Western Balkans, belong in the EU. pic.twitter.com/fGy223P0vz

Von der Leyen also commented on Reuters article announcing that the EU cannot guarantee membership for the six Balkan countries. Answering the question whether this means that Brussels has given up on EU enlargement, von der Leyen replied that her visit to the region was undertaken solely for the European perspective and to be there to encourage the countries of the Western Balkans, N1 reported.

“The Western Balkans have a place in the EU. It is in our common interest, but I believe that it is also our destiny,” she said.

Speaking about BiH’s progress, she stressed the need for “urgent progress in electoral and constitutional reforms”.

Kosovo and Serbia agree to a sticker regime, withdrawal of police, removal of roadblocks