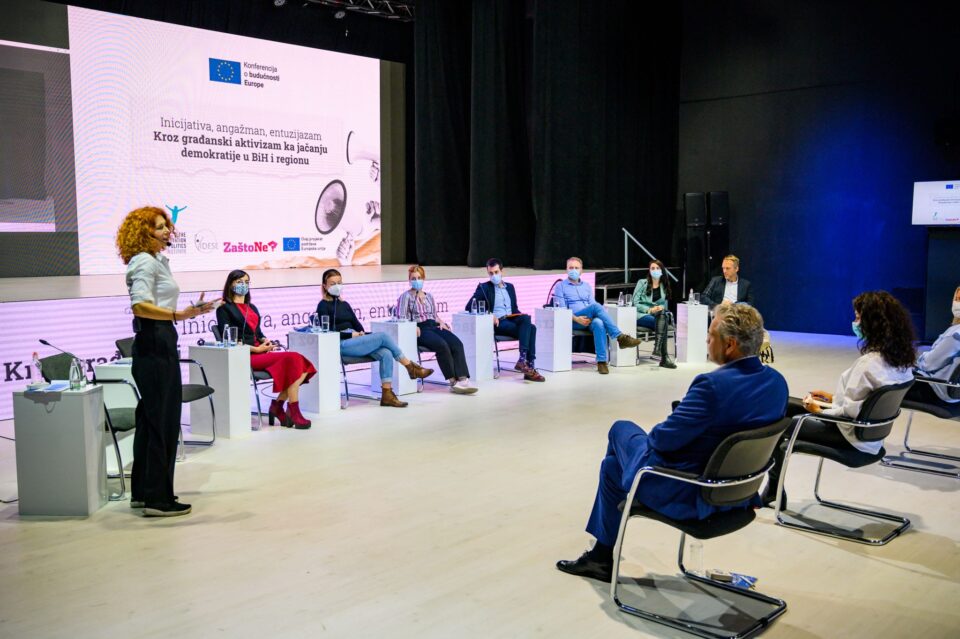 SARAJEVO – Achievements of civil society in Bosnia and Herzegovina and the Western Balkans, but also the debate on whether civic initiatives should be directly involved in politics, were in focus of the Conference “Initiative, Engagement, Enthusiasm – Strengthening Democracy in BiH and the Region through Civic Activism” held in Sarajevo today.

In his introductory remarks, Ambassador Johann Sattler, Head of the EU Delegation to BiH, reminded that this Conference is a contribution of BiH to the Conference on the Future of Europe, emphasising that this pan-European initiative is intended primarily for citizens and civil society.

“The EU and the Western Balkans share the same continent and the same problems. European officials, including the President of the European Commission, have repeatedly said that the future of the region lies in the EU, and that is why it is natural for the region to get involved in the conversation about our common future,” Sattler pointed out.

Panelists, civic activists from BiH, spoke about their experience in this field.

Emina Veljović, Executive Director of the Aarhus Centre in BiH, pointed out that the primary focus of her organisation was to promote the Aarhus Convention on Access to Information, Public Participation in Decision-making and Access to Justice in Environmental Matters and its adequate implementation in BiH. Recently, the Centre has been involved in all cases of illegal construction of small hydropower plants.

“In 2019, a regional summit was held where the Declaration on the Protection of Rivers of the Western Balkans was adopted, because the construction of small hydropower plants affects the entire region, in the document we said a clear “no” to these facilities. The House of Representatives of the Federation of Bosnia and Herzegovina adopted this declaration in 2020, and the National Assembly of the Republika Srpska in 2021″, said Veljović.

Milica Pralica, President of the “Opšta nula” Association from Banja Luka, pointed out that its activists were often targeted by the media, which discouraged people from getting involved, but that now citizens are starting to open up more, especially about topics that unite them, such as are environmental themes, Justice for David and Justice for Dženan movements, because these issues touch people on a personal level.

Merisa Okanović, President of the Youth Movement Revolt from Tuzla, said that the organisation was created as a student movement against increasing tuition fees, and later the implementation of the Bologna system, and that after that activities became more structured, that work began on public dialogue, monitoring local and cantonal authorities in the field of higher education.

Gordan Bosanac from the Croatian party Možemo joined the discussion, talking about the transition from activism to politics.

“We were waiting for parties that we could vote for with enthusiasm, so in the end we decided that it would be us. We are still balancing between activism and politics – we have one foot in the street and other in the institutions. We have the feeling that we have to be on the street, and in that we have an advantage over other parties. Dominant parties often try to discriminate against us because we are activists and allegedly not ready for politics, but citizens actually appreciate activism and that is an advantage,” he said.

He added that the work that Možemo member had done in the parliament brought access to the media, through which they managed to spread their ideas in a way that was not possible through activism.

Dobrica Veselinović, a representative of the Serbian Ne da(vi)mo Beograd movement, pointed out that the motives for the members of this movement to enter politics were similar to the members of Možemo.

“The thing that prompted us to engage is that we felt betrayed by political elites and we had nobody to vote for. That path is very uncertain, but I would look at it not from the context of the election results, but what needs to be done in the future”, Veselinović said.

He added that environmental issues need addressed in the region, primarily the problem of using coal in electricity production, as well as demilitarisation of the region, democratisation of public institutions and “a serious exchange of people” in the Western Balkans, which would contribute to the region living together again.

Veselinović added that, in the context of media capture in Serbia, there is no other channel of communication than talking directly to people and doing the field work.

The exchange on whether activists should enter politics continued later on during the panel, with Emina Veljović expressing her opinion that this was a mistake, because once civic organisations step into a political party, they have to accept their ideas, and lose the “thread, freedom, activism”.

Dobrica Veselinović, on the other hand, said that the activists are on the defensive and are trying to defend the already existing rights, and are unable to expand them.

“That is why I think it is necessary to take over power in the places where power originates – and that is politics,” said Veselinović.

Sofija Todorović, a journalist at BIRN, pointed out that, despite the bad circumstances in the region, standards of the civil society and the media should remain the same.

“We should not lose focus and strategic approach to solving the problem. Somehow it has come to the point that everything has to be done now and immediately – if the result is not produced immediately, the idea is abandoned”, she said, adding that young people who become activists are often promised more than it can be provided to them, which often leads to frustration and disappointment.

Srđan Perić from the Podgorica-based organization KOD commented on the relationship between civic activism and politics in Montenegro. He said that during the last year’s change of government in that country, there was a great participation of people from the civil society, but that, a year later, the expectations had not been met.

“Some people from the civil sector have entered the new government and that’s fine, but now a whole space has opened up for a critical look at the civil sector itself, and you can only point to what you’ve been doing so far”, he said, adding that his view was that, in today’s circumstances, there is no clear line between civil society, the media, political parties and the economy.

The moderator of the panel, Senada Šelo Šabić, pointed out that there was not much talk about the international community, unlike in previous years, when the inevitable topics were opportunities to obtain funding and similar issues. It is a sign that the civil society is maturing, but all that is happening in a state of apathy and people leaving the region, so it is even more difficult, said Šelo Šabić.