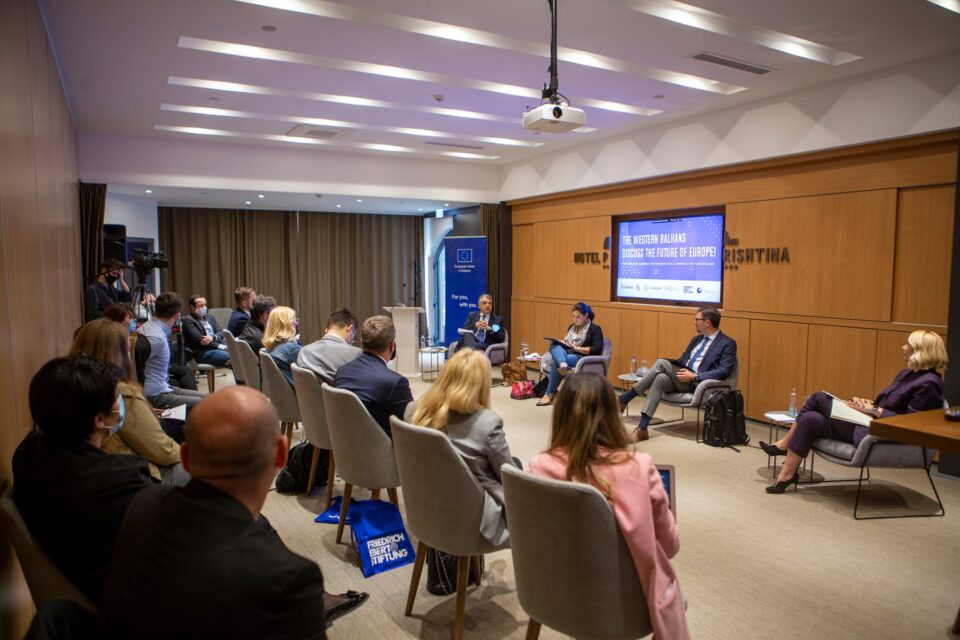 PRISTINA – Even though there is a feeling that the Western Balkans was left out from the Conference for the Future of Europe, the EU cannot afford not to hear the contributions from the region. The Western Balkan countries have an opportunity to demonstrate that they are not focused on a single issue – enlargement – but that they can contribute to the discussions on wider European issues.

These were the conclusions of the Conference “Western Balkans Discuss the Future of Europe!”, which was held in Pristina today. Donika Emini, Director of CiviKos platform and a BiEPAG member, moderated the discussion.

Srđan Majstorović, Chairman of the Governing Board of the Belgrade-based European Policy Centre pointed out that, in general, feeling in the region is that it is always being left out of the mainstream EU processes.

“We have a Balkanocentric perspective – we believe that we are the most important region in the Europe, but we are missing the bigger picture. And the world is changing, the EU is changing, it is discussing how to adapt to post-pandemic, post-Brexit, post-Trumpian world”, Majstorović said.

He said that the Governments in the region often fail to engage with the European issues, which is also the case with Conference in the Future of Europe.

“Not all member states were inviting at the beginning of the Conference. Eventually, the citizens were included through platform like this. And if the governments don’t want to use this opportunity, the citizens should. EU cannot afford not to listen to what is coming from the Balkans”, Majstorović said.

Simonida Kacarska, Director of the European Policy Institute in Skopje, agreed that the region, given its links with the EU, cannot afford not to participate and that some problems, such as environmental issues and air pollution, are obviously shared with the EU.

She reminded that last year, a group of civil society organisations ran a simulation of the conference with the young people in all six Western Balkans states and that the findings were published by the European Policy Centre in Brussels.

“Young people were more than up to the task when it came to the digital transformation, green politics. This would be our starting point. The youth feels that the challenges in the EU are shared. So, the decision not to include the region formally in the process felt as a blow. This makes us feel like an unwanted guest at the table, but we have learned to live with that”, Kacarska said.

She added that North Macedonia, as a result of that 20-year engagement with the EU, in many areas has a better level of alignment with the EU than Serbia and Montenegro.

“From us, the EU can get an input about what are the effects of its external engagement, and lack thereof”, Kacarsak said.

Ioannis Armakolas, Head of the South-East Europe Programme at ELIAMEP, assessed that, unfortunately, EU is not ready enough to listen to the WB when it comes to the Conference for the Future of Europe.

“Somehow I feel that EU policy makers believe that Western Balkans are a too complex problem that they cannot deal with right now”, he said.

Armakolas added that the EU perspective of the Western Balkans is in crisis and that, at the moment, the region is waiting for the EU to say whether it is ready to realistically and credibly accept the Western Balkans. In that context, he said, the participation in the Conference of the Future of Europe has a promising dimension, in that it is not about the accession per se.

“When you are obsessing with only one issue and do not understand that the future policy making is much broader, you are not the good partner. But the Western Balkans through this process can demonstrate that they have ideas about the whole Europe”, he said.

Even If the contributions will not lead to immediate policy inputs, he said, they could shape the agenda, which will eventually lead to the policy outcomes as well. This was the case with the debates on the Constitution for Europe.

When it comes to precise contributions to the Conference, Srđan Majstorović named multiple areas, such as public health, where the dynamic between the region and the EU is already intensive, with many medical workers leaving for EU to work. He also said that the Western Balkans can contribute in trade and security areas, including controlling illegal migrations, and much more work that needs to be done in the fight against organised crime, and corruption.

“We can help EU to re-discover its primary purpose, that EU is a success, that there has been peace for more than 70 years and that it can be more confident in its future global policy”, Majstorović added.

Simonida Kacarska added that a lot of the discussion of rule of law conditionality within the EU is based on the mechanisms it used in its foreign relations, including in the Western Balkans, which is another example of how the region can contribute.

Ioannis Armakolas suggested that the EU should learn from China and Russia why the region is attractive for engagement.

“The EU in the Western Balkans is in the race of its own and it is in a danger of coming second”, he said, quoting a Greek proverb.

The event was opened by Tomáš Szunyog, Head of the EU Office, and the European Union Special Representative in Kosovo. It was a part of the series of events organised by Friedrich Ebert Stiftung Dialogue Southeast Europe in the regional capitals.

“Building Europe Together“: WB contribution to the Conference on the Future of Europe to be discussed on Monday