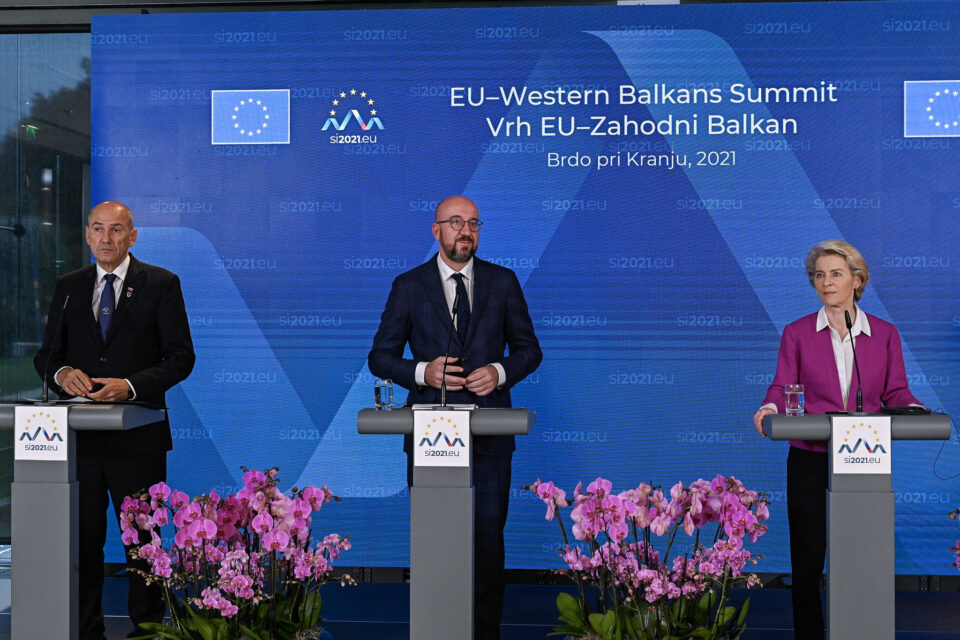 .President of the European Council Charles Michel says that the region has strategic importance for the EU.

According to Michel the fundamental values, rule of law, fight against corruption are in the European DNA. „These should also be the choice for the Western Balkan government“, he said.

He said that this debate was the opportunity for speaking about enlargement, history but also the question of minorities and their treatment in different countries.

President of the Europan Commission Ursula fon der Layen said that Europe is not complete without Western Balkans.

„European Commission’s position is very clear. Western Balkans is a part of same Europe as the European Union. We want the Western Balkan in the EU and there can not be any doubt that our goal is enlargement”, said von der Layen.

She pointed out that she feels the frustrations of ordinary people due to the length of the EU accession process, adding that she fully understands them.“

“Which way forward?” When it comes to reforms, our partners in the Western Balkans are implementing important reforms. Clearly, there is a lot of progress.It is important to stay on that path in key areas such as the rule of law, the fight against corruption, freedom of the media, and economic reform,” she said.She emphasized that the European Union must also do its part. “Especially the lack of a decision to open negotiations with Northern Macedonia and Albania threatens our power in the region. It is important to move forward in that process and clarify the whole process, ” said President of the European Commission.

She mentioned the Economic and Investment Plan and underlined his importance for the Western Balkans and forwarding the Regional Economic Area.

“My second message is that the Economic and Investment Plan is at the heart of our work with the region. With nine billion euros in grants on the table, we can increase support to 30 billion euros for the region. The Economic and Investment Plan is accompanied by the Berlin Process, which is key to stronger integration of the common regional market. Market integration will be beneficial for the Western Balkans as is the common market for the European Union. That is why our focus now is on the development of this common regional market,  “said von der Layen.

Talking about the reforms in the key areas, von der Leyen said that Western Balkan’s partners are not there yet, but they have made much progress and now it is time to stay the course.

Von der Layen announced that the EU had prepared an action plan for a green and innovation agenda and that it had been agreed on a road map for roaming charges between the EU and the Western Balkans.

She said that the latest agreement between Kosovo and Serbia on a license plate was an excellent message for the whole region that is possible to resolve problems if you have a desire for that.

Slovenian Prime Minister Janez Janša assesses that this was a very important event for the EU and the Western Balkans.

Janša said that it was clear that the EU is proving with concrete steps that the Western Balkans are still in the context of the Thessaloniki decision.

He stated that Ljubljana wanted the deadlines related to EU enlargement to be stated in the declaration from today’s EU-Western Balkans Summit, but that this did not happen.

“Many crises followed after that decision, also in the EU itself, which also met delays. Timetable for enlargement is not a part of the declaration, and it is not part of it, but I think that most of EU Member States have shown the will that over the next decade we will focus on the EU membership in the Western Balkans”, Janša said.

According to Janša, reforming the Union, internal reforms in the Western Balkans, and the resolution of bilateral issues are the three processes that need to run in parallel in the next decade.

He assessed that in order to materialize the European perspective of the region, it is necessary for the EU institutions to be more efficient, to resolve open bilateral issues, such as relations between Belgrade and Pristina and Skopje and Sofia, and to continue the negotiation process with Brussels.