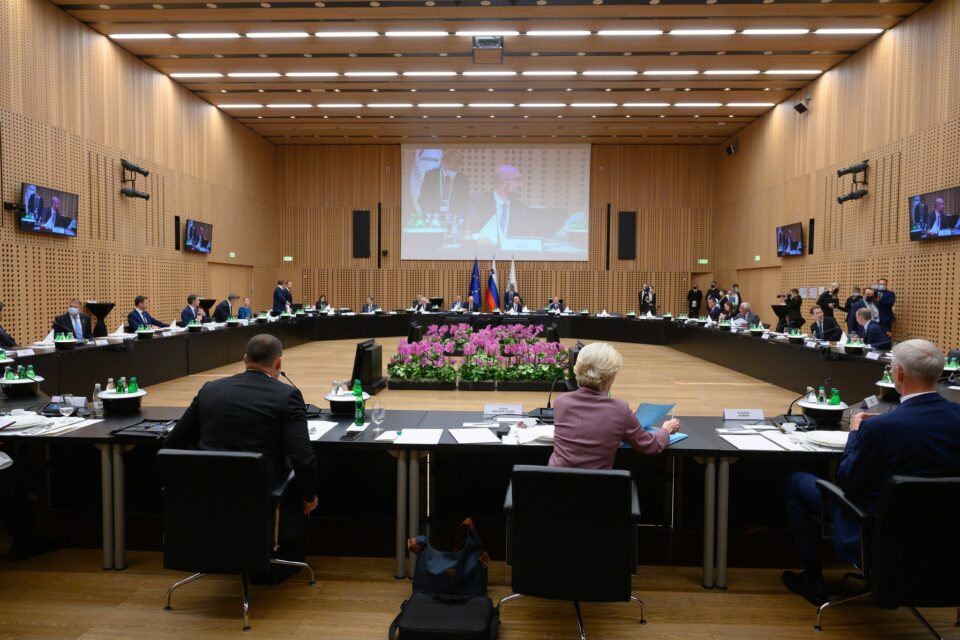 Informal meeting of the members of the European Council, 5 October 2021; Photo: Flickr / Slovenian Presidency of the Council of the EU 2021

16:32 President of Serbia Aleksandar Vučić said that he had discussed recognition of diplomas and qualifications with Prime Minister of Kosovo Albin Kurti. He confirmed that the Dialogue would continue. Vučić and Kurti held a joint meeting with President Macron and Chancellor Merkel during the Summit.

16:24 Prime Minister of North Macedonia Zoran Zaev and the President of Bulgaria, Rumen Radev, expressed the readiness and interest of the two countries to continue the dialogue in order to resolve the disputed issues that block the start of Skopje’s negotiations for membership in the European Union, news agencies report. According to the Government in Skopje, Zaev and Radev stated that at a joint meeting on Brdo near Kranj with the President of France, Emanuel Macron, and the Chancellor of Germany, Angela Merkel. President Rumen Radev said that as long as Bulgarians in Macedonia are subjected to subtle assimilation and their fundamental rights over other nations are suppressed, Bulgaria will not say “yes” to the start of negotiations with the EU.

16:02  German Chancellor Angela Merkel said to the reporters at the Summit that she had rejected calls to set a date for the accession of Western Balkans countries into the European Union, Reuters reported. “I don’t really believe in setting dates, I believe in making good on our promises: Once the conditions are met the accession can take place,” Merkel told the reporters.

15:30 The leaders have adopted the Brdo Declaration, which includes the sentence “the EU reconfirms its commitment to the enlargementprocess and its decisions taken thereon, based upon credible reforms by partners, fair and rigorous conditionality and the principle of own merits”. Read the full declaration here.

14:51 Prime Minister of Slovenia Janez Janša said that it was clear that the EU is proving with concrete steps that the WB are still in the context of the Thessaloniki decision. Many crises followed after that decision, also in the EU itself, which also meant delays, he side. “Timetable for enlargement is not a part of the declaration, but I think that most of EU Member States have shown the will that over the next decade we will focus on the EU membership in the Western Balkans”, Janša said. Reforming the Union, internal reforms in the Western Balkans and the resolution of bilateral issues are the three process that need to run in parallel in the next decade.

14:42  “EU is not complete without the Western Balkans. We want the WB in the EU and there can not be any doubt that our goal is enlargement”, said President of the European Commission Ursula von der Leyen. She highlighted the Economic and Investment Plan and its role and forwarding the Regional Economic Areas.

Talking about the reforms in the key areas, von der Leyen said that “our partners are not there yet, but they have made much progress and now it is time to stay the course”. It was important today to clarify the process to find the key issues in the bilateral topics between Bulgaria and North Macedonia and make sure that there is a roadmap for practical steps, she said.

14:35 President of the European Council Charles Michel started the conference with stressing that fundamental values, rule of law, fight against corruption are in the European DNA. “These should also be the choice for the Western Balkan government” he said. He described the debate as lively and passionate, and concerning the question of minorities and their treatment in different countries.

“There is an ongoing discussion among 27 about our capacity to accept future of Europe, we need to work on that further”, Michel said, adding that, today’s Declaration is dense and substantial.

13:47 PM of Kosovo Albin Kurti tweets about his participation in a meeting of the Party of European Socialists, with PM of Albania Edi Rama also present.

Today, ahead of the #EUWBSummit2021 in Slovenia, I participated in a meeting of the Party of European Socialists and Democrats, @PES_PSE. The focus was on achieving a peaceful European future for the WB. We agreed that the EU enlargement process must be credible & consistent. pic.twitter.com/xs5M95EMlB

13:33 Despite some indications that the press conference might start earlier than scheduled, it is running late. EWB has learned that the negotiations over the text of the Declaration are still ongoing.

12:45 Press conference was scheduled for 13:30 but it might start even earlier.

12:22 Commission releases doorstep remarks of Commissioner Olivér Várhelyi. “We have to take our responsibilities and our decisions that lead us to this. Meaning opening the first Intergovernmental conference with North Macedonia and Albania, meaning opening negotiating clusters with Serbia and start closing with Montenegro, meaning accelerating the work for Bosnia and Herzegovina to become a candidate country, meaning to deliver visa liberalisation to Kosovo”.

12:14 Prime Minister of Greece Kyriakos Mitsotakis met  President of Serbia Aleksandar Vučić on the sidelines of the Summit. The talks, acording to ANA-MPA agency, focused on the latest developments in the region in the context of the Western Balkans’ EU accession perspectives.

11:48 Prime Minister of Kosovo, Albin Kurti, confirmed that during the break of the two sessions at the Summit of the EU – Western Balkans, he will meet with the President of Serbia, Aleksandar Vučić, in the presence of German Chancellor Angela Merkel and French President Emanuel Macron.

10:46 Footage of the family photo has been released by the Council.

10:12 Plenary session to start following the arrival of leaders.

10:05 Plenary session, scheduled for 9:30, will start later as the leaders are still arriving.

10:00 “Today, we have the opportunity to have the Western Balkans Summit, which will be a chance for us to confirm the European perspective of the Western Balkans on the one hand, on the other hand it will also be the opportunity to make clear that we are ready to mobilise a lot of money in order to invest in the countries, but also to support the reforms – the economic reforms, the fight against corruption and reforms to improve governance. We want closer ties with those countries”, President of the European Council Charles Michel stated in his doorstep address.

9:54 In a letter to Council President Charles Michel on the EU-Western Balkans summit that takes place in Slovenia today, European Parliament President David Sassoli urged leaders to overcome the current stalemate and move forward with the accession process.

“This year’s EU – Western Balkans summit could not be more timely. Today, more than ever, the accession process of the countries of the Western Balkans needs a new and strong impetus. It is high time for delays and current blockages to be overcome”, Sassoli wrote.

9:46 Influential daily Delo argues in this mornings commentary that Slovenia’s strong emphasis on the Western Balkans is motivated not just by geostrategic interests but by very tangible interests in the region, in particular strong economic ties, STA reports.

9:30 Leaders are arriving at the conference in Brdo pri Kranju. They are received by Prime Minister of Slovenia Janez Janša and are addressing the media. Plenary session is expected to begin soon.

On Tuesday, 5 October 2021, on the eve of the summit, President of the European Council Charles Michel invited EU leaders to an informal meeting to discuss the EU’s role in the world. The draft conclusions reaffiremd the EU is a staunch supporter of multilateralism (UN, G20, G7, etc.) and a defender of a rules-based international order. It was concluded that the European Union needs to increase its capacity to act autonomously and that High Representative Josep Borrell will put forward a first draft of the Strategic Compass in November 2021.

The European People’s Party’s (EPP) EU and Western Balkan leaders also met in Ljubljana on Tuesday, ahead of the Summit. The leaders adopted the party’s EU-Western Balkans Summit Declaration. In the declaration, EPP reiterated its unequivocal support for a credible enlargement and European Union accession perspective for the Western Balkans.

Party of European Socialists also tweeted yesterday evening that it had held a meeting of its members, including the representatives of the parties from Bosnia and Herzegovina and Serbia.

On the morning of 6 October, ALDE Party also brought together liberal leaders for a meeting ahead of the EU-Western Balkans Summit to discuss European engagement in the region and common priorities.