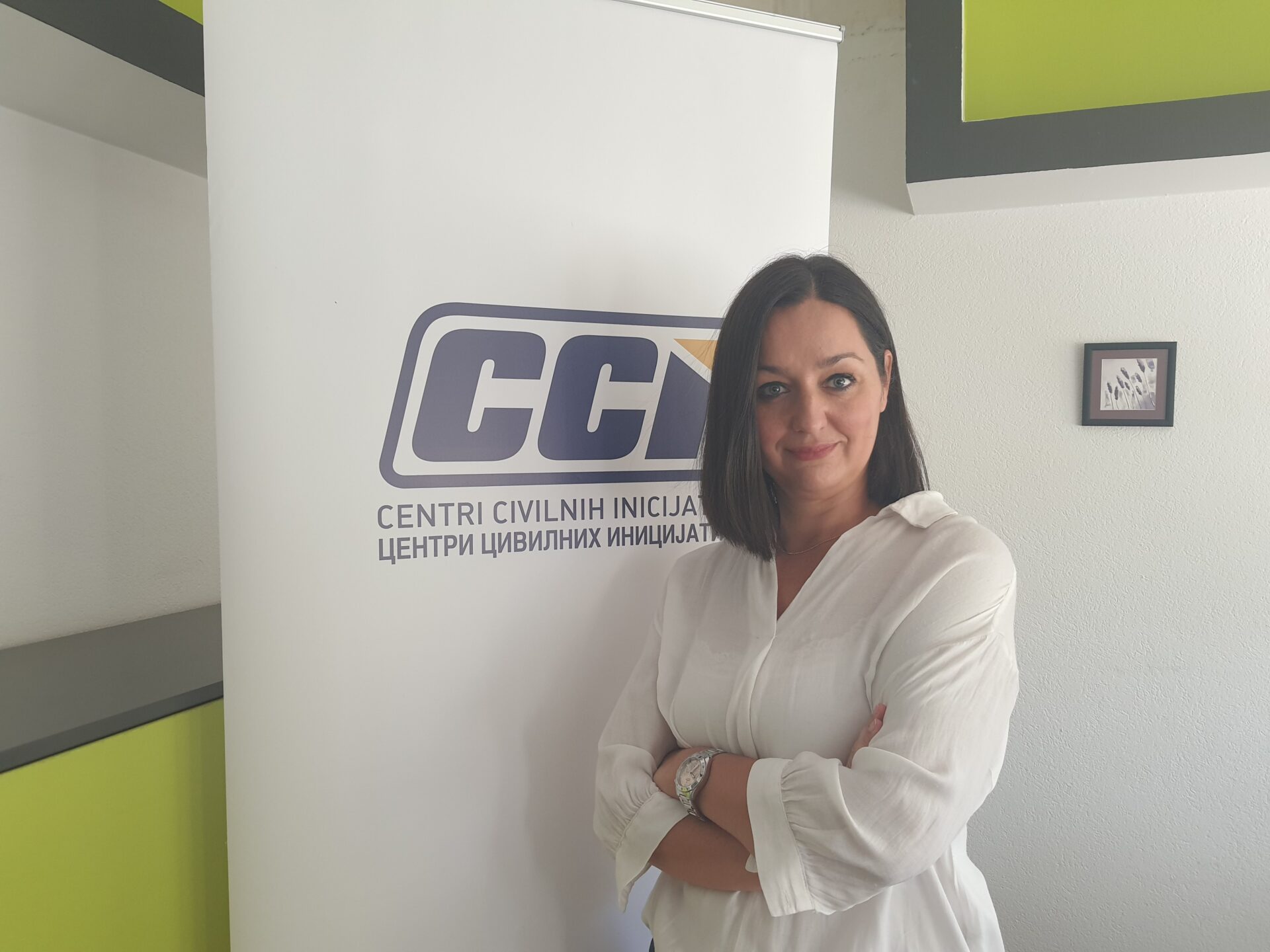 According to Transparency International 2020 Corruption Perception Index, BiH is the lowest ranking Western Balkan country. Corruption remains an important issue, present in different spheres of everyday life. At the same time, citizens distrust in their government’s abilities to fight this problem rises which demands significant anti-corruption efforts. What are the major causes of citizens distrust and widespread corruption in BiH? Does the current legal framework enable combating corruption, and how effective is the institutional framework? On these and other topics we spoke with Jasmila Pašić, Project Manager at Centre for Civic Initiatives.

Jasmila Pašić: I agree that corruption is a significant challenge for the Western Balkans, but in BiH corruption is currently one of the most important problems because it is present in all spheres of our life – education, health care, employment etc. I also have to mention public institutions, where corruption is also present and includes non-transparent public procurement, allocation of funds without criteria, etc. We have to be aware that corruption leads to unemployment and a low standard of living.

I would say that inadequate and vague legislation is one of the causes of corruption, but also the lack of a valid control system. In some cases, we have good laws that are not enforced or no one controls its implementation, but also, no sanctions are applied for violators of the law.

At the same time, the fight against corruption is a long-term process that must involve all actors in the process.

We cannot expect quick solutions to fight against corruption, and we must create an environment in which corruption cannot and must not be an accepted form of behaviour, as it has been in some segments so far.

EWB: CSOs represent a crucial component in every democratic society, and their role in preventing and fighting corruption is considered essential. How do you assess the cooperation between CSOs and the state institutions in Bosnia and Herzegovina regarding the fight against corruption? Do you think that the existing legal mechanism for their collaboration is sufficient? Do you believe the CSOs are recognized sufficiently as relevant actors in the matters of fighting against corruption?

JP: I agree that CSOs are one of the most important components of the fight against corruption, and without their active role, there will certainly be no progress in this area. I have to say that cooperation between governments and CSOs is not at the level we would be satisfied with, and there is still space for improvement. But when we talk about the fight against corruption, I have to mention that in BiH we can currently see a lot of informal groups of citizens who gather and successfully fight corruption in their local communities. They are included in activities where they fight against mini-hydro power plants, local illegal construction, illegal landfills.

Those small groups of people and their success stories are becoming a relevant factor in fighting against corruption, and give hope that changes are possible.

EWB: Various reports suggest that Bosnia and Herzegovina needs to step up its efforts and improve its work on preventing and combating corruption. Can you tell us, which areas are the most challenging and require the undivided attention of the authorities? Do you believe there is enough political will to combat these challenges?

JP: Given the period of the pandemic, I would say that it is the health sector, especially knowing that it affects all of us personally. But generally, within any sector, the following areas are of particular risk for corruption: public procurement, conflict of interest, human resource management (employment) and financial management.

When it comes to political will, it only exists declaratively, with few concrete examples of action. In BiH, we do not have a Law on the Protection of Whistleblowers at the FBiH level. We also have obvious problems with the implementation of the Law on Public Procurement. The law needs to be changed, but the process of amending it is very slow, and it is not yet known whether and in what form it will be amended.

There are some examples of local and cantonal authorities that establish anti-corruption offices and introduce various mechanisms for monitoring the spending of public money, but those kinds of activities need to be at all levels of government because, in this way, it will not give comprehensive results. At the moment, the question is who should lead these processes, because, at the state level, the work of the parliament is blocked, while at the Federal level, we have the Government, which has been in a technical mandate for the last three years.

EWB: According to Transparency International 2020 CPI, BiH is the worst ranking Western Balkan country. What are the main reasons for this positioning, and do you think BiH will be able to improve its performance in the following period?

JP: In our country, there is a significant distrust of citizens in institutions. As long as allegations of corruption are used in political confrontations and skirmishes, citizens will not have confidence that the institutions are seriously committed to solving this problem. In addition, the story in the public space about the initiation of proceedings, without the result of convictions, further deepens the distrust of citizens.

We need some significant anti-corruption activities that would restore the trust of citizens. Some of these activities are beginning to appear, but it is a long way to go.

EWB: Widespread corruption in the process of public procurement and lack of its transparency is an important issue in Bosnia and Herzegovina that even undermined the adequate response to COVID-19. The entire pandemic period is marked by the non-transparent procurement of medical equipment. What is your opinion on how to reduce these risks in the future and prevent the misuse of public funds?

JP: The Law on Public Procurement should provide mechanisms for full transparency, broader public control and stricter sanctions for violations of the Law. The current law does not meet the above assumptions. There are organizations in BiH that advocate these changes, but it is a long process. Until the law is amended, it is necessary to change the practice, which is also influenced by the dominant civil society through various tools. One of them is the portal www.pratimotendere.ba, which monitors and alerts suspicious public procurements.

EWB: The European Commission report stated that BiH should complete the legal framework on the protection of whistleblowers. To what extent are the whistleblowers protected in Bosnia and Herzegovina, bearing in mind that there is no Law on the Protection of Persons Reporting Corruption in the Federation?

JP: According to the Global Corruption Barometer (2016 Survey), more than half of BiH citizens (55%) believe that it is not socially acceptable to report corruption. As the main reasons for not reporting corruption, citizens see the fear of the consequences (33%) and the attitude that their reporting will not lead to change (20%).

The most alarming situation is in the Federation of BiH because there is no legal framework at all to protect whistleblowers. Namely, the FBiH Law on the Protection of Whistleblowers is still waiting for adoption. This problem is partially amortized through the activities of the NGO sector, such as TI BiH, which offers some kind of protection, specifically legal assistance to persons who encounter corruption but also monitors the work of competent institutions, their actions in cases related to corruption.

To restore the trust of citizens, it is necessary to complete the legal regulations and that the competent institutions take over the role of protector and at the same time provide the necessary support.

EWB: How would you assess the institutional framework of BiH when it comes to the fight against corruption? How effective is the Agency for Prevention of Corruption and Coordination of the Fight against Corruption (APIK) in this matter?

JP: The role and competencies of the Agency for Prevention of Corruption and Coordination of the Fight against Corruption (APIK) are limiting. Dominantly, they coordinate activities within the fight against corruption, monitor the effects of such laws, coordinate the work of institutions with public authority in combating corruption, publish information on the state of corruption, but do not prosecute those responsible in corruption cases, which is the main public expectation. In that sense, the responsibility lies with the prosecutor’s office, and what the citizens want to see is a larger number of prosecutions of more serious cases of corruption.

As for the Agency, it could be more aggressive in some segments of work, and more present in public space to put additional pressure on some things to happen, such as the Law on the Protection of Whistleblowers FBiH.

RYCO and WBF pledge to enhance collaboration for better region