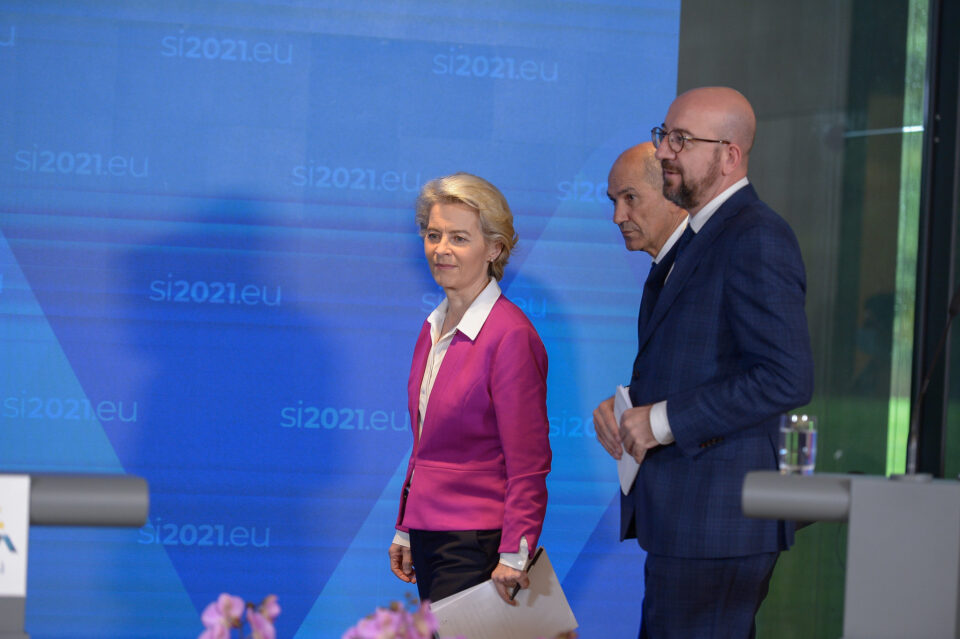 For two weeks, the Western Balkans were higher than usual on the EU’s agenda, first due to the regional tour of European Commission President Ursula von der Leyen and then due to the EU-WB Summit in Brdo, Slovenia.

While von der Leyen insisted in every country along the way that its future was in the EU, and the Brdo Declaration ended up mentioning the word “enlargement”, which was absent in from the previous two Declarations, this proved to be insufficient to alleviate the sense of pessimism about the current state of the process, which has been present in the region for some time.

The events took place at the time when no single country in the region has made a step forward on its way to the EU since Montenegro opened its final negotiating chapter in June 2020. Serbia’s accession negotiations have also been stuck since December 2019, when it opened its last chapter.

While the lack of progress of these countries could be attributed to their lacklustre reforms, the real crisis of the enlargement process comes at the cost of Albania and North Macedonia, the countries which, according to the EC, have done everything to progress to the next stage of the process, as did Kosovo, which fulfilled the formal conditions for visa liberalisation as far back as 2018. Bosnia and Herzegovina has also been waiting for year to be recognised as a candidate country.

The Brdo Summit addressed the Bulgarian veto, with Sofia and Skopje currently working on a protocol which could potentially unblock the start of the accession talks, with even EU leaders sceptical of enlargement, such as Dutch Prime Minister Mark Rutte, saying that the talks should get unblocked. Apart from that, there were no other signals of concrete steps forward for any of the Western Balkan countries.

The media reporting on the event reflected the view of the deep crisis of the EU’s enlargement policy, with Politco describing the Summit as a “showcase of duplicity and double talk”, and The Economist calling on the EU not to give up on the enlargement – showing how low the standards, or at least their perception, have become.

Matteo Bonomi, Researcher at the Istituto Affari Internazionali from Rome and a member of Balkans in Europe Policy Advisory Group (BiEPAG) shares this view.

“At present stage, the EU enlargement is clinically dead and kept artificially alive by events such as the EU-Western Balkans Summit in Brdo”, Bonomi says.

He says that, unfortunately, this is an extremely short-sighted foreign policy.

“It is toxic for longer term EU-Balkan relations. The problem is not only that the current enlargement policy has to a certain extent been contributing to the rise and permanence in power of anti-reformist and illiberal forces in the Western Balkan countries. The hitch is also – and most importantly – that the current policy and linkages between the EU and the Western Balkans seems to fit the interest of the former, while wearing out the latter”, Bonomi adds.

“As a result, the Western Balkans are pushed even more to the margins of the EU integration project. Indeed, the region is increasingly becoming an enclave of economic hardships, social tensions, and unsettled conflicts in the midst of Europe”, Bonomi assesses.

He believes that, If the EU seriously aims at having a positive impact on the region while serving as an anchor of stability, it should aim at correcting dysfunctional linkages between the EU and the WB.

“This could be done by extending to the Western Balkans some of redistributive mechanisms and macroeconomic stabilization tools that are currently in place among the Member States, such as the structural funds and the recovery plan”, Bonomi proposes.

With the paralysis of the political process, both President Ursula von der Leyen and the Brdo Declaration did highlight the instruments with which it has supported the region this far, including the Economic and Investment Package and Instrument for Pre-Accession Assistance, which remain modest in size when compared to the resources available to the EU Member States. Ursula von der Leyen’s tour through the region showcased visits to facilities, such as kindergartens and hospitals, built with EU’s assistance.

Most of the media coverage and commentary, however, remained on the enlargement process. And even if the EU wanted to send reassuring messages on this front, the messages that reached the Western Balkans in the past two weeks were far from unambiguous.

“EU speaks with many voices”

On the first day of President von der Leyen’s visit to the region, Reuters broke the story on “EU no longer agreeing on Balkan membership guarantee”, quoting unnamed diplomates and referring to the difficulties in determining the final text of the Brdo Declaration. Even though the final text of the declaration, in the end, did include the reaffirmation of enlargement, the article had by that time already been widely reported through the region, distorting the message of Ursula von der Leyen that the enlargement is, in fact, still the only game in town.

In capital after capital, from Tirana to Sarajevo, von der Leyen repeated that the region’s future was in the EU and that a lot of progress had been made on this path.

“We have made a lot of progress. We never lose sight of the goal: That is all Western Balkans…(becoming) part of the European Union. That is what we want”, von der Leyen said in her remarks in Pristina, which did not differ much from the remarks in Skopje or Podgorica, or any other capital.

The positive messaging of the European Commission President was not without controversy, judging by the number of negative reactions to her tweet praising the rule of law reforms in Serbia. The praise was soon followed by a Politico article claiming that the Commissioner for Enlargement Olivér Várhelyi has overseen a push to play down concerns about the rule of law and human rights in candidates for EU membership, Serbia in particular.

Finally, at the very end of the Summit, the joint declaration was followed by a display of a lack of consensus among the leaders, concerning the topic of the precise timeframe of accepting the Western Balkans as full EU Members.

“Timetable for enlargement is not a part of the declaration, but I think that most of EU Member States have shown the will that over the next decade we will focus on the EU membership in the Western Balkans”, Prime Minister of Slovenia Janez Janša, who reportedly proposed 2030 as the date by which the region should enter the EU.

Outgoing German Chancellor Angela Merkel was among the opponents of the decision. “I don’t really believe in setting dates, I believe in making good on our promises: Once the conditions are met the accession can take place,” Merkel told the reporters.

Srđan Majstorović, Chairman of Governing Board at the European Policy Centre in Belgrade, also a BiEPAG member, believes that the past weeks have shown a widening gap between EU’s alleged strategic orientation regarding integration of the Western Balkans on one side, and lack of actual consensus among the EU Member States on how, when and if the enlargement should be completed, on the other.

“EU speaks with many voices, and this cacophony is hampering its ability to articulate honest and credible common position with regards Western Balkans countries’ accession”, Majstorović says.

He adds that this also “helps local autocrats to hear only the positive messages coming from the EU and its Member States, while neglecting justified criticism primarily concerning functionality of our democracy, rule of law and respect of fundamental rights.“

“Unfortunately, the lack of public display of constructive criticism coming from EU officials and Member States’ representatives on these issues is causing decline of EU’s credibility as well. In reality, EU officials want to keep the process alive by any means – which is positive, but not at the expense of respect of Copenhagen criteria for EU accession – while representatives of the EU Member States are primarily interested in promoting their own bilateral agendas and do not have any other option but to continue cooperation with Governments which do not fulfil EU accession requirements”, Majstorović says.

According to him, EU must revisit its strategic priorities, because it must be able to resolve remaining issues in the region which is geographically situated within its own territory.

“It is obvious that accession process has been stuck in past couple of years, which has undermined EU’s credibility in the region. Now is the ripe time to think about how to adjust it – to make it functional once again”, Majstorović concludes.

The agreement on a protocol between Skopje and Sofia would be the right place to start when it comes to moving the region further. Bulgaria first has to hold elections, both presidential and parliamentary, on 14 November.

Tena Prelec, Research Associate at the University of Oxford and a member of BiEPAG, assesses that after the elections there may be some movement, but it is unlikely to be significant, given that it might take a long time to form a government in Sofia.

“Thus, nothing much is likely to be resolved by the end of the Slovenian presidency due to the political uncertainty in Bulgaria at present”, Prelec says.

She, however, believes there could be some inroads during the French presidency of the EU Council, which follows the Slovenian one. President Emmanuel Macron has so far been regarded one of the EU leaders strongly critical of the enlargement, but Prelec sees his role within the EU changing.

“Macron will probably try to assume the unofficial post of ‘Leader of Europe’, which has just been vacated by Angela Merkel. He has already shown willingness to shape the EU Enlargement process by pushing for a new methodology in 2019-2020. In spite of the looming elections in France (or perhaps because of them, if he manages to place the message well with the domestic audience), Macron might therefore try to broker a deal with Bulgaria to score a personal ‘win’. It is the best scenario we can hope for, at the moment”, Prelec assesses.

Overall, she adds, there is the understanding from the EU’s side that the situation of individual member states blocking candidate countries’ accession process to score domestic points is unacceptable, but there are no solutions at hand.

“Until the veto power is taken away from EU member states, by implementing Qualified Majority Voting, arbitrary blocking due to bilateral issues, rather than on the merits of the accession process, will continue in one form or another”, Prelec concludes.

It seems that this would have to be only one of many issues that would have to be sorted out when it comes to the EU enlargement. And the regular Summits and visits to the region might not be enough to do the job.