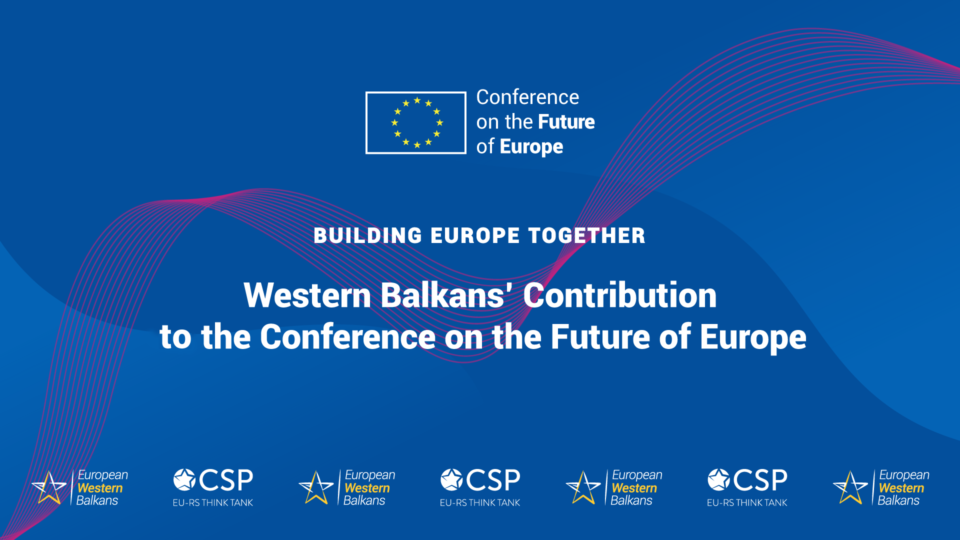 The announcement is also available in Albanian, Macedonian and BCMS languages.

BELGRADE – The event “Building Europe Together: Western Balkans’ contribution to the Conference on the Future of Europe“ is taking place on Monday 18 October, with the aim of summarising and projecting the essence of the regional debates that were held during this year.

In July 2021, the panel “What can the Western Balkans do for the EU?”, which was part of the Prespa Forum for Dialogue, inaugurated a series of public and civic initiatives for the citizens from the Western Balkans to engage and contribute to the Conference on the Future of Europe.

Until the beginning of October, multiple events were organized throughout the Western Balkans, including the events in Skopje, Sarajevo, Pristina, Kruševo and Belgrade.

The purpose of the event on Monday is to summarise these discussions, give the voice to the people who are often not heard enough locally and to put the light on WB citizens who are keen for the region to become a source of solutions to the existing problems that all the citizens in Europe face.

The discussion will be moderated by Nikola Burazer, Programme Director of the Centre for Contemporary Politics and Executive Editor of the European Western Balkans.

Take a look at video European External Action Service about the work of Selma Prodanović, one of the participants of the panel. It was released within the programme “Europeans making a difference – Women leading​ the way in the Western Balkans”.

The Conference of the Future of Europe was launched this year by the European Parliament, the Council and the European Commission, who have committed to listen to European citizens and to follow up, within their sphere of competences, on the recommendations made. The Conference is decentralized, with European, national, regional and local authorities, as well as civil society and other organisations invited to organise events and contribute ideas throughout the second half of 2021 and the first half of 2022. By the next spring, the Conference is expected to reach conclusions and provide guidance on the future of Europe.

[EWB Interview] Sarrazin: Germany is clearly stating its political will for enlargement

After London: What Next for the Berlin Process?