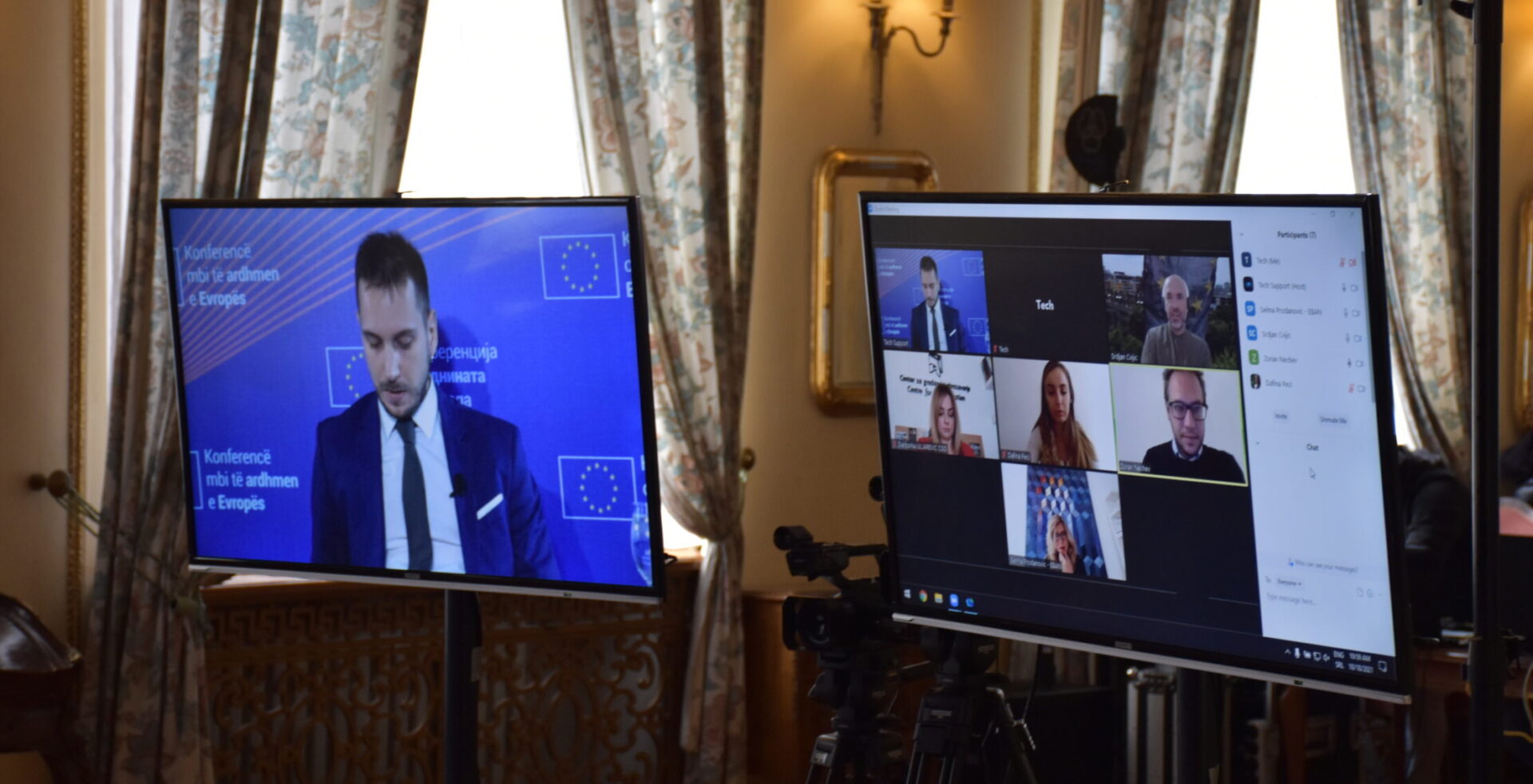 BELGRADE – The EU can benefit from the Western Balkans, which can enable it to become a strong geopolitical actor, provide security and economic cooperation, but also solutions and ideas of its growing business sector, stressed the participants of the event “Building Europe Together“: WB contribution to the Conference on the Future of Europe”.

The purpose of the event, which was organised in Belgrade on Monday and moderated by the Executive Editor of the European Western Balkans Nikola Burazer, was to summarise the previous discussions taking place during the Conference on the Future of Europe, in which the organisations from the region also participated.

Donika Emini, Executive Director of the CiviKos Platform and a member of the Balkans in Europe Policy Advisory Group (BiEPAG), emphasised that the EU should not see the integration of the Western Balkans as the process only benefiting that region.

“EU should stop regarding the Western Balkans as the region draining the EU, getting the benefits without contributing anything. This is a transaction. Western Balkans can contribute to the EU in the area of security, as well as via the economic cooperation“, Emini said.

According to Emini, if the EU wants to complete what it started in 2003, to shows that it is a powerful geopolitical player, it needs to deliver in the Balkans.

“By completing the jigsaw in the region, it can show that it is a powerful actor”, Emini stressed.

Selma Prodanović, entrepreneur and CEO of 1MIllionStartups, underlined the importance of business, especially start-ups in the cities of the region, that can improve the image of the Western Balkans in Europe.

She pointed out that the Western Balkans can help achieve the goals of sustainable development and that businesses from the region can offer good solutions.

“We see the start-ups, including the ones in the Western Balkans, moving towards the solutions of sustainable development goals. They cannot be achieved by individual countries. These problems can be solved only globally”, said Prodanović.

She added that, looking from a perspective of business angels, it doesn’t matter where the ideas and the solutions come from, and that many quality ideas are indeed coming from the Western Balkans.

The discussion also focused on the ways of improving the enlargement process and the integration of the Western Balkans with the EU.

Srđan Cvijić, Senior Policy Analyst at the Open Society European Policy Institute and a BiEPAG member, focused on the perception of the enlargement n the EU, emphasising that the research his organisation had done in France showed that the public opinion can be changed.

“Our recent research shows that the more experience the citizens have with the Western Balkans, the more they support its integration to the EU”, says Cvijić.

According to him, the countries of the Western Balkans, in addition to the necessary reforms, should launch campaigns in order to improve the image of themselves in the member states.

“Serious campaigns in the EU Member States on the enlargement can make a world of difference. Candidates can also do something themselves to improve their image, this is not happening at the moment”, Cvijić says.

Zoran Nechev, Head of the Center for EU Integration of the Institute for Democracy ‘Societas Civilis, also a BiEPAG member, outlined his proposals for the reform of the process. The first reform he proposed was the introduction of the quality majority voting for the intermediate phases of the process – opening and closing of clusters.

Nechev stressed that, while Western Balkan countries should increase their capacities, the EU should do the same.

“The EU needs to increase its absorption capacity by diversifying the portfolios in which the Western Balkan countries are dealt with on the European level“, he proposed

Nechev added that Western Balkans should be included in the already existing EU mechanisms such as justice scoreboard, rule of law reports, European Semester Framework – even if the countries of the region get the bad results of these assessments, they would at least know what to do to improve, he said.

Daliborka Uljarević, Executive Director of the Center for Civil Education in Montenegro, said that people in the region see the importance and role of the European Union for change and a better life, but also that they are not satisfied with the progress of their countries on the road to the EU.

According to Uljarević, it would be very important for the EU to put more focus not only on institutions but also on the other actors in the countries of the region.

“When I say other actors, I also mean civil society. The civil society is very important, especially in the region”, told Uljarević.

She noted that climate in the region is very negative for an argument-based dialogue.

“EU needs to show zero tolerance for the hate speech and smearing campaigns. I think it is very important that the EU provides sustainable support to the civil society – organizations, not the projects, should be supported”, said Daliborka Uljarević.

Dafina Peci from National Youth Congress of Albania, focused on the perspective of young people in the region, emphasising how much the countries are losing due to brain drain.

She stressed the importance of improving the mechanisms of intra-regional cooperation and understanding the needs of youth in the Western Balkans.

“There is a need to understand the labor migration and brain drain in the Western Balkans. Intra-regional mobility mechanisms need to be strengthened. Let us use the very good example of RYCO but not stop there, we need to encourage circular migration. Commitment comes from properly understanding the situation. Our attitude, our requests need to be based on real needs”, Peci said.

Várhelyi to present the 2021 enlargement package in AFET on Tuesday

Council of the EU approves conclusions on EUFOR Althea, regrets the prolonged crisis in BiH