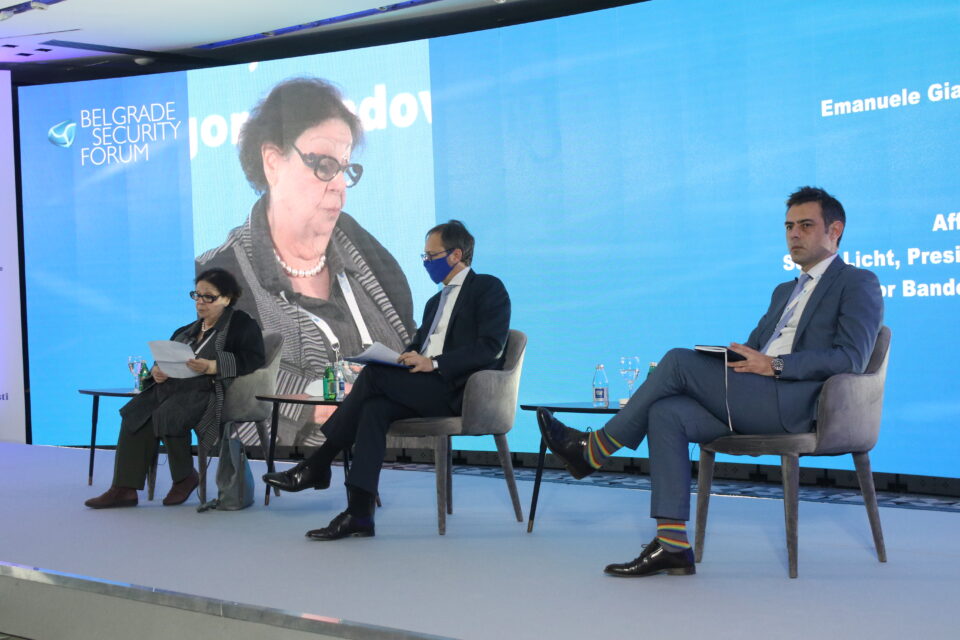 BELGRADE – “In a time of crisis, we have to be honest with each other. Otherwise, we risk hypocrisy, we are at risk of doing something we don’t want to do coronavirus crisis has shown us how fragile we are”, highlighted Director of Belgrade Center for Security Policy Igor Bandović, opening the 11th Belgrade Security Forum.

In the next three days, the 11th Belgrade Security Forum will discuss the effects of the pandemic, economic uncertainty, the crisis of democracy, and the growth of authoritarianism, xenophobia, and mistrust, all of which, as the organizers warn, “put humanity on one of the greatest tests in history.”

The forum is jointly organized by the BFPE Foundation for Responsible Society, the Belgrade Center for Security Policy, and the European Movement in Serbia.

EU Ambassador to Serbia Emanuele Giaufret assessed that the enlargement is a matter of credibility for the EU.

„Enlargement is also important, as it is threading the path to the European Union for the Western Balkans to involve itself in the burning issue of our common future“, said Giaufret.

He stated that Serbia’s membership in the EU has no alternative, which was confirmed during the EU-Western Balkans summit, where the leaders reiterated their full support for the process of enlarging the region. Giaufret also mentioned last week’s report of the European Commission, where cocoa says that everything that needs to be done on the reform path is emphasized.

He assessed that many initiatives and processes are underway, such as constitutional changes and inter-party dialogue, but it is important that these reform processes go in the right direction.

Giaufret thanked the civil society in Serbia, which is continuously working on reconciliation and democratization of Serbia and the region.

He said that we live in a world defined by permanent battles of narratives and erosion of democratic principles.

„Despite these trends, EU values are still the best for navigating the future. COVID-19 is the latest stress test for the EU, but in space of a few months, we have broken new ground on solidarity. For the first time, we have created a centralized mechanism for purchase, stocking and distributing medical products and 2 billion vaccines“, Gaiufret said.

He assessed that the EU become the pharmacy of the world stressing that the EU donated as many vaccines as they have distributed to their citizens.

„One of the biggest challenges and disappointments is that local politicians haven’t evolved in their thinking from the 90s“, said Eskobar.

He said that the desire of the United States is for all six countries to become members of the European Union.

“These are European countries, some of which have made huge progress, and their accession to the EU would not pose a danger to existing members of the Union, but a great opportunity,” Escobar said, participating via video link at the 11th Belgrade Security Forum, Gabriel Escobar underlined.

According to Escobar, the US administration wants to resolve the currently unresolved issue in the Balkans adding that Western Balkans has enormous potential for continued economic growth.

Escobar stated that the economy of Serbia has increased seven times since 2000 and that the economies of Montenegro and Kosovo have recorded double-digit percentage growth in the conditions of the coronavirus pandemic.

“We welcome the economic integration of the countries of the region. People from the Balkans are successful to go anywhere, and we want them to be successful in the Balkans as well,” Escobar concluded.