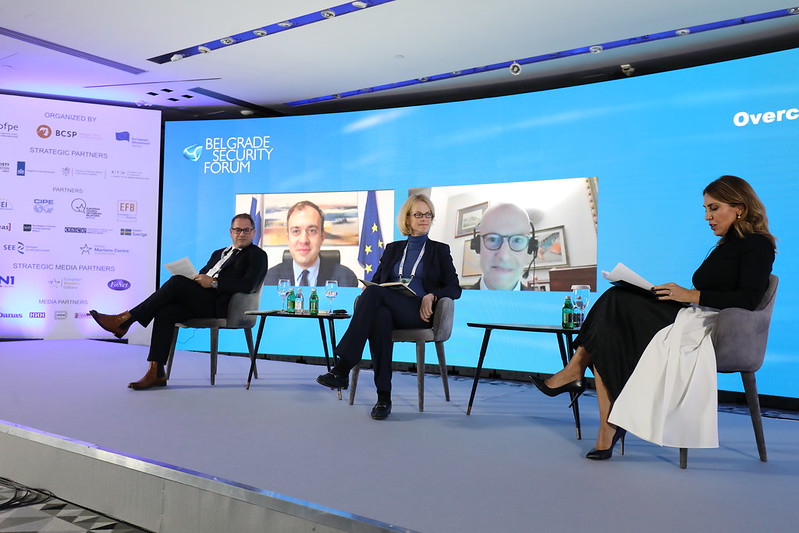 BELGRADE – Concerns about whether the EU integration of the Western Balkans was in danger and reassurances of the officials of EU institutions and Member States that the enlargement is still on the agenda marked the second panel of this week’s Belgrade Security Forum, “Supporting Western Balkans – Overcoming Obstacles to European Integration”.

Moderator of the panel Majlinda Bregu, Secretary General of the Regional Cooperation Council, pointed out that, according to RCC research, 62% of the Western Balkan citizens still support EU membership, but one third of them believe that they will not join the EU by 2030 and more and more people believe that they will never join the Union, which Bregu assessed as a source of concern.

Tasos Chatzivasileiou, Secretary of the Standing Committee of National Defense and Foreign Affairs and Advisor to the Greek Prime Minister, expressed his country’s cocern about the rising Euroscepticism.

“Maybe some Western Balkans are not delivering, but the EU is not delivering as well”, he said, adding that  Europe had turned a blind eye to local leadership in the Balkans that were “seriously corrupt”.

Clive Rumbold, Senior Expert, European External Action Service, also stressed that the important thing is that enlargement found its place in the recent Brdo Declaration, in black and white.

“EU is getting a lot of money to the Western Balkans, EU taxpayers’ money, and that is not with no reason, it is because these countries are seen as future EU Member States”, Rumbold stressed.

Christiane Hullmann, Head of the Division for the Western Balkans at the Federal Foreign Office of Germany also stressed that the EU perspective was there.

“It is a strategic necessity for both the EU and the region. Accession talks with Albania and North Macedonia need to start as soon as possible”, Hullmann said.

Sylvain Guiaugué, Deputy Director for Continental Europe at the Ministry of Foreign Affairs of France, concurred with this message, saying that Brdo Declaration, adopted earlier this month, is a kind of a roadmap, and recalls a basic truth – that the future of the Western Balkans is in the EU, which Guiaugué said, was a message also endorsed by President Macron.

France will be holding the Presidency of the Council in the first hald of 2022, Guiaugué said,  the region will be one of the French priorities, adding that the region needed to become a net contributor to the security of the European Union.

“Western Balkan is conveyed as a security threat, a road through which the migrants are coming to Europe, and a source of organised crime. However, the region is participating in the Common Security and Defence Policy missions in Africa, this needs to be communicated”, Guiaugué said.

He said that it will be the job of France to make sure that the Western Balkans is included in the reflection on the strategic autonomy to be held during the Presidency.

Berlin Process was also one of the topics of the discussion, with Christiane Hullmann stressing that it is the most important regional framework adding that, within it, “it takes six to tango”, which is sometimes difficult, but also expressed hope that the Common Regional Market will be established by 2024.

“My government had hoped that it was possible to reach the four agreements on mobility in the region already in July during the Berlin Process and then in the October Summit in Slovenia”, Hullmann added.

Even though it was initially envisaged to last only five years, Berlin Process will continue, Hullmann said, adding that this will make the region stronger, but also more attractive for investment.

“I hope that my future boss will remain committed to the Berlin Process because the benefits are so obvious”, Hullmann said, referring to the pending change of government in Germany.

She said that more regular meetings on the different agenda items, such as the Green agenda, and the Common Regional Market, with the strong role of the RCC, would be beneficial.