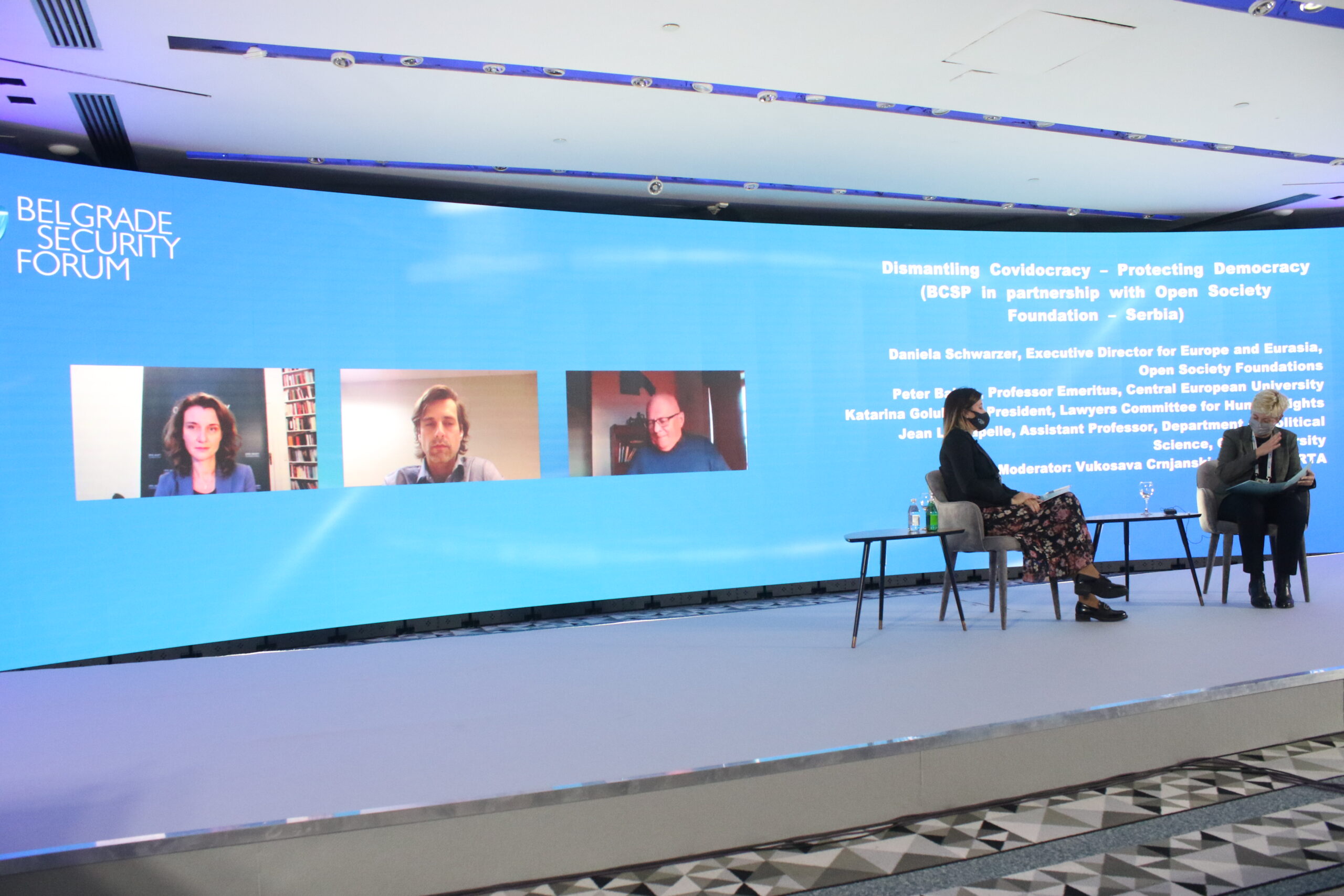 BELGRADE – COVID-19 pandemic has unveiled weaknesses of governments and societies, while the citizens should’t have to choose between health safety and human rights, concluded the participants of the first panel of the Belgrade Security Forum “Dismantling Covidocracy – Protecting Democracy”.

Daniela Schwarzer, Executive Director for Europe and Eurasia of the Open Society Foundations, said that the pandemic has caused the EU Member States to take their fate into their own hands because managing of pandemic had to be done by states themselves.

“In some countries, this has led to strengthening of the executive branch and stressing efficiency over the decision-making in parliaments”, said Schwarzer.

Answering to question of how did other actors influence public opinion during the pandemic, she said that a number of actors in some regions used the crisis to self-promote, which is often referred to as ‘’vaccine diplomacy”.

Katarina Golubović, President of Lawyers Committee for Human Rights from Belgrade, said that before the pandemic, the institutions in Serbia were already weak, but since March 2020, there is a state which she described as management without institutions.

“All the power went to the government, thus there wasn’t any room for dialogue and solidarity which is the key to democratic handling of the crisis. The freedom of information, among other human rights, was under attack“, said Golubović.

She underlined that a state of emergency was in power for 52 days and immediately after that the elections were held, adding that this is what caused the riots of 2020.

Meanwhile, Professor Emeritus at the Central European University, Péter Balázs, commenting on the situation in Hungary, stated that Prime Minister Viktor Orbán didn’t need the pandemic to initiate the dismantling of democracy.

“When he won the elections in 2010, he started pulling down a system of checks and balances, attacking media and civil society. The first crisis he used to establish his power was the migration crisis. This model has affected other countries, firstly Poland, and then Slovenia“, said Balázs.

Balázs objected to the term illiberal democracy, which is often used to describe Hungary and other countries. He explained that he found nonsensical because a country is either free or it is not a democracy.

Hahn in Belgrade met with Serbian officials and opposition representatives

EU: Pace of Kosovo’s path towards the EU depends on implementation of reforms