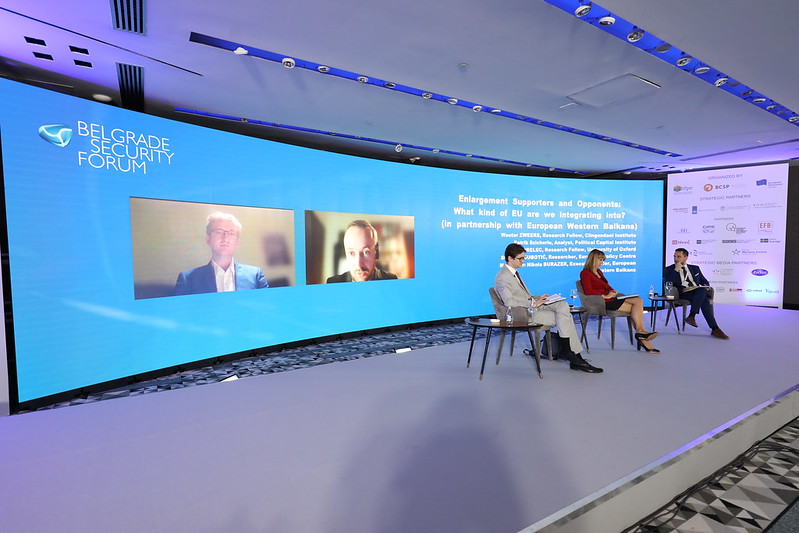 Panel discussion at BSF 2021 "Enlargement supporters and opponents – What kind of eu are we integrating into?"; Photo: BSF / Nikola Ilić

BELGRADE – While some EU Member States, such as the Netherlands, are sceptical towards the enlargement, it is doubtful whether supporters such as Hungary are helpful for the Western Balkans, stressed the participants of the panel “Enlargement supporters and opponents – What kind of eu are we integrating into?”, organised by the Belgrade Security Forum in partnership with the European Western Balkans.

Wouter Zweers, Research Fellow at the Clingendael Institute, said that the Netherlands was sceptical not necessarily because of the enlargement process itself, but because of the attitude towards EU as a whole.

“In 2005, at the time of the referendum for the European Constitution, the Dutch for the first time really questioned the further integration, ever-closer Union… Since then, EU has developed in ways the Netherlands did not want to see. With UK leaving, the Netherlands has lost a major ally… Scepticism on further EU integration has translated to the scepticism towards EU enlargement”, Zweers said.

He added that the rule of law crisis within the EU does have an effect on the Dutch perspective on the EU.

“Political actors in the Netherlands have become more cautious of investing the political capital and arguing for EU enlargement”, Zweers said.

On the other hand, Patrik Szicherle, analyst at the Political Capital Institute from Budapest, said that Hungary has a genuine interest in integrating the Western Balkans in the EU, primarily for the reasons of national security.

“That is the first layer. The second layer is that on the EU level Prime Minister Orbán needs allies. The more governments there are in the EU who would back his views, for example in the rule of law debate, the better it will be for him”, said Szicherle, adding that, if the authorities of, for example, North Macedonia were closer to Orbán’s positions, he would put the country higher on his list of priorities, the way he did with Serbia.

However, Szicherle said, his push has not been successful so far – it can even be a hinderance to Serbia because of Orbán’s image in the EU.

Tena Prelec, Research Fellow at the University of Oxford, remarked that what was once the role in the United Kingdom in the Balkans has been taken over by Hungary “in a twisted way”.

“By enlarging the club, it is possible to water it down politically. To a certain extent, Hungary is doing this at the moment. But of course, the model of how enlargement should work was different under the UK”, Prelec said.

Strahinja Subotić, Researcher at the European Policy Centre in Belgrade, assessed that the fact that a hybrid regime such as Hungary supports Serbia was counterproductive, because it created and illusion that the country is ready, while the fact is that it has not reformed.

He added that his organisation was trying to find some solutions that might take care of the EU’s fear that the Western Balkan countries will abuse veto rights as Member States. The proposal includes introducing accession in stages, which would give the countries membership rights but not veto rights, while other Member States would have a stronger reversibility mechanism under a quality majority vote.

“Status quo is something that works the best for the current government of Serbia, because the it can blame the EU for the lack of progress”, Subotić added.

When it comes to the future of the enlargement, Tena Prelec assessed that the process is not on the list of the priorities. However, not all news are negative.

“The weakness of enlargement is obscuring the willingness for change”, Prelec said, pointing at the examples of civic movements in the Balkans, including those focusing on the environmental issues, and investigative journalism, which is, according to her assessment, flourishing, especially in Serbia.

“There is this authoritarian axis and world leaders learning from each other on how to control the media and the judiciary. But we can subvert these tendencies by working on a democratic axis”, Prelec said.

Wouter Zweers said that the moment when the EU starts to function a bit better itself and when polarisation between Member States starts decreasing, will create mental space for politicians to take a more constructive approach to the enlargement. He added that the more sceptical countries such as the Netherlands can have a positive impact.

“It is hard to assess this motivation behind the decision to give the enlargement portfolio to Hungary. Through the Enlargement Packages, the EC has shown that sometimes it is not a neutral actor, which has led to other countries, such as the Netherlands, making their own reports. This is negatively affecting the credibility of the process”, Zweers said.

Patrik Szicherle said that the current Commissioner Olivér Varhelyi had the Hungarian government’s interests in mind, but that he and his Directorate General cannot achieve much and that he cannot make decisions on his own.

Subotić agreed with these assessments.

“Hopefully, I would like for Wouter to advocate that the Netherlands gets the portfolio for enlargement in the next Commission, it would send a message that EU enlargement is a priority and that rule of law is a priority”, he concluded.