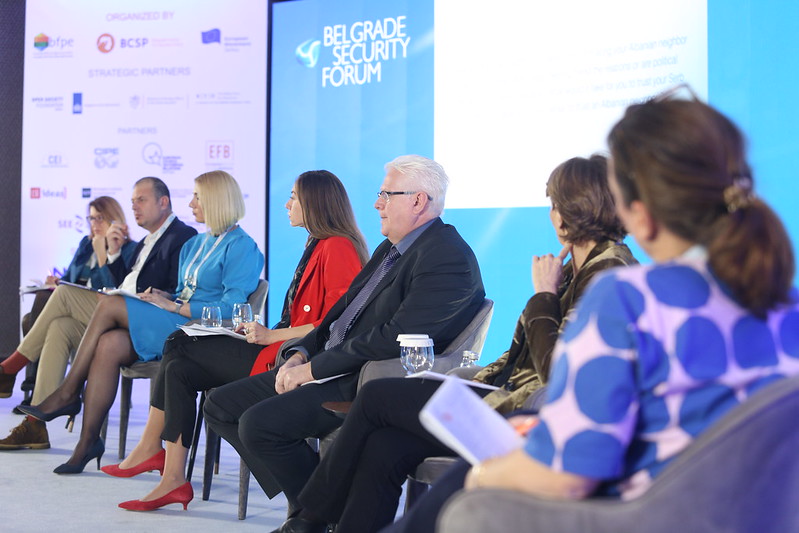 BELGRADE – Research shows that the ethnic distance between Albanians and Serbs persists. On the other hand, the view of the participants of the final panel of the Belgrade Security Forum 2021, was that the political leaders are the ones responsible for the lack of progress in the Belgrade-Pristina Dialogue.

Maja Bjeloš, Senior Researcher at the Belgrade Centre for Security Policy, presented the results of the newest survey her think tank had undertaken last month in cooperation with the Kosovo Centre for Security Studies. According to the results, two thirds respondents in both Serbia and Kosovo believe in the Belgrade-Pristina Dialogue and in their respective leaders. They believe that the the solution will be reached, but not in the near future.

On the other hand, the results have shown that the majority of the citizens find the Belgrade-Pristina Dialogue to be a non-transparent process lacking impact on their lives.

“This leads us to the conclusion that the unconditional support to the leaders is shaped by the media”, Bjeloš said.

She added that the ethnic distance between Serbs and Albanians has not diminished. In both societies there is a polarisation over the question whether there would be a lasting peace.

Donika Emini, Executive Director of the CiviKos Platform and a member of the Balkans in Europe Policy Advisory Group (BiEPAG) assessed that the level of support to the Dialogue were surprising, given that it had not delivered benefits to the people, only the political leadership.

She added that, at this point, we only see the blame game, and fit dragging approach, adding that the inability to agree is entirely political and not based on the real differences between the ordinary citizens.

“If it continues this way, the next five years will be the status quo which will deteriorate in a negative scenario”, Emini said.

She added that, at this point, the joint efforts between the EU and the US are there, and there is also a hope because of the political change in Kosovo.

“Let us hope that this will be a good starting point”, Emini said.

Miodrag Milićević, Executive Director of the NGO Activ, agreed that the problem is not with the,  people but the political leaders.

He, however, assessed that the Dialogue was not looking promising.

“The major point of disagreement is of course the final status of Kosovo, which cannot really be resolved, at least not in due course. The focus should be on the practical issues”, Milićević said.

He added that the status question, no matter what, will be on the table sooner or later, but if the two sides wait for another 5-10 years, the time will be needlessly lost.

“What is happening in the public currently is shameful for both societies. The inflammatory language needs to stop”, Milićević stressed.

The ownership of the process was also tackled during the panel. Maja Bjeloš said that Kosovo leadership should undertake the dialogue with Kosovo Serbs in order to counterbalance the leverage Belgrade has over them.

“They need to be shown that they are valuable and involved in the decision-making”, Bjeloš said.

She added that nobody worked on building the national consensus prior to reaching previous agreements.

“I advocate for more openness. We are witnessing a leadership crisis. We are shout out for this process, we don’t own this process and feel that this Dialogue is imposed”, Bjeloš said, adding that, in Serbia, the process has been captured by one person.

Donika Emini said that the EU would probably take ownership of the process was successful but now it is reluctant to do so, while József Pandur, Political Advisor to the EU Special Representative Miroslav Lajčak said that this process should be owned by Belgrade and Pristina and that it is up to citizens in both communities to push political elites towards the solution.