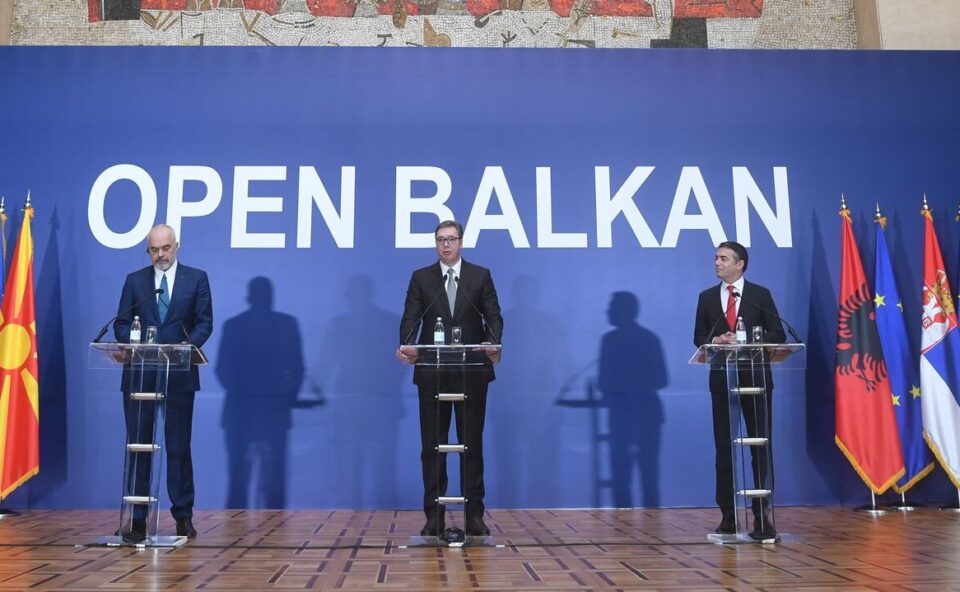 BELGRADE – Leaders of Albania, North Macedonia and Serbia met with the business community representatives in Belgrade today in the context of the Open Balkan initiative, after which they stressed that a more effective implementation of the free movement commitments to in the Western Balkans is needed. They announced that the next meeting will be held in Tirana in December.

President of Serbia Aleksandar Vučić said at the joint press conference that the business people were fully supportive initiative.

“However, what is, I would say, frustrating, is the fact that what we agreed, we weren’t able to fully implement. This is why we agreed today on how we will do this in the future”, Vučić said.

He announced that the leaders had agreed on the formation of the Implementation Council and that, in the next seven to ten days, meetings will be held between the customs agencies, phytosanitary and veterinary inspections of the three countries in order to analyse how the movement of goods is advancing.

Vučić said that the services and digital transformation were also the topics of the meeting and he thanked the Atlantic Council for providing the expertise in this area.

“Our job in the coming period is to see where we have fallen short, and we have received the examples of our business people, who said that, if they want to export milk to North Macedonia and arrive at the border on Friday, they have to wait until Monday. This is unacceptable”, Vučić said, adding that this was happening despite the fact there are formal agreements between Serbia and North Macedonia and that, therefore, a review of the implementation was warranted.

President of Serbia also announced the next meeting within the initiative which is planned to be held in Tirana in December, following the Christmas day. He said that, at the meeting, a memorandum on understanding on working permits will be on the agenda, the aim of which will be to keep the people in the Western Balkans and not having to rely on foreign workers.

Prime Minister of Albania Edi Rama said that the business community representatives asked the leaders to translate what was signed on the political level to reality at the border crossings.

He also thanked the members of the Atlantic Council for their support for the initiative and announced that its study on the benefits of the economic integration of all six Western Balkan countries will be presented in Tirana.

“We are committed and we have promised that in December in Tirana we are going to achieve concrete results so that, from January, there would be a great relaxation at the borders when it comes to the companies, to the distributors, and to the agriculture workers”, Rama said.

Deputy Prime Minister of North Macedonia Nikola Dimitrov, filling in for Zoran Zaev who announced his resignation as Prime Minister on Sunday, said that it would be a great benefit if trade barriers were eliminated, making the region more attractive to the investments.

“The better we cooperate in the region, the easier it would be for us to convince the EU countries that we would not import problems, but produce solutions”, Dimitrov said.

He said that there are conditions for the political will expressed by the leaders about overcoming the current problems of trade in the region to be translated to legal solutions, that is international agreements that are missing.

“At our meeting in Tirana in December, we would like to announce a great number of wins”, Dimitrov said, adding that the inclusivity of the initiative is important and the more successful Open Balkan is, the easier it would be for it to attract other countries in the region.

Answering a question from a journalist, Edi Rama said that the Open Balkan was all-inclusive, but that Albania, North Macedonia and Serbia, which decided to move faster, will not be waiting for the other sceptical countries from the region.

Asked whether the participation of North Macedonia in the Open Balkan would be at risk should VMRO-DPMNE, which expressed reservations to the initiative, comes to power, Nikola Dimitrov said that for the citizens of North Macedonia, it is important to progress, which includes cooperation with the neighbours, whoever is in power. He stressed that it was important for the country to remain a part of the initiative.

Aleksandar Vučić said that he will not justify to anybody whether the Open Balkan is a “part of this or that process, to avoid getting bad grades”.

“Who wants to join (the Open Balkan) is welcome, nobody is forcing no one. You will see, in a couple of years, a difference between us and everybody else in terms of economic growth”, Vučić said.