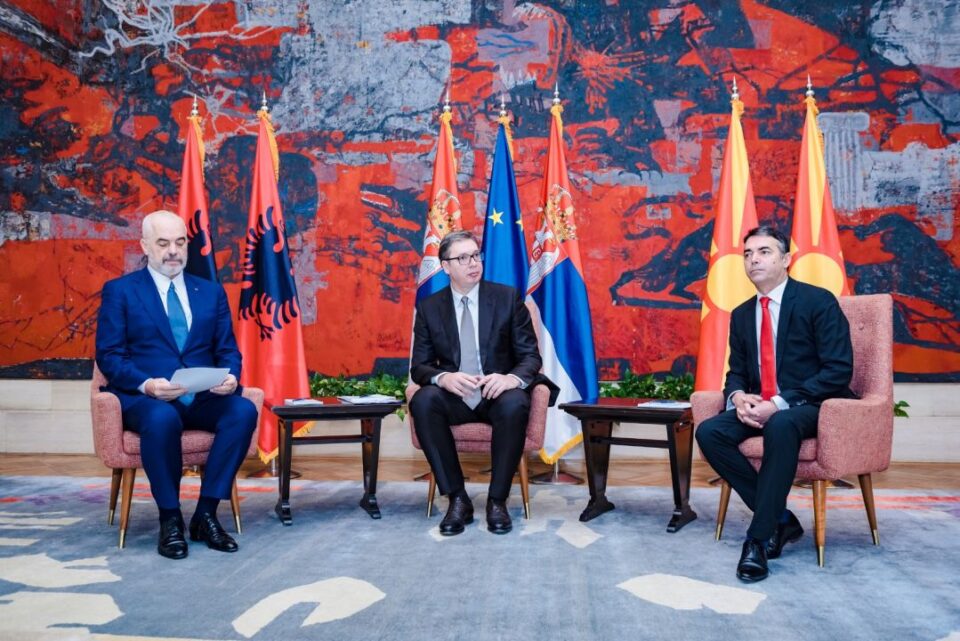 BELGRADE – Governments of Albania, North Macedonia and Serbia released a joint statement on Thursday evening following the meeting of the Open Balkan initiative.

We bring the original statement in full:

“The EU and its member states, together with the partners from the region reaffirmed, their unequivocal support for the European perspective of the Western Balkans at the Brdo Summit on 6th of October.

The Western Balkans reiterated their dedication and commitment of the region to European values and democratic norms, to the primacy of democracy, fundamental rights and the rule of law.

However, the questionable capacity of the EU to integrate new members, internal debates among EU members states and bilateral relations have hindered real progress of the region towards the EU.

North Macedonia is a prime example of the failure of the EU to deliver on its promises. Its Government went great lengths to accommodate Brussels’s conditions, only to find itself isolated and left to deal with the repercussions of the EU’s decisions. The weakened prospect of European integration threatens to leave us more disintegrated than ever. The sentiment is shared along the region.

While the EU is developing new and far-reaching strategies, the region is desperately trying to implement the existing ones. As we find our road to the EU derailed, we remain committed to reach the EU standards and bridge the economic gap with the EU.

We cannot allow for this negative spiral to threaten the very foundation of the region’s future and prosperity. The EU is moving forward while the region is stuck in the EU’s own dilemmas.

The EU should and must explore all avenues for advanced integration of the Western Balkans in the period preceding the accession, along its commitments for phased-in accession as defined in the new methodology. Accordingly, it would be useful to include the region in the development of the EU trade and tax policies, such as carbon border adjustment mechanism and steel safeguards, to name but a few.

We could also explore the possibility of the Western Balkans being exempt from different erga-omnes trade policy measures. We can envisage our Universities to be included in the EU Higher Education and Research  Area providing thus an equal chance in taking part in tailored EU’s programs, research and innovation. At the same time, our agriculture is gasping for funds, with a vast potential to expand and deliver high quality productions to the EU market.

This could prevent having a negative impact on stabilization and economic performance of the region. We believe that it is in the EU’s own interest to help build and promote a confident and prosperous region. Further, we could together explore participation in Schengen and progressive integration into the EU Single Market.

Today’s world is rapidly changing. It is time to act and decisively so. We cannot afford nor we will be forgiven for the lost opportunities, complaisance and lack of determination to achieve the strategic vision. We have to better understand each other if we want to achieve the best results. If one thinks we have to act now, that was already yesterday.

To this end, we reiterated today our decision to deepen economic cooperation in the framework of the Open Balkans Initiative, building on the agenda of the Berlin Process, focusing on speedy and customized implementation. We have engaged the Chambers of Commerce in this endeavor and have tasked them with the preparation of a detailed Roadmap on the implementation of the MoU on facilitation of imports and exports in the Western Balkans, signed in Skopje on 29th of July.

We approved the Roadmap of implementation of measures on trade facilitation today and asked CIF to monitor the process of implementation forward. We also decided to create an inter-Ministerial Council which will work closely with the Chambers to implement these measures.

We invite and welcome all others in the region to join us. The Open Balkan is open.”

Citizens’ Assembly, a joint project of European Parliament and Parliament of Montenegro, held in Podgorica

Sassoli: EU accession process has to start for Albania and North Macedonia