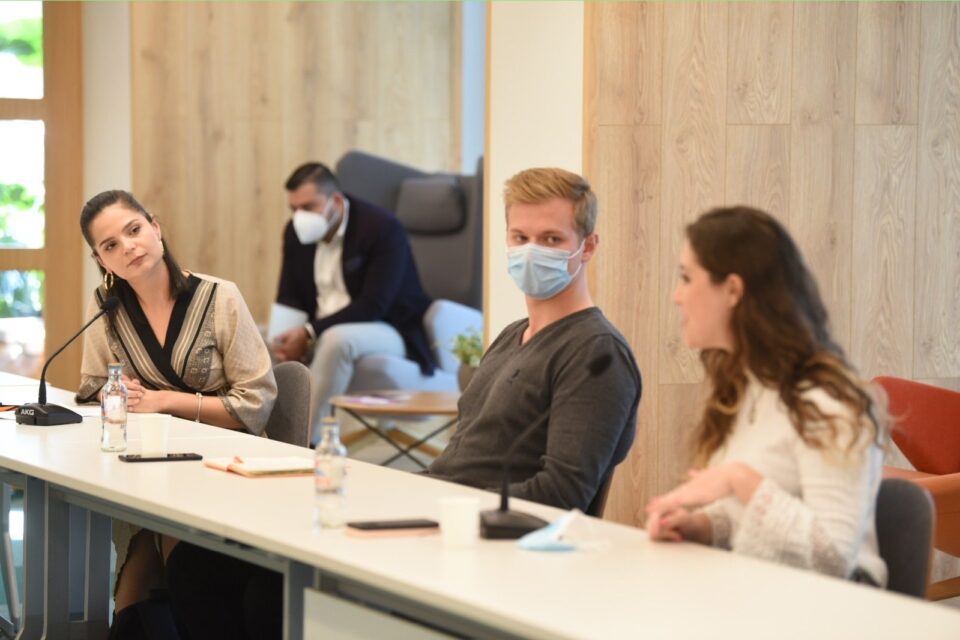 Youth Talks in Europe House focused on the Conference on the Future of Europe; Photo: Twitter

SKOPJE –  Young people from the Western Balkans can contribute to the Conference on the future of Europe because Europe is more than just the EU, stressed the participants of the event organised by the EU Delegation to North Macedonia and Europe House Skopje.

On the occasion of Europe House’s second birthday, the EU Delegation is giving young people from North Macedonia the floor for their voices to be heard by launching a series of talks in the context of the ongoing Conference on the Future of Europe.

At the kick-off event, Young European Ambassadors, activists, and the Secretary-General of the Young European Federalists family invited young participants to debate together and share their peers from all over Europe and help in finding the right responses to the common challenges.

Deputy Head of EU Delegation to Skopje Julian Vassalo praised the young people for their still strong enthusiasm and interest in the future of the Europe.

“Keep that enthusiasm. Keep thinking about our unity and its strengthening”, Vassalo told youth presidents at the event

Miloš Ristoski, Secretary-General of Young European Federalists, explained during the debate the process of the Conference on the Future of Europe.

According to him, although the process is extremely complex and consists of many different parts, it is open to the public.

“What will be the result of the Conference on the Future of Europe depends on the citizens and us, because this is an open process in which we need to decide what kind of Europe we want in the future. It is important that this process is not centralised only at the EU level, because Europe is much wider than the EU”, he pointed out

He said that young people must take part in the Conference on the Future of Europe because they are not only the future but also the present.

“We should use all the benefits of the digital platform within the Conference on the Future of Europe, the information given to us. We should use this opportunity and because changes only come if we participate in these processes,” he said.

Vojdan Uzunov, from YEA North Macedonia, stated that all the opportunities that can strengthen the European identity between young people and the EU and the Western Balkans are important.

“It is important to gather young people from Europe in one place. Sometimes there are prejudices and old ways of thinking between us, that is what we want to prevent. Such events are important for building a common European identity”, he said.

According to him, the Western Balkans is a part of Europe and that is why it is necessary for young people from the region to be part of the European identity.

“That is one of the main messages of our visit to Strasbourg. Creating an inner identity between us and cooperating with the EU further. Why not create something that we could have in the future?”, said Uzunov.

Conference of the Future of Europe is a consultation process the European Parliament, the Council and the European Commission launched this spring so that European citizens from all walks of life can present their views on Europe’s challenges and priorities. The citizens of the Western Balkans have also been included in this debate.