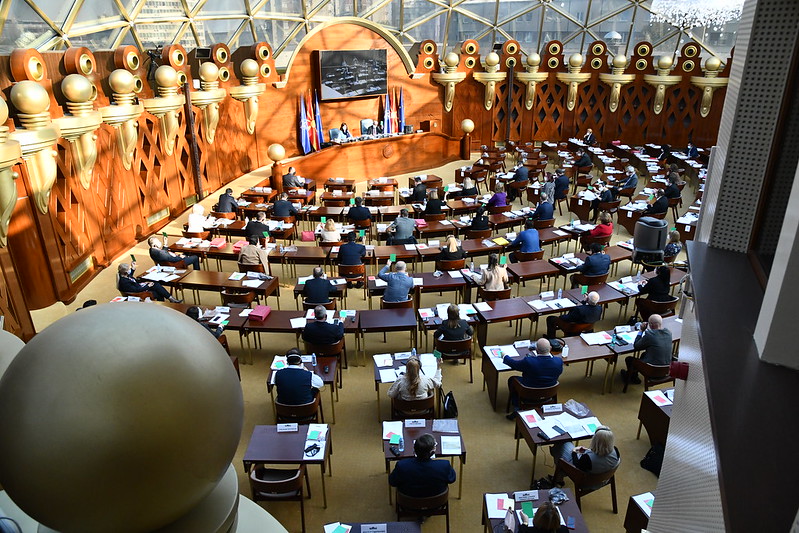 SKOPJE – Opposition parties in North Macedonia have filed a motion of confidence in the coalition government led by Social Democratic Alliance of Macedonia (SDSM) after a formation of a new majority was announced last week.

Vice President of opposition VMRO-DPMNE Aleksandar Nikoloski confirmed at today’s press conference today that an initiative for the vote has been submitted to the Parliament, reports Sitel.

“The initiative is supported by the MPs of VMRO-DPMNE and the coalition “For the Reconstruction of Macedonia”, the MPs of the coalition Alliance for Albanians/Alternative, the MPs of BESA and the MPs of The Left. A total of 61 MPs signed this initiative and 61 signatures were submitted to the Assembly. We expect (Speaker Talat) Xhaferi to convene a session as soon as possible to vote on the confidence of the government”, said Nikoloski.

Nikoloski added that he expects to have the support of even more than 61 MPs by Thursday at the latest, and informed that intensive talks are underway with several other MPs in the Assembly. The parliament of North Macedonia has 120 seats.

The news came following the losses SDSM suffered in local elections held on 17 and 31 October, after which Prime Minister Zoran Zaev announced his resignation.

In today’s Facebook post, Zaev reacted to the formation of a majority that could return VMRO-DPMNE to power.

“For a vain desire for power, they were ready to carry the country downhill, and the people to suffer. These days we are witnessing a threat to the Prespa Agreement, the Good Neighbor Agreement with Bulgaria, the Ohrid Framework Agreement, the common and equal society, peace of the citizens inside and the good relations with the neighbours”, wrote Zaev.

At today’s meeting, the leadership of Democratic Union of Integration gave its leader Ali Ahmeti the authority to talk with both political blocks, the party stated.

Bieber: Agreement is the first step to ending the decades-old dispute