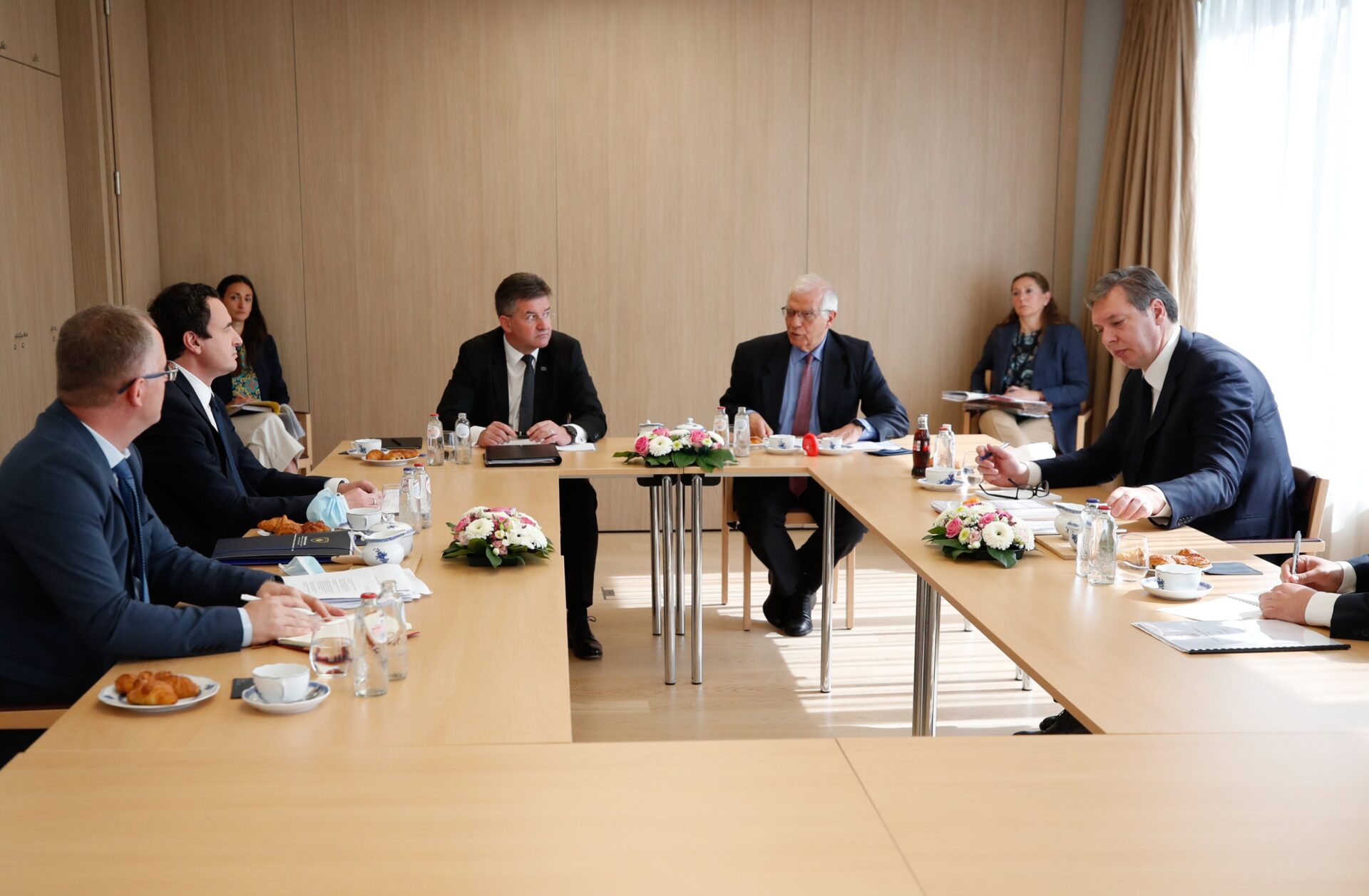 Efforts to secure an agreement between Kosovo and Serbia on the part of the international democratic community have already failed twice. In 1999, at the Rambouillet Conference, Serbia’s failure to cooperate resulted in dire consequences for the country and its people. In 2007, Finland’s President Martti Ahtisaari, speaking as the Special Envoy of the UN Secretary General for the Future Status Process for Kosovo, stated that “the parties remained diametrically opposed on the future status of Kosovo.”

Kosovo declared its independence on February 17, 2008, in close coordination with the international democratic community (the U.S and almost all of the EU members, among others). It committed itself to implement the Comprehensive Proposal for the Kosovo Status Settlement, commonly  known as the “Ahtisaari Plan”. Serbia asked the United Nations (UN) to send the case to court, and in 2010 the International Court of Justice (ICJ) issued its opinion that the declaration of independence did not violate international law.

In the aftermath of the ICJ’s opinion, the United Nations (UN) adopted a resolution that acknowledged the opinion and stated that it: “Welcomes the readiness of the European Union to facilitate a process of dialogue between the parties; the process of dialogue in itself would be a factor for peace, security and stability in the region, and that dialogue would be to promote cooperation, achieve progress on the path to the European Union and improve the lives of the people.”

It has now been a decade since the EU facilitated dialogue for normalization of the relations started, and the aspired goal of “normalization” between the two countries remains elusive.  This process, too, cannot be allowed to fail. But it requires a combined change in the attitude of Serbia and Kosovo, as well as of the EU.

The failure in the normalization process between Kosovo and Serbia will move the latter further into the Eastern bloc with even deeper strategic cooperation with Russia and China, which will be detrimental not just for Serbia but the entire region. As for Kosovo, it will formalize – especially its northern part – a state of frozen conflict. Options outside the framework of normalization of relations are limited for both sides.

Serbia would remain outside of the EU block whereas Kosovo would have far more to lose lacking not just an EU and NATO path but facing also other external constraints.

Serbia seems to have placed a bet on the incremental rise of far-right populist leaders in key Western countries, and the further normalization of far-right ideas in Europe. Kosovo on the other hand seems to view the dialogue with Serbia as a “blinking game”. Dominant thinking fails to consider how much the external environment has worsened with the empowerment of Russia and China, as well as the (often appalling) Western normalization of Serbia’s historical revisionism.

As a civil society leader from Kosovo recently stated in a round-table discussion: “while Kosovo’s friends no longer view Serbia as the enemy, Serbia’s friends continue to see Kosovo as the problem.”

A consistent and important piece of advice from Kosovo’s friends has been that the surest path to success for the country is to build its credibility as a rational actor, albeit rational behavior in the past was often not rewarded but rather undermined. Nevertheless, to move in that direction, it is important that Kosovo becomes actively involved in regional cooperation initiatives and approaches them in a constructive manner. Kosovo should take the advantage of joining regional agreements as an equal partner, to the benefit of citizens’ mobility, facilitated trade exchange and recognition of documents.

Kosovo should pursue its interest through other platforms where all Western Balkans states are included, not only Open Balkan. Kosovo should understand that by engaging and participating it has more leverage to achieve its goals than by sitting out.

Internally, Kosovo should make decisive steps towards implementation of the agreements reached in the framework of the normalization dialogue, including the establishment of the ASM along the lines of the ruling of the Constitutional Court. It also needs to implement the court decision concerning the Decani Monastery and launch a meaningful internal dialogue with the Serb-community to address legitimate concerns. It is also clear that the dialogue will have very limited chances for success without clear progress on dealing with some parts of the past, chief among them is the issue of the missing persons.

Serbia, shares the overwhelming burden in this context, and therefore must deliver on its commitments. The fact that the presumed front-runner in EU accession talks does not cooperate in a meaningful manner on the issue of the missing people – considering that war crimes were a state venture of Serbia against ethnic Albanians – is truly appalling and indicative of a lack of willingness to reach an agreement.

The EU was assumed to have learned crucial lessons in the 1990s from the violent Balkan Wars, which was clearly manifested both in the framework of the Treaty of Amsterdam of 1997 and at the Franco–British Summit held in St. Malo at the beginning of December 1998.  Resolving the Kosovo and Serbia dispute, a responsibility the EU accepted from the United Nations (UN), is not only imperative for EU’s own credibility as an aspiring geopolitical actor, but it is essential to prevent the spillover effects from an inevitable deterioration of the security situation.

The risk is not just an eventual armed conflict and refugees flocking towards the EU, but the addition of another catalysator propelling far-right populism further into the mainstream of EU member states.

The EU should seize the opportunity to work with a cooperative U.S administration and provide the incentives needed for a historic agreement centered on mutual recognition. Waiting and hoping that the weaker side will at some point budge into paralyzing compromises will prolong the agony for all involved and seriously amplify risks to regional security.

For reconciliation to eventually become a possibility, Serbia must first and foremost address the true underlining structural cause of its conflict with Albanians of Kosovo: the historic, institutional and societal racism which has lately been revived in the vernacular of state officials. Continued efforts at historical revisionism; the revival of rebranded nationalists’ pursuits (“Serbian world”); and a hegemonic attitude towards neighboring states are not only an obstacle to reconciliation, but they undermine any practical chance at normalization and regional cooperation.

Agon Maliqi is a policy analyst, activist, and media writer, as well as the co-founder and current chair of the board of Sbunker, a democracy think tank and blog based in Prishtina, Kosovo. Donika Emini, is the executive director of CiviKos Platform, member of the of Balkans in Europe Policy Advisory Group (BiEPAG) and a PhD Candidate at the University of Westminster, London. Florian Qehaja, is the co-founder and chair of the board of the Kosovar Centre for Security Studies (KCSS) and holds a PhD from the Faculty of Social Sciences, University of Ljubljana. Leonora Kryeziu is a lecturer at the University of Prishtina “Hasan Prishtina” and the executive director of the Prishtina Institute for Political Studies (PIPS) Ramadan Ilazi holds a PhD in politics and international relations from the Dublin City University (DCU), and he is a former deputy minister for European integration in Kosovo.

IPAP and defense industry of Serbia – benefits and recommendations

Šekerinska: Skopje will host the biggest NATO conference for public relations and...

[EWB Interview] Pašić: BiH needs to create an environment in which corruption...