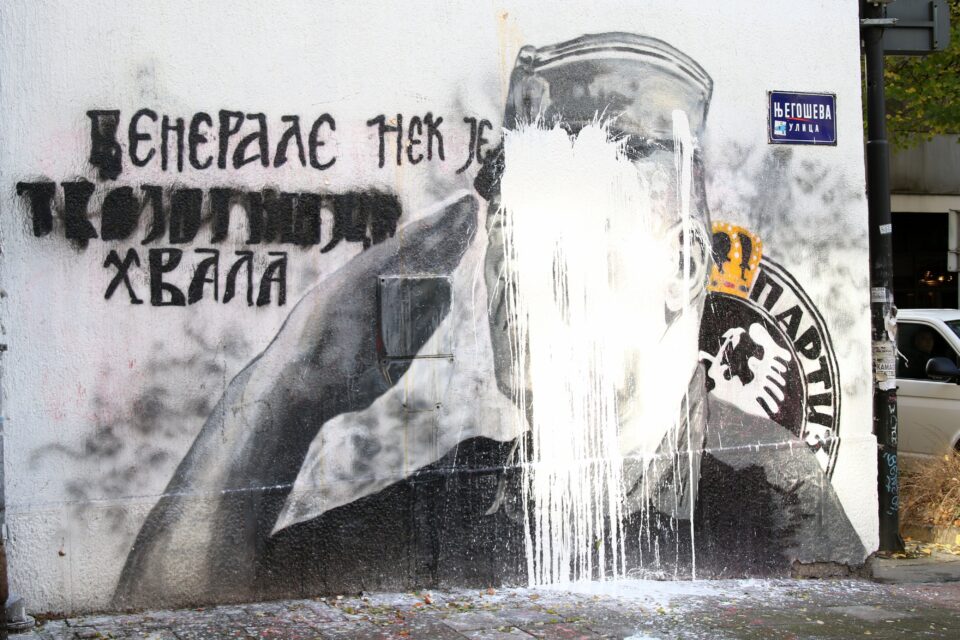 This week’s events in Serbia have shown that state is willing to to defend the mural of convicted war criminal Ratko Mladić, which only exposes the government’s close ties with right-wing and hooligan organisations, EWB interlocutors assess. Apart from the criticism of some Members of the European Parliament, there have been no sharper reactions from Brussels.

Serbian police arrested civic activist Aida Ćorović and illustrator Jelena Jaćimović on Tuesday for throwing eggs at a mural of Bosnian Serb wartime general Ratko Mladić, painted on the wall of a residential building in downtown Belgrade. The story of the mural started in July, when an unknown group of hooligans illegally painted mural on the wall with the slogan “General, your mother should be thanked”. The graffiti has been damaged several times ever since it appeared, but it has been repaired within hours every time.

On 9 November, dozens of policemen blocked the access to the area around the mural after human rights groups and other activists vowed to paint over it to mark the International Day Against Fascism and Antisemitism. Authorities said afterward that police were not protecting the mural but ensuring “public order and peace from all those who want to endanger it, regardless of whether they are in favor of removing the mural or oppose this”.

Critics of the anonymous tribute say Interior Minister Aleksandar Vulin’s ban on a gathering to remove the Mladić mural and the heavy police deployment signal tacit endorsement of a person behind one of the most horrific atrocities in Europe since World War II, Radio Free Europe (RFE) reported.

Florian Bieber, Professor from University of Graz and coordinator of the Balkans in Europe Policy Advisory Group (BiEPAG), assesses for European Western Balkans that the recent events have revealed that the government clearly protects hooligans and tries to keep ordinary citizens away.

“Shocking difference in the behaviour of the police between the attempt to cover or disfigure the mural and the thugs and hooligans who clean and guard it means that the government both supports and collaborates with this nationalist hooligans and does not want to confront a mural which not only depicts a war criminal (who was extradited by Serbia after all) but is also illegal”, says Bieber

According to him, this is just the latest manifestation of the government obstructing a critical reflection on the past.

“There have been numerous similar signs and steps, from promoting war criminals who return in the ruling party to constant praise of war criminals in some media close to the government to the lack of effort to reduce hate speech in the public space”, underlines Bieber.

Srđan Cvijić, BiEPAG member and a Senior Policy Analyst at the Open Society European Policy Institute in Brussels, says that a decision of the regime to engage police to protect the graffiti made to honour the war criminal Ratko Mladić is only an external manifestation of the relationship between the regime and hooligan groups involved in organised crime.

“The relationship between the Serbian regime and the organised crime hooligan groups was established several years ago without any doubt. If someone had doubts before, this relationship became obvious in May 2017 during the inauguration of the then newly elected President of Serbia Aleksandar Vučić, when prominent members of the organised crime hooligan groups acted as security of the inauguration and physically attacked and unlawfully detained, journalists from independent media who came to report on the event and citizens who came to peacefully protest against the President“, Cvijić explains.

He adds that a consistent policy of Aleksandar Vučić, ever since he “came to power in 2012, is to normalise the nationalist values that reigned in Serbia in dark 1990s while simultaneously trying to make peace with its neighbours and to put the perpetrators of horrendous war crimes committed in the name of the Serbian people on trial”.

Should the EU pay more attention towards the attitude to war crimes in Serbia?

Serbia is still far from making real progress regarding war crimes trials, although this issue is part of Chapter 23, which is key for the accession of Serbia to the European Union.

This-year EC report assessed that Serbia has a very weak track record in the processing of war crimes cases.

“Overall, Serbia needs to show a genuine commitment for investigating and adjudicating war crimes cases. This is also a requirement for effectively dealing with the legacy of the past and for fostering reconciliation. Serbia should prioritize complex cases and those involving senior ranking officials and provide a clear legal approach to resolve the issue of command responsibility”, EC Report on Serbia assessed.

A joint statement by several Members of the European Parliament from the Progressive Alliance of Socialists and Democrats, Renew Europe and Greens/European Free Alliance, condemned the authorities and President Aleksandar Vučić, saying it was unacceptable for the police to guard a mural of a convicted war criminal in the country, which is a candidate for the European Union membership.

The statement pointed out the murals of Ratko Mladić, a Bosnian Serb general convicted of war crimes in Bosnia and Herzegovina and genocide in Srebrenica before the International Criminal Tribunal for the former Yugoslavia and others like him can be found throughout Serbia.

“It is utterly unacceptable for an EU candidate country to deploy its police to protect a mural of a convicted war criminal, who is directly responsible for atrocities and mass killings in and around Srebrenica in July 1995, thus directly contributing to the re-traumatization of the victims. We urge Serbian authorities to stop denying the Srebrenica genocide and glorifying convicted war criminals as it goes against all European and universal values of fundamental and human rights“, the MEPs statement reads.

Srđan Cvijić says that this regime has absolutely no intention to deal with the war crimes and the murderous legacy of Milošević’s regime.

“Ever since 2012, when Vučić’s party came to power, pro-government media feed the population with a daily dosage of anti-Western, pro-Russian, and nationalistic propaganda. The difference with the period before they came to power is striking. While the pre-2012 government extradited war criminals such as Ratko Mladić and Radovan Karadžić to the International Criminal Tribunal for the former Yugoslavia (ICTY) in the Hague, this government is honouring convicted war criminals, as we see with recent deployment of the police to protect the graffiti of Ratko Mladić”, says Cvijić.

He adds that it is difficult to say whether recent events will prevent the EU from opening new negotiating clusters with the Serbian regime.

“Since we are witnessing only regression in the rule of law and democratisation fields in Serbia, this decision was not justified even before the recent events over the graffiti. Yet, the recommendation to open the clusters was issued from a desire to ‘encourage’ the authorities in Serbia to reform, but more so to kick start a seemingly moribund EU accession negotiations process. Whether recent events will make it difficult for some EU member states to agree with the opening of the clusters it is difficult to judge, but I am just afraid that the regime in Serbia will spin a potentially negative decision as ‘anti-Serbian’ and not as a logical consequence of the consistent ‘Orbanisation’ of Serbia by the Vučić regime in the last decade”, underlines Cvijić.

Florian Bieber assesses that the events and also the citizen’s protest highlight that one has to take a larger view on the issue.

“I am surprised how technocratic the understanding of reforms by Commission still is. I am not seeing the progress that von der Leyen recently noted during her visit or the report suggests which would merit the opening of new clusters. Maybe the events and also the citizen’s protests highlight that one has to take a larger view on the issue. It would be understandable if the government was struggling with confronting hooligans and extreme nationalists, but the recent events show that they are collaborating and there is no honest effort visible by the government to deal with revisionism and denial of war crimes”, Bieber concluded.

Zaev’s government carries on as a non-confidence initiative fails