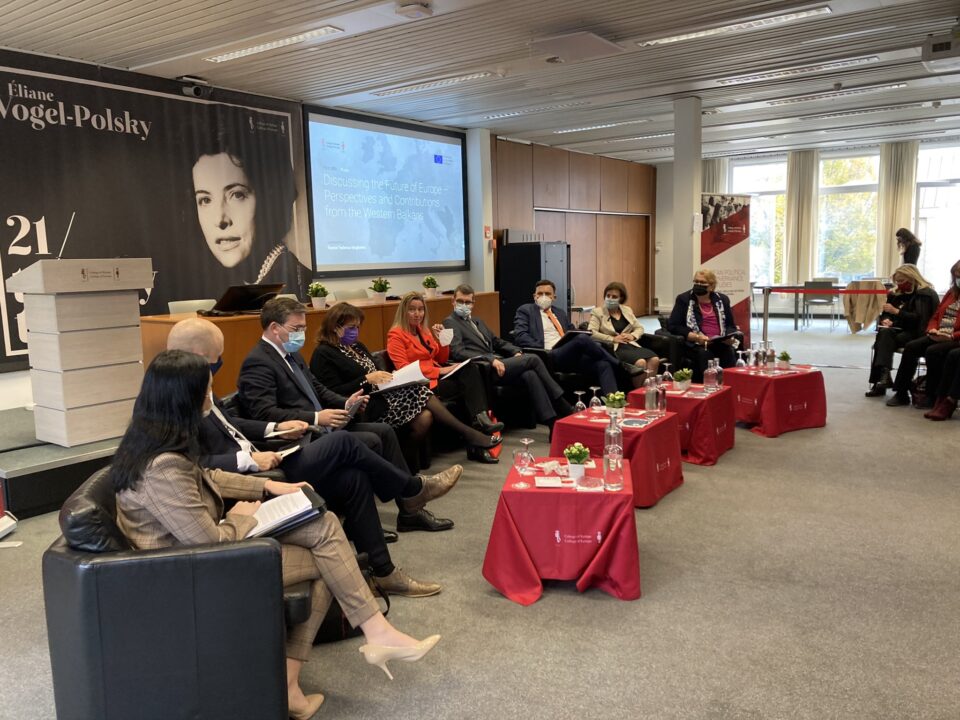 During their opening remarks, several Ministers called for the EU to play a more robust strategic role in the Western Balkans, which would include the acceleration of the enlargement.

“A credible enlargement policy is an investment in Europe’s stability. The region is securing important energy and road infrastructure for the Europe. Albania has met the conditions for the first Intergovernmental Conference and it is time to move forward”, said Megi Fino, Deputy Minister for Europe and Foreign Affairs of Albania.

Similarly, Minister of Foreign Affairs of Bosnia and Herzegovina Bisera Turković said that the EU needs to move away from a lax attitude towards the region.

“The latest event at the borders of Belarus and Poland are a call for a more proactive and assertive role of the European Union. This approach is needed in the Western Balkans as well. The EU cannot allow the Western Balkans to be pulled back in the crisis like the one in the 1990s, and this is happening before our eyes”, Turković said.

Before giving the floor to the students, Rector of the College of Europe and former High Representative for Foreign Affairs and Security Policy Federica Mogherini pointed out that the eastern and southern neighbours of the European Union have a dedicated scholarship to study at the College, which was not the case with the Western Balkans and that perhaps a good institutional initiative would be to establish such a scholarship.

Several students asked the Foreign Ministers whether the lack of EU engagement and the enlargement fatigue has led to the rise of nationalism and a political turmoil seen in Bosnia and Herzegovina in recent weeks. One of the students also asked whether the EU carries the same weight for the Western Balkans as it did ten years ago given.

Other questions coming from the students tackled the barriers between the citizens of some countries in the Western Balkans, for example due to the visa requirements that still exist between Kosovo and Bosnia and Herzegovina.

One of the questions was also how the debate on the future of Europe would continue following the formal conclusion of the Conference in Spring 2022. Vice President of the European Commission Dubravka Šuica, who also participated in the discussion, said that the Commission was thinking of making the digital conference platform a permanent feature and that it was the best tool for the Western Balkans to use in order to participate in the Conference.

Minister of Foreign Affairs of Kosovo Donika Gërvalla-Schwarz agreed that there was a lack of communication between some countries of the region. This was caused, Gërvalla-Schwarz said alluding to Serbia, by the lack of apology for the crimes committed in the past as well as endangering the future of Kosovo.

When it comes to the assets of the Western Balkans, Gërvalla-Schwarz pointed out that the population of Kosovo is very young on average and that this was also the case in other Western Balkan countries.

Minister of Foreign Affairs of Serbia Nikola Selaković disagreed with the characterisation coming from the Minister Gërvalla-Schwarz, saying that a country endangering peace and stability in the region would not be receiving the amount of foreign direct investments from EU countries Serbia was receiving.

On the issue of European integration, Selaković highlighted the moving targets set for the Western Balkan countries, which, he said, did not exist in the previous rounds of enlargement.

“We are running the marathon, and at the 40th kilometre, somebody is saying to you that you have to run another 20 km – who is going to survive that?”, Selaković asked.

On the issue of the future of Europe, he asked the College students whether anyone of them had started a family yet, saying that raising one’s children in Europe is s proof that Europe is the best continent to live on and the best contribution to its future.

Minister of Foreign Affairs of Montenegro Đorđe Radulović also spoke about the need of the EU need to show the Western Balkans that it is not a moving target.

“Everyone is talking about the carrot-and-stick approach, and we need more carrots”, Radulović said.

He added that, in the Western Balkans, people are still talking about some “obsolete ideas” from the 18th century such as nationalism, while the European Union is struggling against climate change.

“The 20th century was the time of great ideologies, let’s have ecology as the new ideology that can unite us all”, Radulović said.

Federica Mogherini concluded the event with her own arguments in terms of the enlargement to the Western Balkans.

“This is the only case where enlargement coincides with reconciliation. And this is the basis for security and economic development. And also, sometimes the Europeans do not consider the cost of not doing something. We should ask ourselves what could be the alternative if we do not do it in 10 and 20 years”, Mogherini said.

Speaking about the divisions of opinion seen at the panel, Mogherini said that they do exist, but they are a part of democracy and part of European history.