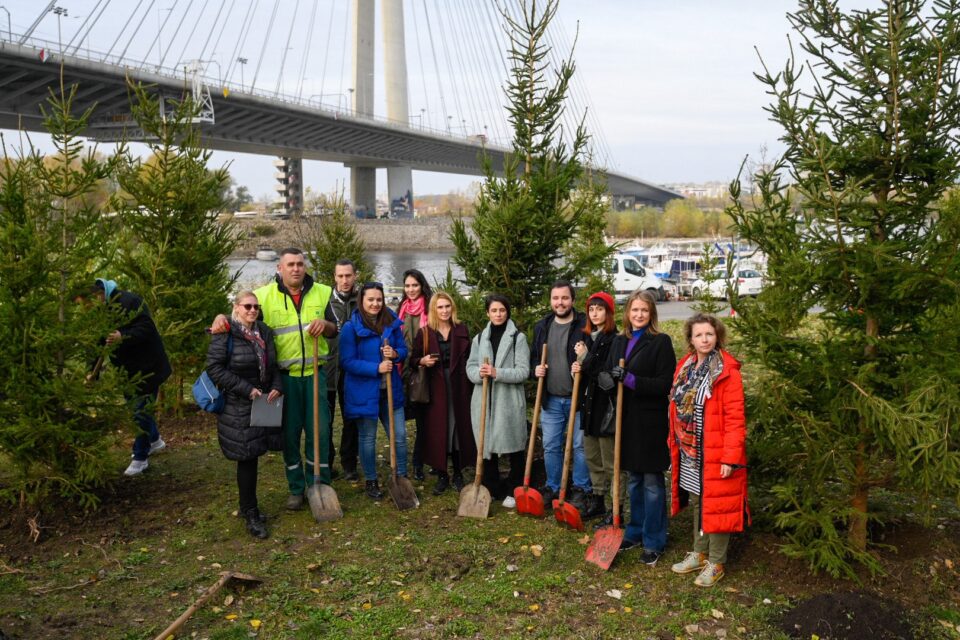 A total of 400 tree trees were simultaneously planted today in Belgrade and several other cities in the region as part of this year’s “Trees of Friendship” action, which was jointly implemented by European Fund for the Balkans (EFB) and its local partners.

Cities across the Western Balkans share a major environmental problem, namely dangerous levels of air pollution. Hence, the goal of this initiative is to send a strong joint message that regional cooperation and solidarity can also contribute to solving that issue and creating conditions for clean air, EFB statement reads.

“Last year, the regional action ‘Trees of Friendship’ and the trees that were planted across the region were a symbolic compensation for the damage made by the CO2 emissions which occurred due to EFB’s business travels in 2019. This year we organised the planting  to additionally accentuate the importance of each tree for the quality of the air we breathe. Once again, the whole region is the most polluted part of the continent, so this year’s regional planting is also an announcement for our joint campaign “United Balkans for Clean Air”, which will start soon”, said Aleksandra Tomanić, Executive Director of the European Fund for the Balkans.

The joint “Trees of Friendship” action, as well as the entire campaign “United Balkans for Clean Air”, is realized with the support of numerous organizations: For Clean Sarajevo from Sarajevo, Eko Forum from Zenica, Environmental Territorial Management Institute from Tirana, Sbunker from Pristina, Air Care from Skopje, OZON from Podgorica, RERI and Belgrade Open School from Belgrade, and Pro.Tok21 from Smederevo.

“We are most pleased to again be part of the regional ‘Trees of Friendship’ action, whose specific activities draw public attention to the need of improving the quality of the environment in the Western Balkans and encourage intersectoral cooperation and citizen involvement in efforts to reduce the negative effects of climate change and air pollution. This year, the ‘Trees of Friendship’ action in Montenegro bears a special symbolism, as the number of planted trees corresponds with the marking of 30 years since Montenegro declared itself an ecological state… Our thoughts today are with our colleagues from Sarajevo who are unable to implement the action due to the floods, and we hope that conditions will be created as soon as possible for the capital of Bosnia and Herzegovina to be enriched with a new tree line, too”, said Aleksandar Perović of the Ecological Movement OZONE, Montenegro.

With this action, the European Fund for the Balkans and its partners are announcing the imminent start of this year’s “Balkans United for Clean Air” awareness campaign at the beginning of December. It will continue to inform the citizens of the region about the causes and consequences of air pollution and possible solutions thereof, as well as the fight for a healthier environment through regional solidarity.