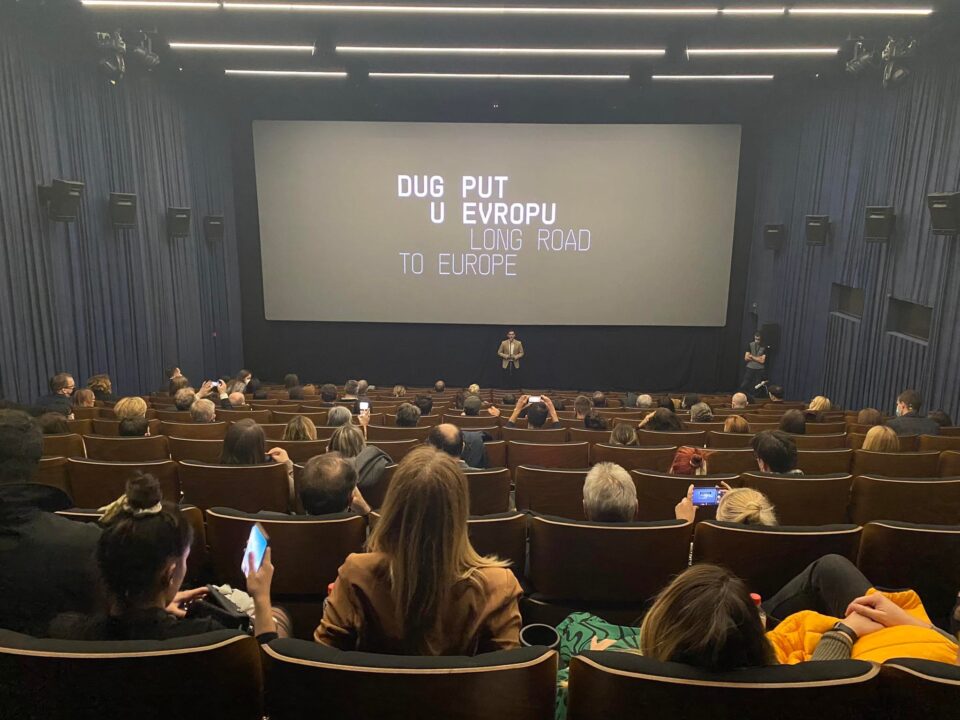 Premiere of the documentary "Long Road to Europe"; Photo: EWB

BELGRADE – The premiere of the documentary “Long Road to Europe”, produced by the European Western Balkans portal and Panorama Films, was held last night in Belgrade.

This is the first documentary on the topic of the European integration of Serbia. It covers the period beginning with the 2000 democratic changes, the assassination of Prime Minister Zoran Đinđić, the adoption of the Stabilisation and Association Agreement and the abolition of the visa regime with the EU, until the beginning, and then the current stalemate of the membership negotiations.

As was emphasised in the credits, Prime Minister Ana Brnabić and the Minister for European Integration Jadranka Joksimović did not respond to the invitation to participate in the documentary.

The event was attended by the ambassadors of the EU member states, the Deputy EU ambassador to Serbia Mateja Norčič Štamcar, former members of the European Parliament Eduard Kukan and Knut Fleckenstein, representatives of civil society and the media.

“This is not just a documentary, this is a testimony of one time and one process. It is also a testimony of missed opportunities, but also of the challenges that Serbia has faced on the road to the EU, which has lasted for more than two decades”, said the author of the film, journalist Filip Lukić, at the opening.

He also announced that the film will soon be shown on N1 television.

The film was supported by the Embassy of the Kingdom of Sweden and the Belgrade Open School, as well as the European Fund for the Balkans.

“I think the film is coming at the right time, for me, as someone who recently came to Belgrade. It is a very useful recap of the ups and downs of Serbia’s path to the EU”, said the Ambassador of the Kingdom of Sweden, Annika Ben David.

The Executive Director of the European Fund for the Balkans, Aleksandra Tomanić, pointed out that the film raises questions about what has been done in the last two decades and what should have been done differently.

“It is very painful to see the failure of the previous twenty years, especially for us older people who believed and contributed to the process, for younger people it may be abstract, but for us it is very painful,” said Tomanić.

The executive director of the Belgrade Open School, Miodrag Bjeletić, stated that the film reminds why the process of European integration began in the first place, and that the supporters of Serbia’s European future can only continue where the film left off.

The screenplay was written by Filip Lukić and Nikola Burazer, while Marija Kovačina served as the film’s director and editor. The executive producer was Emina Muminović, and the director of photography was Andrija Kovač.

Economic and Investment Plan important for youth employment in the region