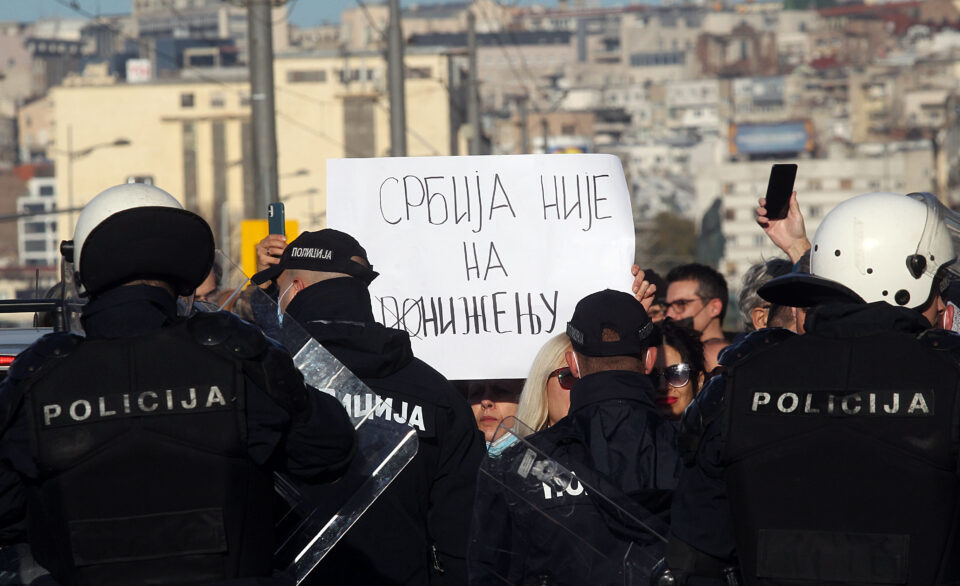 "Serbia is not for sale" sign in Belgrade; Photo: FoNet

Citizens of Serbia blocked several motorways across the country yesterday in a response to the adoption of the Law on Referendum and Law on Expropriation earlier this week. The adoption of the laws is seen as laying groundwork for the lithium mine of the international company Rio Tinto in western Serbia, which has been met with serious opposition from the Serbian public. The protests ended up with multiple arrests and a violent conflict in the city of Šabac.

The protests were initiated by the activist groups “Kreni-promeni”, “Ecological uprising” and “Assembly of Free Serbia” and supported by some opposition parties.

Activists groups held a protest in front of the Presidency of Serbia earlier this week, warning that they would call for a blockade of roads during the weekend if the controversial laws were adopted by the parliament. After the adoption, they called the citizens to block roads in their cities between 2 and 3 p.m. on Saturday.

The country is once again going through violent protests, following the ones in July 2020. Another protest has been announced for next Saturday.

Masked men and a bulldozer deployed against protesters in Šabac

The most serious incident occurred in the city of Šabac, where unknown people tried to drive through the group of citizens blocking the road with a bulldozer. One of the protesters managed to climb to the bulldozer cabin and started beating the people inside.

The violent incident was widely shared on the social networks.

Protesters in Šabac were also attacked by the masked people carrying bats and hammers. According to the  leader of the opposition party Together for Serbia party and former mayor of Šabac Nebojša Zelenović, this has happened after the police had withdrawn from the scene.

“Police withdrew and let the mafia carrying weapons, bats, hammers, to attack us, dispersing the people who were peacefully protesting, to enable the passage to SNS busses which were on their way to their congress”, Zelenović said.

The congress of the ruling Serbian Progressive Party (SNS) took place simultaneously with the protests. The party elected new leadership. It was agreed that President of Serbia Aleksandar Vučić will remain at the helm of the party at least until the elections on 3 April.

Nebojša Zelenović announced that the state was defeated yesterday.

“The people were attacked and we are horrified with the inability of any institution to defend the people who were simply here to express their disagreement with the catastrophic laws. This is leading to conflicts, this is leading to unrests, nobody needs that”, Zelenović said on his social media accounts.

Serbian Progressive Party has been accused of cooperating with the persons of potentially criminal background ever since the inauguration of President Aleksandar Vučić in 2017, when some of the people investigative journalists connected to the criminal clan of Veljko Belivuk violently removed journalists gathered at the scene.

More recently, men dressed as football hooligans came to protect the mural of Ratko Mladić in Belgrade, against which activist groups were protesting. These groups accused the state of protecting both the mural and the hooligans.

Arrests across the country

The media reported that multiple persons have been arrested for participating in the protest, including six people at the Valjevo-Loznica motorway and about ten people who blocked the Varadin bridge in the city of Novi Sad. Opposition Freedom and Justice Party announced that its members were arrested in Zrenjanin and demanded their release.

“Skupština slobodne Srbije” (Assembly of Free Serbia), a group of public intellectuals and one of the initiators of the protests, also called for an immediate release of the arrested.

“Assembly of Free Serbia demands from the competent state bodies that all citizens who were arrested today because they peacefully protested against the recently adopted, catastrophic laws and the government, which is steeped in violence and corruption, be released immediately”, the statement reads.

It called the domestic and international human rights organizations to react urgently and also demand the release of the demonstrators, as well as to condemn the excessive use of police force during today’s protests.

“The Assembly of Free Serbia believes that the citizens have shown high self-awareness today and that they sent a strong message to the authorities by blocking the roads that its end is near and that they will no longer peacefully suffer its arbitrariness and enslavement of society and institutions”, the statement reads.

Protests in the capital of Belgrade concluded mostly peacefully. However, an incident was also shared on the social media showed a policeman violently pushing a woman over the road fence.

Minister of the Interior Aleksandar Vulin joined the police which gathered at the scene in Belgrade. He was met with boos and jeering of the protesters.

The adopted laws suspected of enabling the Rio Tinto mine

Environmental groups and opposition parties have been protesting for months against the arrival of Rio Tinto to the region of Loznica in western Serbia. Rio Tinto is an international mining company with a bad reputation of causing great environmental damage at its previous mining sites.

Rio Tinto is expected to open a mine of jadarite, a variant of lithium, which was found in the region in 2000s. It is a mineral of high demand in the production of batteries and electric vehicles.

The opponents of the project, however, believe that it would cause a huge environmental damage to the site. Some experts have pointed out that mines like these are usually opened in deserted areas, which would not be the case in Serbia.

Government of Serbia has stood behind the project, claiming it would bring economic benefits to Serbia. However, President of Serbia Aleksandar Vučić announced that the citizens of the region might go to a referendum to decide on whether the project will be launched or not.

The protesters believe that the amended Law on Referendum and People’s Initiative, adopted this week, would enable government to manipulate such process.

They also believe that the amended Law on Expropriation, which enables the Government to take away property if it deems it to be in the public interest for any “project of importance for the Republic of Serbia” was adopted to suit the interest of Rio Tinto project.

[EWB Interview] Hackaj: We need to promote best examples of youngsters that make a change in the region